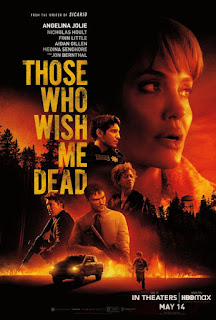 You don't seem to see the once-prolific Ms. Jolie in much these days but my wife is a fan (shouldn't that be the other way around?) so this recent HBO novel adaptation was very much on the agenda as soon as it was available. Set in the wild country of Montana, it stars her (Jolie, not my wife) as Hannah, a former 'smokejumper' (someone who is parachuted to the site of a wildfire to provide first response action and advice about directing further firefighting efforts). She is now stationed at a fire lookout tower after three young campers recently died on her watch leaving her traumatised and unsure of herself. Stumbling into her neck of the woods (chortle!) is Owen, a forensic accountant on the run from some hoodlums with his sole remaining child Connor (Little), after said hoodlums whacked his boss and family when Owen discovered some nefarious activity on the part of their boss Arthur (Perry). When Owen is fatally shot, he gives the evidence to young Connor and tells him to run. 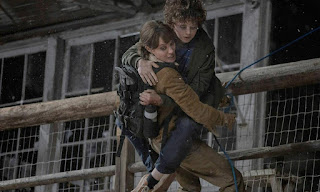 I'm sure before I even got that far in detailing the plot, many of you could have taken over without even seeing the film - child encounters haunted hero, hero sees a chance for redemption by doing anything to save defenceless child, ruthless bad guys killing and destroying in effort to catch them, etc. Yes, it's all very blah, blah, seen it a million times before. In fact, the style is similar to the many action-thrillers I watched a lot growing up. Most of them featured unknown actors or old stars past their prime, and most were decidedly average at best, often featuring wooden acting and low budgets, and I can't help thinking TWWMD wouldn't be too off that itself if it wasn't for the star power provided by Jolie. Her mere presence here in addition to the generally higher standard of acting do at least help the film to stand out. 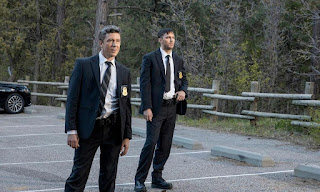 Indeed, the supporting cast is very decent, most notably Jon Bernthal as the local Deputy Sheriff who starts investigating after finding Owen's body, Medina Senghore as his pregnant wife, and of course Aidan Gillen and Nicholas Hoult as the two suitably-intimidating goons hunting Connor. The production values are also far better than the bulk of the older action-thrillers this film reminds me of, and they do of course include a good few well-shot fiery scenes. It's not all action either; there is a bit of emotional heft in addition to the often-frantic action, and there are some genuinely tense scenes too, both of which are helped by Jolie's decent performance. It's a perfectly enjoyable throwback while it lasts too - something probably helped by the trim runtime - but don't expect to remember it in a few weeks.