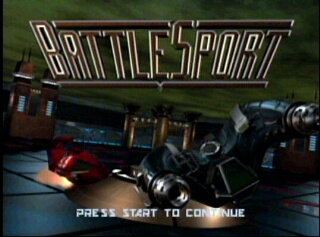 Future sports games have been around a good while now, but it's a funny genre. It's bound by practically no rules, unlike most 'real' sports games, and so has almost limitless potential. Imagine the possibilities of not only creating a new sport from scratch, but having it use technology that hasn't even been invented yet! There's almost nothing that you couldn't incorporate, realistic or not. So how is it most of them suck ass? There are a few exceptions, of course, such as Speedball 2 (although I never got into it personally) and others, but the genre has few offerings of note. BattleSport, for a short time a 3DO exclusive, was one of the first to try things in 3D, but did it work?

Well, the intro certainly gets you pumped up for the game! It shows a rendered representation of the final moments of an apparently epic BattleSport match! For BattleSport is a 'sport', played over three two-minute periods in a large, self-contained arena. In this arena is a ball, which is where the 'battle' part comes in. Each match is contested by two players, both piloting a hovercraft/tank type vehicle equipped with lasers and missiles. Using these armaments, the players must fight for control of the ball which is used to shoot at a floating goal. A successful shot will result in a goal! You can collect a loose ball simply by flying into it. Once you gained possession of it, you'll have only a few seconds to find the goal and shoot before you 'fumble' it. It's also possible to force an opponent into a fumble before he shoots the ball by shooting him with your lasers/missiles! Of course, they will also try this tactic on you as well!

Before you start a match, you can select from six different tanks, each of which varies with regards to its armour, speed, firepower, cornering etc. They can also perform small jumps, which are used primarily for avoiding enemy missiles, and they are also equipped with a radar which shows the location of the ball and your opponent. Each tank has an energy meter which is depleted by laser and missile fire. When this happens, the craft will be disabled for five seconds or so giving the aggressor a few precious seconds of peace to grab the ball and line up a decent shot. However, the goal can be found in different places depending on which arena the combat is taking place in. It generally hovers above the ground, but it can be of several different types. The easiest to score in is the standard four-sided goal. Variations include two and one-sided goals, moving goals and spinning goals. Scoring is achieved, simply by shooting the ball into the goal but considering you often have to take your shot while moving or under fire, it can take a lot of skill!

Selection of the arena you battle in is random during competitive play, but you can choose your own in a 'quick match' or two-player match, and there are some fifty to choose from. Some of them take place in the day, some at night, and they come in three sizes (small, medium and large, believe it or not). Each is also home to different obstacles, power-ups, hazards and rewards. Talking of the power-ups, there are a large number available. Some can be found lying around arenas and others can be bought in the equipment store, and they come in many forms. They can include offensive/defensive items such as super missiles, super shielding, double damage, ECM's (confuses enemy's targeting system), and heavy lasers. Others can affect the outcome of a match in a different way such as adding a period to the game, goal freeze, ball freeze, ball attract, flight, health restore, invisibility, super speed, and radar jammer. 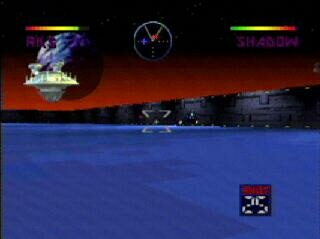 If you read through all of that, you're pretty dedicated to finding out about this game! It is at least a little noteworthy, though, what with being one of the few good games (or one of the few games, for that matter) to appear on the ill-fated 3DO system. Graphically, it's not the prettiest game on the 3DO and there's not a lot of variety, but it doesn't look bad. The sound is pretty good though, with some decent effects and suitably dramatic music, not to mention an ultra-hyped commentator! Like most sports games however, future-based or otherwise, BattleSport is essentially a two-player game. There is a tournament mode but it gets hard really quickly and the computer predictably favours itself, so it can prove pretty frustrating, but I'm sure this was designed as a two-player game anyway. The tanks can prove hard to control at times, but since this is a problem that effects both players equally, it doesn't detract from the game too much, and it's very entertaining to play against a friend. It doesn't really have a lot of competition on the 3DO, admittedly, but if you have one and a friend, give this a go.