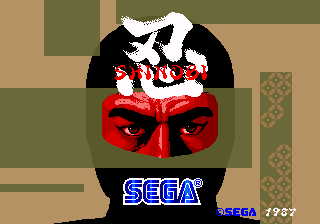 Ninjas are cool. Everyone knows that, it's just one of those facts everyone automatically accepts. These masters of stealth have many abilities beyond the use of martial arts and the awesome weapons they employ, not least their magical abilities which include invisibility, teleportation, shapeshifting, command over birds and beasts, and various others. How could they not rule? In the 80's they became popular in the West thanks largely to their depiction as mysterious yet highly skilled warriors, either good or bad, in various low-budget films such as the classic American Ninja. Inevitably various videogames followed soon after, although on this occasion with good reason - ninjas characters are ideal to build a game around, and there were many superb offerings. One of the earliest and most popular was the intriguingly-named Shinobi.

Like many of the ninja-based games that appeared, Shinobi (which, incidentally, is another word for ninja) is a platform- based combat/shooting game which takes its basic gameplay cues from Namco's Rolling Thunder, released the previous year. Taking the starring role here (and indeed in subsequent games in the series) is Joe Musashi, master ninja, who must battle the 'Zeed' crime gang over five levels, or missions, to locate and rescue the children of the Oboro clan who were kidnapped by Zeed. Each level is split into several stages (usually three or four) and ends with a boss battle against a leader of the Zeed. Once the children have been saved and the 'Ring of Five' (the Zeed bosses) defeated, it's time for Joe to celebrate!

Let's not get ahead of ourselves though, there are far more enemies to deal with than just the Ring of Five. The stages are set in such locales as city streets, dockyards, warehouses, etc, and each is predictably populated by many lesser-skilled goons too, initially consisting of gun-wielding thugs, baldy-musclemen who fling their scimitars at you, and even a few spider-men (although these are probably just ninjas in coincidentally-coloured outfits). Later on, different kinds of enemies appear such as mercenaries with bazookas and other ninjas wearing highly unstealthy-coloured outfits and they're all just waiting to chop Joe into sushi! Indeed, contact with the enemies themselves bumps him around a bit and even the merest contact with any of their weapons causes his death and he must return to the beginning of that stage (although all children rescued up to that point will remain rescued).

Joe has a variety of weapons at his disposal to dispatch these hoodlums. From afar he can fling shurikens, of which he has an unlimited supply, and in close-quarters combat he can punch and kick his foes. There is also a power-up available, obtained from one of the hostage children, which replaces the shurikens with explosive bullets of some sort and also grants Joe a katana blade to save his knuckles from any unnecessary wear and tear. He is also able to unleash ninja magic once per stage which basically acts like a smart bomb, clearing the screen of enemies and damaging bosses. Lastly, there is also a between-stage bonus round where hoardes of ninjas run along platforms and jump closer and closer to you. The object is to take them all out, for which you'll receive an extra life, but if a ninja makes it close enough (as in the screenshot), you've failed.

Many of the stages throughout the game feature more than one platform level - for example, you can jump from the street up to a rooftop or jump from one side of a tall fence to the other, that kind of thing. It's a handy feature 'borrowed' from the aforementioned Rolling Thunder and improved upon, which not only enables you to gain access to the kidnapped children hidden there, but also allows a handy escape route when you find yourself in a hairy situation. It works well too and adds a lot to an already playable game. Shinobi is also a very nice looking game too. It doesn't really break new ground or do anything fancy but it's a nice looking game all the same. The stages are all instantly recognisable and the sprites, though not featuring a great deal on animation, are nicely drawn. Sound effects are pretty minimal but decent enough, although Joe makes a grunting sound every time he jumps which soon irritates. Also accompanying the action are several authentic, Eastern-flavoured tunes which get repeated every few stages. They're okay but pretty quiet and to be honest I only really noticed them when I thought to listen out for them. Still, perhaps that was intentional, in keeping with Joe's stealthy exploits.

To be honest, as is often the case since starting Red Parsley, playing the arcade version of this great game represents my first real experience of it, certainly besides the first couple of stages. I had the Master System version and played it to death, but I didn't discover the arcade version until later. It's much tougher and I couldn't get very far without the assistance that MAME offers! I'm sure I could get much further now I've had a chance to practise though, and the game is supremely playable throughout. The difficulty curve is spot-on and the multi-tiered gameplay gives it a nice, fresh feel. Shinobi is still regarded as one of the best ninja-based platform/combat games, and it's easy to see why. A classic through and through.