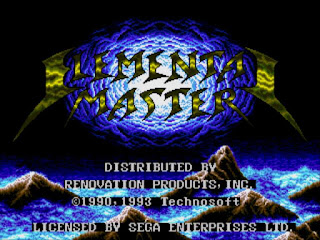 If you mentioned the name Techno Soft to, say, ten retro gamers, it's a safe bet that at least nine of them would reply with the words Thunder Force, with the remaining reply possibly mentioning Dragon's Fury or perhaps even Herzog Zwei. I'm confident, however, that none of them would mention this game, and that's both odd and a bit of a shame for it's a little known but far-from-shabby vertical-scroller that is well worthy of anyone's time. Having owned the Japanese version since it came out, though, I've never been too sure about the story, but it was quite clear that it was set in a world about as far removed from Thunder Force's futuristic space battles as possible, with this conflict being waged over ground by sorcerers wielding magical arts, not to mention hordes of mindless-yet-malevolent evil minions they've managed to summon to their cause! 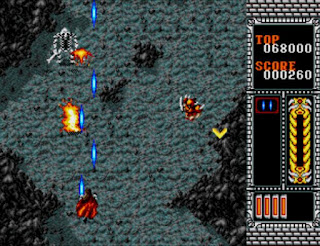 However, thanks to the wonders of emulation, I've now played the US version of the game and found the following... Long ago in the ancient kingdom of Lorelei there dwelt an evil rapscallion called Gyra whose followers were imprisoned in the dungeons under the city's huge castle. However, a seemingly heroic sorcerer called Aryaag then betrayed the king and unleashed the power of Gyra on the kingdom. Laden, the strongest sorcerer in the kingdom, was ready to defend the people when Aryaag revealed himself to be Laden's brother, Roki. Banished from the kingdom by his treacherous brother, Laden must now harness the power of the elements themselves to stop Roki from spreading the will of Gyra and end the suffering once and for all. With all this in mind, not to mention the game's name, you could be forgiven for thinking that this game has something to do with the elements, and you'd be right. 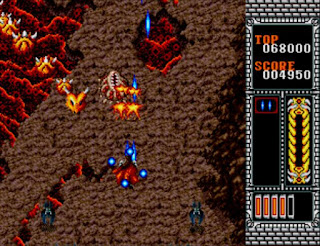 There are seven vertically scrolling stages in total and you can choose to tackle the first four in any order you wish. Each is based on an element and, upon completion, will award you with the relevant magic for use from that point onwards. For example, completion of the fire level gives you... fire magic! You start the first stage with a basic twin-shot but each magic you subsequently obtain is a different type of shot which can also be charged by holding down the fire button to unleash a more powerful magic attack. There are a few other items too, which can be obtained by shooting the treasure chests that are found periodically. Probably most useful is the purple sphere called the 'Lila Sphere' which provides a shield around Laden, protecting him for a few hits. There is also a mirror which creates duplicates of our hero that follow behind him duplicating his fire, grapes, which restore two energy points, and a holy grail which increases your energy meter by one point. 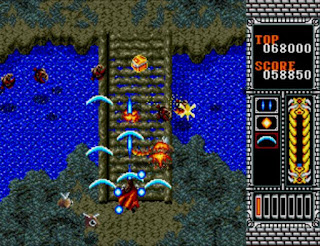 Even with these helpful magics and power-ups available though, our heroic saviour, Laden, still has to vanquish all these evil creatures by himself. Not only that but he has to do it on foot too! Consequently this game plays a little differently to tradition, aircraft-based vertical scrollers. For example, there are often obstructions such as rocks or trees which Laden must find his way around, and the varied stages themselves can play a part too. The 'fire' stage features cracks in the ground coursing with flames and volcanic chasms which fling molten rocks at you, for example, while the 'wind' stage is... well, windy, and sees Laden getting blown around. The 'earth' level even features spikes which thrust out of the ground at you! Couple all this with the large, powerful bosses at the climax of each fairly short stage, not to mention the fact that you get just the one life, and you've got a pretty testing game! 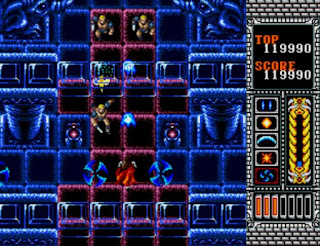 Techno Soft's output may be a bit limited (in the West, at least) but if there's one thing you can usually rely on them for, it's a high-quality game! Therefore it comes as no surprise to find that, aesthetically, Elemental Master is among the company's finest 16-bit works. The graphics on show here really are quite something - the sprites and backgrounds are beautifully drawn with some moody, atmospheric colours chosen, and each stage is both distinctive and well-designed. Their 'elemental' effects are also nicely done and I particularly like the trees that you can hide under! The sound also is top-notch with great sound effects and some fantastic synthrock music from top composer, Toshiharu Yamanishi, which will be instantly recognisable to the many fans of Thunder Forces 3 & 4 and Dragon's Fury. The 'on foot' nature of the game-play even makes it a fairly original shooting experience too. 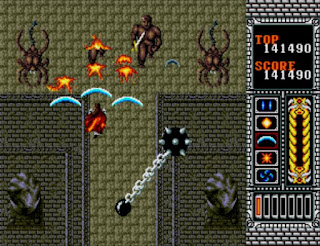 It takes a little getting used to in some ways, such as how you can get stuck behind certain parts of the scenery, and it can be a tad frustrating at times, but it quickly proves to be highly enjoyable too, particularly the interaction with scenery which isn't restricted to your own character - one stage sees enemies pushing rocks off higher ledges down onto you, for example. The weapons and power-ups here aren't the flashiest in Techo Soft's back-catalogue but they look nice and are effective enough. Indeed, everything the game has to offer is coated in several layers of the usual polish applied by this outstanding developer - graphics and sound really are exceptional, gameplay is varied and interesting, and the difficulty is nicely graded. Considering this is one of the MD's lesser known shmups, especially in Europe where it didn't get a release (it only got released in the US belatedly), there's also a good chance a lot of you haven't played it yet. I urge you to do so.

Gameplay Video: here's a video of the whole game being played by one of the talented fellows at World of Longplays (check out their great channel here). Oh, and also... **Spoiler Alert!**