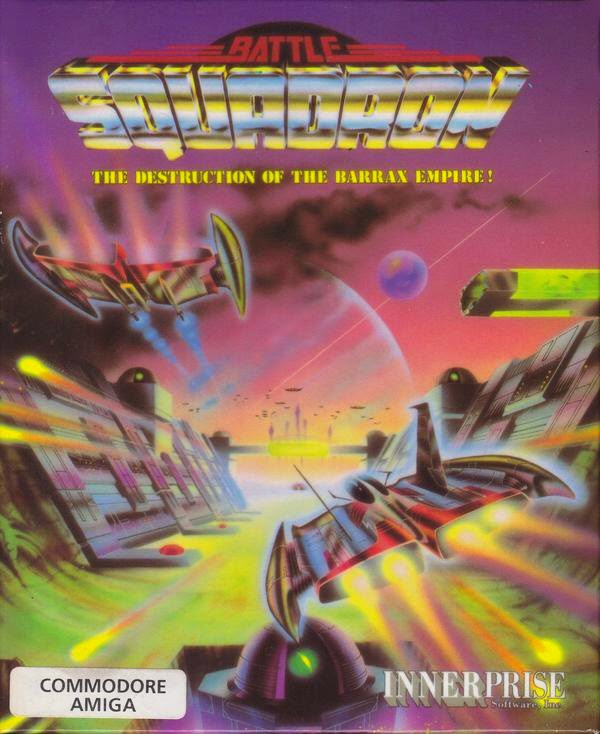 My Sega fanboy-ness was never stronger (or more irrational, some might say) than in the MegaDrive/Amiga days and one game I often used to cite as a demonstration of the superiority of Sega's mighty machine was Battle Squadron. My review of the MD version a few years back was surprisingly impartial but the fact is I've always viewed it as the better version. My opinion has naturally been contested by various Amiga fanboys over the years but I have always remained resolute. Nonetheless, I recently decided to give their beloved version of the game another try anyway!

There is actually one immediately noticeable thing about that the Amiga version that is superior to the MD, and that's its box-art. That's (possibly) a subject for another post though. As far as the actual game is concerned, there are less dramatic differences. For all intents and purposes, they are both versions of the same game which, in case you haven't played it or seen the MD review, is a one or two-player vertical scroller which charges you with violently disassembling the evil Barrax Empire.

There are several interesting things about Battle Squadron which, as far as I know, haven't been copied by many (if any) other developers. For example, there is no stage structure here, strictly speaking. The game takes place entirely on and in the same planet and there are several sections, some above ground, other underground. You start off over the former and after a while you'll reach an entrance to the first underground section, but you don't have to enter to start with. 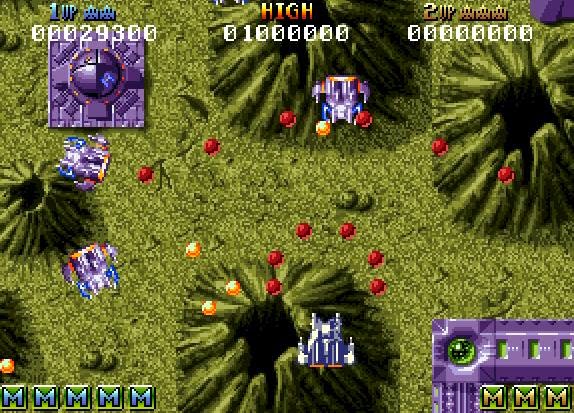 If you choose to carry on, several more entrances will appear later on, but you will need to venture forth eventually as the bosses are all subterranean. Even they don't signal the end of one stage and start of another, though, as the game will just carry straight on afterwards. All sections also feature a mixture of airborne and ground-based enemies, including some 'chameleon' ships which are almost invisible, and they are all taken out with one of four collectible weapons - orange (forward and diagonal shots - the default), green (powerful forward shot), red (wide spread shot - see screenshot above), or blue (forward and rear shots).

All this stuff is pretty much identical on either system. The only real differences are audio/visual ones, and after the box-art the next thing I noticed was the music. This version features a nice loading tune not present on the MD (you know, since it loads instantly and all) but the in-game audio isn't nearly as good. The same tune plays throughout both versions but the MD incarnation (remixed by Rob Hubbard) is louder and notably better, and the sound effects are considerably superior on the MD. 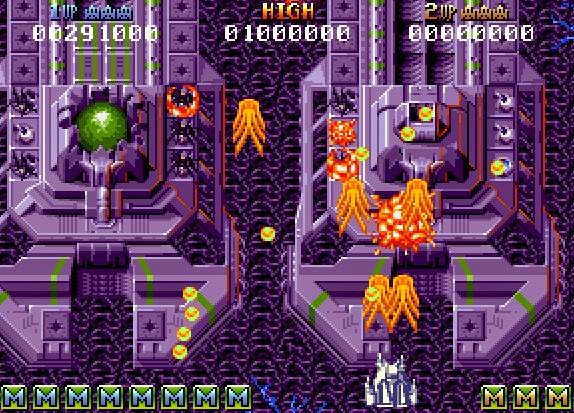 Graphically, both games are quite close but there are a few differences. One I thing I remembered from my previous times with this version is the absence of the lovely parallax scrolling found on the MD's underground sections, but something I somehow missed last time is the screen-wide flashes when the gun-emplacements explode. This is just a minor effect, of course, but I really like it, and for some reason it's only found in the Amiga version. There are also some differences in the weapon effects, especially the 'Orange Magma Wave' which covers a wider area on the MD but looks cooler here on the Amiga. Lastly, unleashing a 'Nova Bomb' here is much more of a pain as you have to rotate the joystick - not ideal in the heat of battle (which is why I still have so many of them in the screen above)!

These are all minor differences though, and if I'm being the honest and impartial blogger I should be, I'll acknowledge that both versions are fantastic and should be in the collection of each systems' respective owners. It's a great looking game, it sounds nice, plays superbly, and is different enough to most other vertical-scrollers to be well worth investing some time in. I'll still return to the MD version more often than this Amiga version but, aside from habit, that's almost exclusively because of the superior audio and ease of using bombs. Otherwise, it's too close to call...