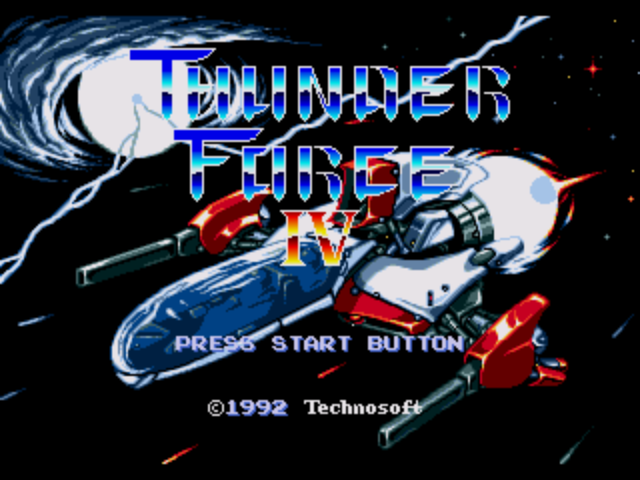 Jeepers, has it really been two and a half years since I last visited this fine series?! I guess that could be because the wonderful third game has for so long been not only my favourite game in the series but my favourite shmup overall as well. Back in the early 90's I owned all three MD Thunder Force games and duly purchased the fifth game for the mighty Saturn when it was released too, but the second and third games, particularly the latter, have always been the ones I have returned to - for some reason I never really 'felt' the subsequent releases regardless of the acclaim they continued to receive. This fourth game, known as Lightning Force in the US for some bizarre reason, is often cited by fans as the pinnacle of the series, for example, so I guess it's finally time for me to devote the time and effort to it that it clearly deserves. Can it possibly be better than the third game?

The story picks up where the last game left off, with the remnants of the ORN Empire joining forces with some allies and collectively calling themselves the 'Vios'. The Galaxy Federation quickly locates their base on a planet called 'Aceria' but they are soon defeated. Instead of trying the same approach again, they develop another new fighter craft called the Fire Leo-04 Rynex. Despite the fancy new name and lick of paint, however, it's more of less the same as its predecessor. It's fairly small and nimble, has adjustable speed settings, and can carry a couple of handy gadgets and up to five weapons. As before, when you lose a life you'll only lose the weapon you were using at the time. After taking command of this catchily-named vessel, you'll have ten challenging stages to battle through (two more than the previous game) before the forces of ORN are once again vanquished.

You can again tackle the first four stages (Strite, Ruin, Air Raid, and Daser) in any order you like, but regardless of which order you put them in, you'll quickly notice the differences between this game and the last. For one thing, many parts of the stages are taller than the screen - over two times higher, in fact, which means perfectionist players will now find it much more difficult to take out every enemy and collect every power-up. The next difference you will probably notice, certainly if you're a seasoned TFIII player like me, is that TFIV is quite a bit more difficult. This is partly due to the now-larger size of the stages as there are more places for enemies to appear from, but many of them now take quite a bit more punishment as well, especially the bosses. As before, there are mid-bosses as well as end-bosses, but they take a lot of blasting to see off. A powered-up ship could destroy a boss within ten seconds before but not any more!

That said, it's no longer as easy to get powered-up either as the weapons and gadgets are not as common as once they were. Some of the previous items return here, such as the ultra-awesome Claw (orbital drones), Shield (good for three hits), and the One-Up, and a couple of the weapons are back too - the rear firing Lancer (now called Railgun) and the good old homing blobs known as Hunter. The others are new - Blade (the upgrade for the default twin shot), Free Way (five-way missiles that fire in the opposite of the direction you press), and Snake (fires explosive grenades above and below your ship). Splendidly, TFIV also now includes an upgrade for the Claw and it's probably the best weapon in the whole game. It even has a great name - Thunder Sword - and is a charge weapon. It gains power during lapses in weapons fire, as denoted by the crackling Claws, and when ready it unleashes a high-powered forward/diagonal blast.

This handy device is available once the first five stages have been 'cleansed' and it certainly makes the going a little easier, but this is still a much tougher game than the last one was. Actually, now that I think about it, the first game and TFII were both really tough too, so I guess it's TFIII that's the odd one out. Hmm, anyway, a shmup being tough is nothing new and it's definitely easy to see why this game is often cited as the MD's premier example. As before, it's the graphics that many people will be most impressed by which are superb. The sprites are as numerous and detailed as ever and most of their designs are great - many feature nice animations such as opening up to release their payload before scooting off and the bosses are even better. They're probably no bigger than normal on average, but as well as taking much more punishment they move around much more and most take more than one form as well.

The explosions and weapon effects are nice too, especially 'Blade' as far as the latter is concerned. As with III though, the most striking aspect of the visuals is the stages themselves. They're not all that great - the R-Type style battleship stage returns but is a rather weak effort and I'm not keen on the fifth stage but all the rest are really quite superb. The mountainous first stage is a vivid introduction to the game and other examples such as the dusty desert and ruined city stages are great too, but I think it's the more 'alien' ones that impress the most (such as 'Air Raid'). Well, other than the fiery underground cavern of course, which sees a return of the famous wibbly fire effect made so famous by the third game (well, a 'lava pool' variation on the theme anyway) but also features some ultra-annoying enemies that latch onto your ship and block your fire. Grrr!

The audio is of a similarly stonking quality. The effects are the same as before for the most part (which is great) but the new synth-rock soundtrack is most welcome and is well suited to the busier gameplay this time around. That's actually what I most took away from my time with this game - the awesome graphics, sound, and stages were all expected and didn't disappoint in the least - it was the more involving nature of the play that is the biggest change in the series. Thunder Force games rarely allow you to just cruise through them but here you're constantly on the move, switching weapons every few seconds, diving through small gaps or avoiding laser spreads. Did I prefer it to TFIII though? Well, technically, TFIV is the superior game, I don't think many would deny that. It's larger and presents a bigger challenge too, but I think I still prefer the third game. It's very very close though, and I can certainly see why so many gamers sing this title's praises. It's unquestionably a fantastic shmup and definitely among the MD's best.