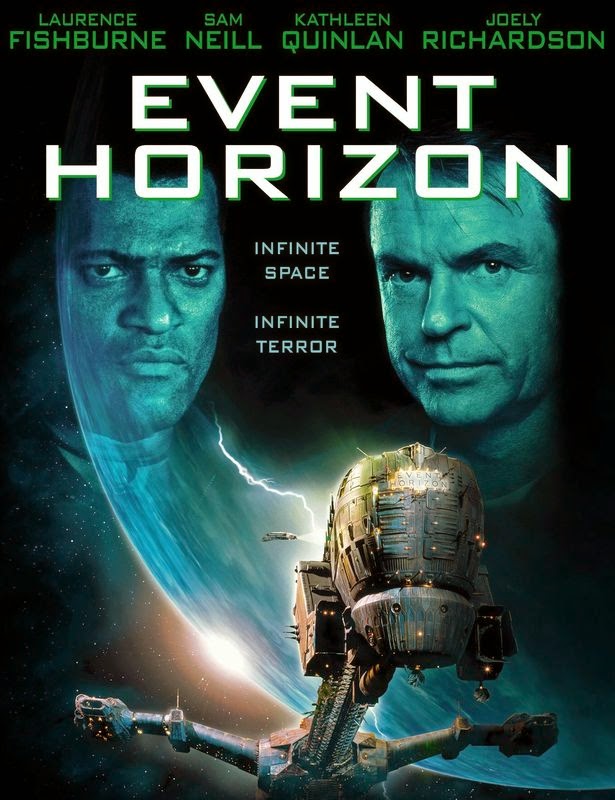 I've been a fan of science fiction for most of my life, certainly since I can remember, so it's very odd that I never got around to watching Event Horizon before now. It wasn't especially well-received in its day, nor was it very successful, but, like my viewing of martial arts films, a lack of critical acclaim never usually stops me from giving the latest example the once over. Thanks to the ever-helpful Netflix recently reminding me of its existence, however, I've finally done just that. I never knew that much about its plot other than there being a spacecraft and some sort of horror element to it, so I naturally assumed I was in store for some sort of Alien-like mystery/massacre, and that theory seemed a sound one when I started watching.

After a quick update on our recent progress in space-exploration up to the year the film is set - 2047 - it transpires that the Event Horizon is a starship that was sent out as far as Neptune's orbit to test its new experimental 'gravity drive' which should, in theory, allow it to travel immense distances in the blink of an eye. The plan was for it to nip over to Proxima Centauri, have a quick look around, and then scoot straight back. Unfortunately, it was never heard from again. UNTIL!!!... seven years later, its weak distress signal is detected coming from Neptune. So, a rescue mission is hastily assembled headed by Captain Miller (Fishburne) and his six-strong crew who head out in their much smaller vessel, the Lewis and Clark, accompanied by Dr. William Weir (Neill), the physicist who designed the scary-sounding 'space-folding' drive in question.

And sure enough, after a period of stasis, they arrive at Neptune and, after a dramatic flight through the blue planet's upper cloud decks, they quickly find the Event Horizon in a decaying orbit. Unsurprisingly, this is where I was getting strong Alien vibes from - space flight in statis, crew waking up and having breakfast together and stuff, have a mission briefing, and of course, venturing forth into dark, spooky, deserted corridors. After a short while of this, though, I realised that the Alien influence was becoming more strained as the plot took a turn in another rather more unexpected direction. Soon, the crew become trapped on the Event Horizon where they find what might be bloody remains, and being there seems to be making them see and hear things. Could something else be there with them or is being along on an old ghost ship playing tricks on them?

I expect you can guess the answer to that (if you haven't already seen the film, of course), and at first I was very much enjoying the build up to finding out just what had happened to the Event Horizon and her hapless crew. The tension is palpable and sense of foreboding strong - whenever someone enters a room or even just turns around you expect a shock of some sort, and Anderson's direction during these scenes is top-notch. For me, though, it turned out to be a film of two halves. The first, as mentioned, definitely has an Alien-ish air about it but the second is far more reminiscent of something like Hellraiser. That might not sound like such a bad thing - perhaps it even sounds awesome - but gore/torture/mutilation/etc just for the sake of it is something that really doesn't appeal to me, regardless of how well-done it may be.

A lot of movie fans love that stuff though, and for them the second half of the film may well be a treat, but as freakish as it may sound, I prefer some kind of explanation or at least vaguely plausible reason for such unpleasantness, and that was not particularly forthcoming here. The ship and its demented 'engine' give much potential for one too, which just made it all the more frustrating that everything that happens on board just kind of... happens. Fishburne was a good choice as lead though it all though, and Neill makes a convincing scientist type but the only other notable performance was Jones as the rather lively 'Rescue Technician', Cooper - the rest of them are pretty much interchangeable. It's certainly not a terrible film, and I particularly liked the first half, but after finally, belatedly watching it, I can't help feeling disappointment.