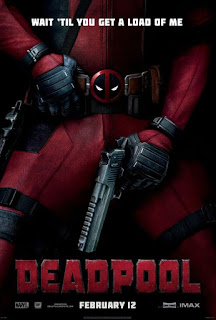 Ever since this recent deluge of superhero films began, most of them have been heavily hyped and eagerly anticipated by fans regardless of which characters were involved, but I don't think this has ever been more the case than it was with Deadpool. I of course knew little about him prior to the hype assault; I'd barely even heard the name before in fact, but it quickly became apparent that he is beloved by his many fans. This is most likely because he's a superhero for 'grown ups' in that he is more of an antihero who makes copious use of profanity, sexual references, and employs extreme violence, usually by way of swords and a variety of firearms, while going about his vigilante-related duties, many of which are carried out in an unusually jovial fashion and injected with lashings of adult humour as well. 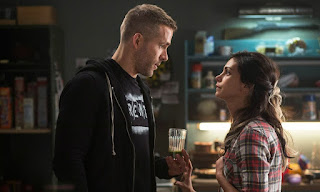 I suppose the more mature themes that accompany the adventures of Deadpool make his fans feel more justified in their passionate pursuit of their hobby. Plus, bad language and excessive violence are never anything less than 'cool', right? Whatever the reason, I'm not sure I've ever seen a group of fans as excited as that which accompanied the build up and release of this particular Marvel (though not MCU) film. I think many felt they were owed a decent Deadpool film too, after the lacklustre appearance the character made in Wolverine's much-maligned debut solo film. The excitement levels went through the roof while I observed with interest, and they were sustained upon the film's release. But what would I make of the film, and indeed the character himself, given how little experience I had with him? 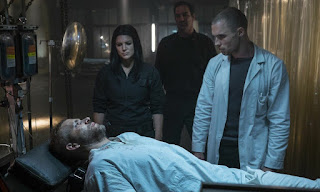 Well, first impressions were great. The exceptional production values are immediately noticeable during a creative and amusing opening credit sequence, then a chaotic action scene shown in super-slow motion featuring 'Pool taking out various hoodlums inside a rolling SUV. We're then taken back a bit, however, to meet a pre-costumed Wade Wilson (Reynolds), a former Special Forces operative turned low-level crim who, after a whirlwind romance with Vanessa (Baccarin), is stricken with terminal cancer. With nothing else to lose, he decides to take up an offer from a shady oaf who promises him a cure. After a great deal of suffering at the hands of Ajax (Skrein), the procedure turns out to have been successful - not only is Wilson's cancer gone but he now possesses various new abilities as well, including increased strength and Wolverine-style regenerative healing. 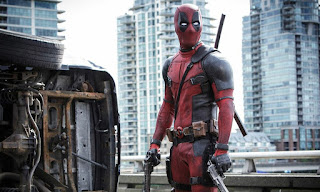 With one drawback, however: his skin is now horribly disfigured leaving him unable to return to his former life and therefore rather angry. The solution? Go after the sadistic rapscallion who performed his 'treatment' in search of a cure. Naturally, he has plenty of cronies for the newly-christened Deadpool to test out his new abilities (and marksmanship) on too, leaving us to enjoy an hour or so of humour-filled violent retribution. Owing to the film's much-lauded 'R' rating, Wade's 'roaring rampage of revenge' is fairly gratuitous and shown in much graphic detail, although he is soon joined by X-Men, Colossus (Kapičić) and Negasonic Teenage Warhead (Hildebrand), whose presence is more an attempt to curb his enthusiastically-distributed justice than it is to actually provide assistance. 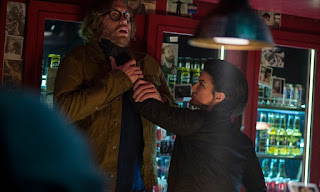 Not that he really needs it anyway I guess - he is rather handy with his fists and feet as well as his assorted weaponry after all! That's about all Deadpool is too - brief origin story told via flashback followed by violent, corpse-strewn pursuit of identikit bad guy. The latter point is a weakness of the film if you ask me. Ed Skrein plays his part well enough (he's even English) but there is nothing particularly memorable about him. He would even be a bit generic in a normal action film, never mind a superhero film which usually feature much more colourful, maniacal foes. Ajax is there purely to facilitate Wilson's revenge, not to present much of a challenge or - god forbid - outshine him. Nor is there much reason for us viewers to hate him - the only dastardly acts we've been privy to are a little torture. It's not like he killed a bunch of poor innocent kiddies or anything. 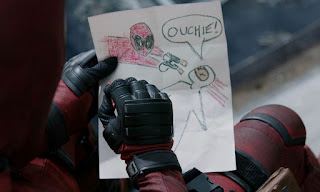 It's the same story with the other characters. Colossus and his young Negasonic apprentice are just there to make up the numbers really. The former has a few jokes while the latter gets to use her explosive powers a bit (even if she does look like she's trying to force out a giant poop when she does so) but it wouldn't really make any difference if they weren't in the film. Same goes for Gina Carano as Angel Dust, Ajax's right hand. She's formidable as usual but she doesn't get much to do. Reynolds, on the other hand, is a different story. It's a part he wanted to put it mildly, and apparently with good reason as he is absolutely superb. You might say it's the part he was made for, much like RDJ with Iron Man. His mannerisms are perfect; he takes nothing seriously and the many resultant jokes, including the much-publicised 'breaking the fourth wall' tomfoolery, are all nicely timed. 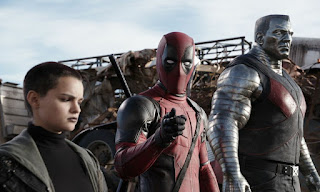 It's a film that certainly has a lot of style and attitude and plenty of dark humour and all that stuff - in abundance in fact - but there isn't really much more to it than that. It exists purely to show us all who Deadpool is and how funny (and violent) he is, not to progress any other characters and certainly not to tell any kind of story beyond his inception. I suppose you could say that about a lot of other films too, it just seems very very obvious here. Don't get me wrong, I definitely enjoyed it - I usually do enjoy revenge films, and it's a very funny one - but it's not as stunningly amazing as the ramblings of the many fanboys had led me to believe (and there are suddenly a lot of them). It's just a fun but largely inconsequential superhero film.