Retro News - The Console That Never Was!

As I have no doubt mentioned here more than once previously, my favourite period in gaming is definitely the mid-80's to the mid-90's (roughly), with the odd exception. I have many wonderful memories of this era and most of my favourite games and systems (including, or some might say especially, the arcades) come from it, and it's also where much of my focus goes when planning features for this very blog. 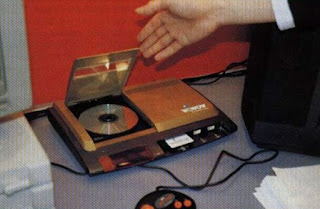 One of the most prolific developers at this time, in arcades as well as on home systems, was Taito who had been one of my favourites ever since my parents had bought me the awesome Taito Coin-Op Hits compilation for my Speccy. In fact, I'd even say they were second only to the mighty Sega in my affections in those days; their generally spiffing titles were nearly always worthy of attention, and I remember thinking on more than one occasion about how cool it would be if they had their own home console. It might not sound terribly realistic for a mere software developer to have their own home system but that's exactly what Sega had done with the Master System, as had SNK with their monstrous NeoGeo 'Advanced Entertainment System'. I still never thought it might actually happen though, so it came as a great surprise to discover not too long ago that they very nearly did have one!

It was first seen at the Tokyo Toy Show in 1992 and was (or would've been) known as the Taito Wowow - a pretty cool name I'm sure you'll agree, but it wasn't just some random catchy moniker conjured up by Taito. It was actually the name of a satellite TV station in Japan with whom Taito were working in a joint venture. 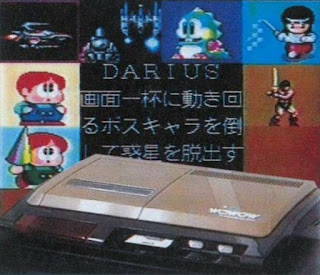 As you might've already noticed, the Wowow was equipped with a CD-ROM which would've made it one of the first such equipped home consoles, but it also worked as a satellite receiver and would've streamed games via a satellite uplink too. Initially at least, these would've been Taito's own games. No surprise there, but thanks to some impressive innards the games would be close to their arcade parents in terms of audio/visual splendour, and you wouldn't even need to buy them either as players would only be charged for the time spent playing. Actually, that might end up being rather expensive for some players, especially with their favourite titles; lord only knows how much I would end up spending on Bubble Bobble and Rainbow Islands! It still sounds like a pretty neat idea though - simply owning a Taito console would be the ultimate awesomeness all by itself, but getting to play arcade perfect versions of their games at home too?

Well that... that would've been just wondrous. Sadly, of course, no one actually had that opportunity in real life until the advent of emulation (and purists would even dismiss that), for soon after reaching the prototype stage, work on the Wowow was abandoned. This was most likely down to several factors but the two main ones, namely cost and system performance, were indeed critical issues. 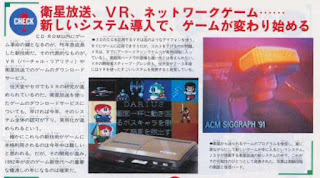 In those days, CD-ROM technology was still quite pricey for one thing, but add said tech to what must've been a fairly powerful console also incorporating satellite receiver hardware, and the cost clearly got beyond that which a company like Taito was prepared to spend. The system performance issue was potentially even more damaging though. This didn't relate to the system's graphical grunt but rather to its data transfer speed. According to Taito's Yukiharu Sambe who was in charge of the project, it took the Wowow "several minutes to download one small game". This game was most likely Darius as it was apparently the only game ported to the system, but whichever game he might've been talking about, he wasn't happy with the speed and the plug was pulled.

I suppose it makes sense though - the Wowow would've been entering a crowded market full of notoriously demanding gamers. I know I wouldn't have been the only one sad to see such a legendary developer go down, which they may well have if the system wasn't a success, so their decision is certainly understandable. How great would it have been though? I for one can't help wondering what it might've been like to have a Taito console sitting next to my MegaDrive and PC Engine...