Monster Boy and the Cursed Kingdom by FDG Entertainment (2018) 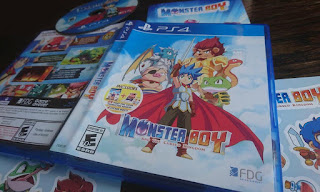 Finally (tootle tootle)! It seems like I've been waiting forever for this one. I've posted about it twice before - once in 2015 and again in 2016 - but it was starting to seem like that release date would get pushed back forever, unto the end of days... !BUT THEN!... Lo, did I wander unto Amazon's US website and there it lay, the PS4 version, glistening like a mythical treasure amidst their more expected wares, bearing a release date of December 2018 and available for pre-order! This news was met with considerable excitement but, after a quick detour, I found there was sadly no corresponding listing on the UK site. Harumph! A hastily-undertaken investigation subsequently revealed, however, that the game was indeed finished and ready to be released as a download for both PS4 and Switch, with a tantalising physical release apparently bestowed only upon American owners of those consoles. 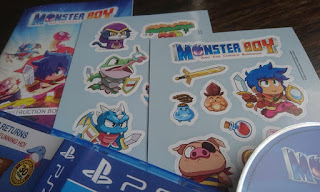 That never stopped us determined oafs in the PC Engine days though, so I deigned to source an import copy. This proved problematic on two fronts: firstly, copies were apparently quite limited; secondly, it was rather pricey - some fifty nicker. In other words, the same amount as the latest multi-million-pound triple A releases - eek! Even the download version is a rather startling £35. Perhaps it's not too much considering the 5-odd year investment the small development team has given it but it's still more than most indie titles. For that sort of price, it would have to be a bountiful treasure, filled with true wonder and brilliance the likes of which we haven't seen since... well, since the days of the games it is based on. Happily, after spending a short time with it, that seems to be exactly what we're getting. 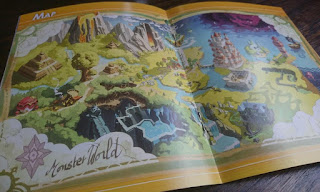 For that lofty price tag you don't just get the game disc lonely in an empty box though; Perhaps in tribute to the aforementioned days of yore, you get a beautifully-illustrated instruction book as well as two sheets of stickers featuring characters from the game. This, in case you didn't realise, is pretty awesome! When I started playing the game it was quickly apparent that this isn't just window dressing either - so far the game looks fantastic. The game world seems vast and it's filled with lots of new content as well as nods to WBIII. The PC/Steam version isn't out until next year for some reason but, based on my first impressions, anyone with a PS4 or Switch would do well to check this out immediately. If you're unsure, check out my full review which will be here as soon as I've had the chance to play through the game properly - something I'm looking forward to immensely. Be seeing you!

Feast your eyes and ears upon this awesome trailer and then wonder why you haven't bought it! :)