Okay, this particular new arrival may not be remotely retro-related but it does have at least some gaming relevance! Before we look into that, however, let us first pause for a moment to remember my trusty red HP Pavilion which has been retired after about five years of faithful service. Not many of you knew it in person but if you've visited my humble page before, there's a good chance anything you saw or read therein was played, captured, written, and edited on my glorious red laptop.

It was a bit of a pain now and then - it was even running Windows 8 - but overall, it was a mighty fine machine and served me very well. The decision to replace it was made for a few reasons. Getting new stuff is always cool anyway, but it was mainly because of performance issues - it had been getting slower and slower (most likely due to its age, I suspect) and I've been growing impatient for an SSD-based OS, so I just figured it was time for an upgrade. And if you're going to buy something like a computer, you might as well make it a stonking great one! 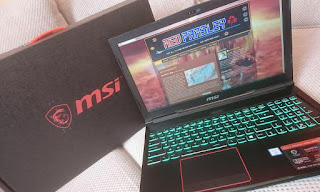 I've had my eye on MSI's laptops for quite a while now so they were the first manufacturer I looked at on this occasion as well. The 'main' one last time I looked was the MSI Apache Pro but this time I mainly saw the MSI Raider in a number of configurations, so it was one of those I went for, specifically an MSI Raider RGB GE63. It came with an i7 8780H processor, 16GB RAM, a 1TB HD in addition to that much-coveted 128GB SSD, and a GeForce GTX 1060 6GB graphics card. This is probably all rather normal, possibly even weedy, to some of you (people like my good friend Luke, for example, whose desktop has a twelve-core processor and 64GB RAM or something ridiculous like that!), but to me this is a laptop of monstrous power.

The difference from having an SSD-based OS is quite remarkable. I had actually been getting quite obsessive in monitoring the CPU and HD usage on my red laptop due to a previous drive failure. My friend and Team Flicky colleague Dave actually rustled up a little desktop tool to help me keep on eye on things, and every time the CPU or HD usage shot up, I would be straight onto Task Manager to see what was causing it, and in most cases to 'end task' it as well (usually unnecessary Windows nonsense). 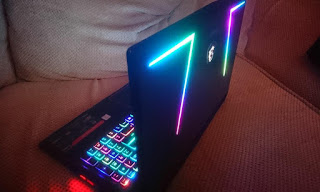 Now I don't have to care about any of that - Windows can run all the stupid processes it wants, it doesn't matter now - hooray! Of course, even with big advantages like that, it would still be a bit of a waste to have a laptop like this and not play games on it, so I suppose I am now almost obligated to play, at least try some of those stupid modern games that take a week and about nine billion terabytes of drive space to get up and running. Bah! Never mind, I guess I took on that burden when I bought the system (chortle!). In all seriousness though, it will certainly be nice to have the option now, but I mainly bought it simply to have a fast, powerful machine that wasn't pissing me off every five minutes. The fact that it has loads of glowy and/or flashy lights all over it is a nice bonus for easily-pleased simpletons like me too - you can even change the colour of each individual key!

So what do you guys think? This was possibly my chance to rise above the height of all my fathers since the days of Elendil. Did I make as splendid a purchase as I'd like to think I did, or do I have more money than sense? I hope the former - considering how little money I have, that wouldn't leave much sense at all (chuckle!).