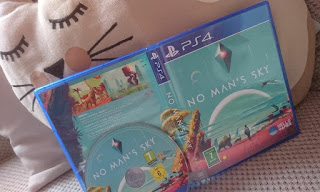 Despite having posted about most of my recent PS4 acquisitions, I'm still rather behind on posting about the earlier ones, so I thought I'd go right back to the beginning with this one. As long time readers may know, I was ultra-excited about No Man's Sky - the promo blurb and screenshots made it seem like a game that would appeal to me enormously, but as it turned out, it failed completely to live up to its promises. I still wanted to try it anyway but at the time of its release I didn't have a PS4 and my PC apparently wasn't capable of running that version, so I missed out. Upon unexpectedly getting a PS4, however, it was one of the first titles to pop into my head. Supposedly it was superior to the PC version anway, and after buying Driveclub with my new console, the next purchase I made was this one. 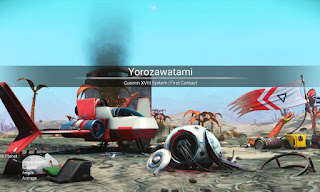 Due to its stinky reputation at the time, it didn't cost me much (only ten sheets, in fact). I was keen to get going too, so I wasted little time when I got home, only to find myself stuck on some planet with a busted ship! Research later revealed that many others found this 'intro' somewhat irksome too, mainly because it takes ages to actually get into space and do some exploring. Walkthroughs on YouTube reveal that it takes about half an hour of pissing about to get there, and that's presumably if you know exactly where to go and what to do. Accordingly, I'm ashamed to say my impatience got the better of me and I gave up, never to return (well, not yet anyway). I have heard that Hello Games have given their adventure a ton of updates though, turning it from a stinker into a corker in the process. Should I try once again to force myself through the annoying opening?