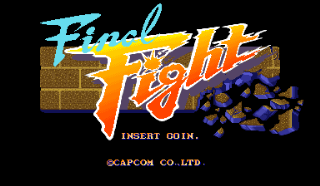 In recent years, Capcom have probably been most famous for their Resident Evil games. Through most of 90's it was the Street Fighter series, but before all of the many, many incarnations of these games, one of their most popular games was a scrolling fighting game which was so revered that it pretty much single-handedly formed the basis for Sega's decision to create the Streets of Rage (Bare Knuckle) series! This game was of course Final Fight and it's a game that I'm ashamed to say I had never played properly until a recent visit by my good friend Luke. In my defence, I was a Sega fanboy during the years in question but it's still no excuse really. To make amends, an hour or so of two-player ass-whooping ensued with the following discoveries.

Apparently the game is set during the same period as the original Street Fighter tournament and is based in Metro City where ex-wrestler, Mike Haggar, has recently become mayor. The leading gang in the city, Mad Gear, decide to send a message to Haggar by kidnapping his daughter, Jessica. This of course doesn't have the desired effect and instead sees Haggar set out to bring down the heinous gang along with Jessica's boyfriend, Cody, and his sparring partner, Guy. However you try to tart it up, it's a pretty weak story which had been heard numerous times before and would be heard many more times in the future. It's enough to get you playing though, but first you must choose which of the three protagonists you want to play as!

I already had a feeling that Luke would choose to fight as the mighty Haggar himself due to his immensely powerful wrestling moves so that left me to choose between the two martial artists - the quick and agile Guy or the jack-of-all-trades Cody. I went for the former and we got stuck straight into the action! The start of the game sees our heroes and some Mad Gear gang members, Jessica in tow, separated by some steel drums. This stand-off doesn't last long though as the suddenly Jessica-less goons set upon the mayor and his associate for the start of six fairly long rounds which are set all over the fictional city from the slums and the west side, through subways, parks, and bars, to industrial facilities and the bay area.

Mad Gear initially seems to be a mere street gang whose numbers are made up of punks, thugs, and crack-hoes of various descriptions, but as you get further into the game, as well as getting more numerous, you'll find a few who are a bit more professional and militaristic. Wherever in the game the enemies appear though, most of them merely attack with punches, kicks, and throws but there are a few who use knives or even firebombs! Our three heroes all have their own unique set of moves, of course, which include a multitude of punches and kicks as well as throws, multi-hit combos and special attacks. There's also a good helping of weapons such as knives, pipes, and swords they can use which can frequently be found laying around or, perhaps more commonly, in the wreckage of the many objects such as phone boxes, dustbins, and billboards that can be destroyed.

There are some other items to look out for too including a variety of foods and drinks for recovering some energy as well as jewellery and gems for bonus points. Like most fighting games though, it's not a complicated affair, with the object simply being to beat the crap out of anything that moves! Each player character has some rather satisfying moves to learn, which doesn't take too long and, while I did have a quick go with Haggar and Cody, I think Guy remains my favourite. The enemy characters are pretty good too. There's around eight different types but also several different designs of each too, so there's a surprising amount of variety during the stages.

The bosses are pretty varied too. They can be found at the end of each round as always and some of these, whilst perhaps a little unusual, are mostly a real challenge. They're usually armed (although there's often weapons lying around for you to use too) and, like the standard enemies, have their own energy bars, but this time much longer! Some of them have gone on to greater fame in the Street Fighter Alpha (Zero) series such as samurai wrestler, Sodom, and pesky Red Beret special forces goon, Rolento, but the others are fairly memorable too like the porky machine-gun-wielding cop at the end of round three. One of the standard enemies even starred as a playable character in Street Fighter 3! Talking of bonus points, there's also bonus rounds at the end of the second and fourth stages which charge you with destroying first a fancy car and then a load of glass panes within a strict time limit.

I'm sure everything sounds very familiar so far, even if you haven't played the game before, but lets not forget - many of these things are so familiar because Final Fight invented them, or at least popularised them! Even I, as a loyal Streets of Rage player, am able to acknowledge that. My experience with Sega's series has perhaps dulled the impact Final Fight has had on me but it's still clear to see what a fantastic game it was, and still is. It still looks really nice for one thing. The backgrounds are mostly very urban or industrial with great attention to detail (like graffiti and posters all over the place, for example). My favourite stage is probably the one that takes place on a subway train, although I'm not sure how barrels ended up on it!

The big and distinctive sprites found here have long been popular too. They're animated quite well and as mentioned there's a few different 'skins' for each type of enemy as well. Some of them have some rather creative moves, especially the crack hoes, Roxy and Poison (who were censored in some Western versions) who flip and leap all over the place, and there's a few nice special effects that would reappear in later Capcom fighting games such as someone getting engulfed in flames - eeek! One area of the game that disappointed a little, though, was the audio. The music and sound effects are pretty good but after being spoilt by Streets of Rage (especially the second game), they seem a little bit anonymous. Still, I'm sure they would've been fantastic if I hadn't played Sega's game first!

There's no doubting the quality of the game though. Nearly everyone except for Sega owners got to play a home version of it, hence Streets of Rage, but playing it for the first time after all these years reveals a fairly simple but very well-made game that hasn't aged at all. The stages themselves are fairly generic, much like the ones in Sega's game, but the actual fighting seldom gets either boring or overwhelming. It is very satisfying though - each character has their own strengths of course but all are enjoyable to use (although it's hard to beat Haggar's piledriver and suplex moves!). It's just a shame the series quickly went downhill - I guess Capcom were concentrating elsewhere by then - but this first entry in the still-respected series is a frickin' awesome one!