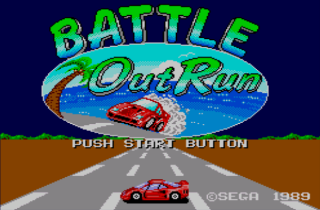 I'm not sure why but I'm in a bit of an OutRun mood at the moment. It could just be because OutRun rules more than anything else ever, but is that true of every game that carried the famous name? I took a look at the best games in the series with the recent Top Five OutRun Games, but you may have noticed that Battle OutRun isn't there. In fact, there's a good chance that many of the world's gamers won't even have played it as it was apparently only released in Europe. Seems a bit strange to me - surely if any game in the series should only be released in Europe, the logical choice would be OutRun Europa? Perhaps it's because the rest of the world didn't want it. After all, OutRun hardly has a glowing track-record on home systems... 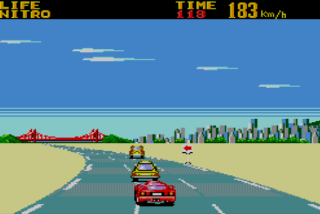 The first thing you may notice about this game is that it uses a Ferrari F40 as the player's car, much like Turbo OutRun did which was released the same year. Aside from that, things initially look very familiar. Except for a screen prior to play which seem to indicate the existence of an enemy vehicle. Indeed, it soon transpired that a famous racing game which was heavily influenced by the original OutRun has in turn influenced this sequel to OutRun! The game in question is of course Chase HQ so, as you may have guessed, the 'Battle' part of Battle OutRun's name, as well as the game's casual reference to an enemy car, means that this is also a racing/combat game - you get 150 seconds with which to catch up with the enemy, then smash him off the road, just like Taito's game. Of which there is already a fine conversion on the Master System. 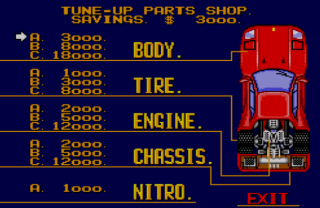 Since you're playing the game as bounty hunter, there's also some money involved. You start with $3,000 and each time you defeat a 'mobster' you'll get some more, with the amount increasing as you get further into the game. This money can be spent in the 'Parts Shop' which is actually a big truck that turns up mid-way through each stage. Here, you can buy upgrades to your body, tyres, engine, and chassis (the latter of which doesn't seem to do an awful lot), as well as outfit your car with some good old nitrous oxide! Most of the upgrades are necessary to be able to keep up with the bad guys too, one of whom occupies each of the eight stages spread across the US (and a ninth which appears upon successful completion of the rest). 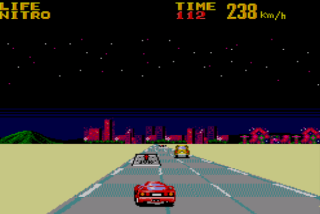 Like Chase HQ (and OutRun, I suppose!), each stage is a point-to-point race along highways filled with civilian vehicles as well as lots of (indestructible) cars driven by henchmen of that stage's 'boss' who will try to prevent you from catching him up. Each stage also features some sections with ramps although I'm not entirely sure what these are for - there's not anything to jump over and they don't really cause you any problems either. A bit more troublesome are the seemingly random oil spills and yellow boards that are usually placed around corners. Hitting either of these will cause a reduction in speed much like hitting any of the other cars, and there's also the usual roadside objects such as sign-posts that will cause even bigger problems if you veer off-road and hit them. 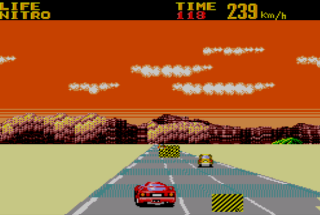 Whether you're a fan of OutRun or Chase HQ, there's nothing here that will surprise you too much. The big question must therefore be, is it better than either of them? The Master System already hosts good conversions of both games after all. Graphically it's a mixed bag. On the one hand, the cars all look pretty good and are nicely detailed and each stage has its own backdrop. On the other hand, there are few different cars, there's a lot of sprite-flicker (which made getting decent screenshots tough!), the sensation of speed isn't great, and the track-side is completely bare most of the time. While this is helpful for the lack of things to accidentally crash into, it's not very pleasing to the eye! The sound effects are pretty poor too but the music is better. There are four tunes you can choose between prior to each stage (on the car radio, of course) and they're not bad. I particularly like the second one and I'm sure any player will be able to find one they like too. 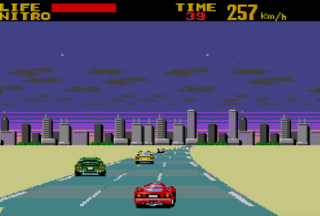 As far as playing it is concerned, the first thing I noticed is how annoying the henchmen cars are! They home-in on you as you approach them to overtake and cause a big reduction in speed if you hit them, and it's even possible to hit the same car three of four times in succession - grrr! Aside from this great source of frustration though, Battle OutRun is actually a fairly enjoyable game. There's enough stages to keep you busy for a good while and although it's a pretty tough game too, even near the start, you can play the eight stages in any order you like. As it stands though, those bloody henchmen cars do exist and they're a pain in the damn arse, so it's a hard game to recommend. OutRun fans should definitely give it a try, for the sake of completion if nothing else, but everyone else should probably try Chase HQ itself first.