There's been surprisingly few long-running series' of racing games, but of those that have been doing the rounds there's one that continues to elicit both tremendous excitement and expectation from the many fans that continue to worship the series. The name of the series is of course OutRun and continues to be one of Sega's most popular. By my count, there's now been ten games in the series but here are, in my view, the best five: 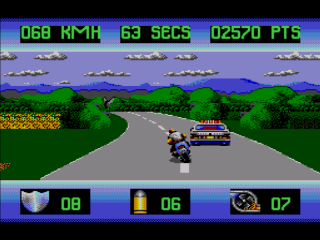 Unusually for an OutRun game, Europa was never found in an arcade and wasn't developed by Sega either. It did see release on Sega's Master System console though, as well as most of the home micros of the day, courtesy of Probe Software, and was something of a departure for the series. It charged the player with racing across Europe using a variety of vehicles, including a motorbike, jet-ski, and a powerboat, in addition to the usual sports car, to retrieve some 'secret documents' or some such nonsense. Doesn't sound much like an OutRun game I'll agree and perhaps it shouldn't have carried the name, but it is a surprisingly enjoyable and nicely varied game in its own right which even had a bit of combat thrown in for good measure! 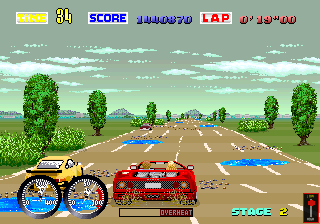 This was the first arcade release after the original and I still remember how excited I was when I first saw it sitting imposingly in whichever arcade it was (I can't remember that part!). I had to wait a quite a while before it was my turn to play but when I did it was more than worth it! It's based on the same hardware as the original but had noticeably superior graphics including lots of special effects such as a variety of weather. It also upgraded your car to a Ferrari F40 (the greatest supercar ever?), added a rival racer, gave you limited use of a turbo boost, and did away with the branching stages, replacing them with a timed, point-to-point race across the USA. Some didn't like the changes but it added more than it took away and it remains a fast and exciting game worthy of the OutRun name. 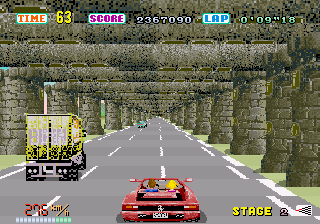 Is this the best OutRun game ever? It was certainly a revelation in its day and few games bring such warm, fuzzy feelings flooding back, for me included, but I have to ignore nostalgia for the purposes of this list and acknowledge that for all its innovations and general brilliance, the game that started it all is starting to show its age, just a little. That said, I still own two copies of it for my Saturn and won't be getting rid of either of them in a hurry. When the mood takes me, there's still nothing quite like a laid-back cruise across the varied terrain this wonderful game has to offer - no positions to race for, no annoying rivals trying to smash you off the road - just a road, a clock, your girl... and that music! 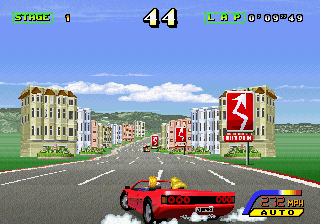 Of all the games on this list, this is the one that I'd had by far the least time with until recently. I knew it offered multi-player frolics and I knew it was pretty well-regarded, but I've never seen it 'in the flesh' so I've never really had a chance to play it, so that's about all I did know. However, upon firing it up just a few days ago, even via emulation, its quality was immediately obvious. It takes the best bits from OutRun, the best bits from Turbo OutRun, and adds a few ideas of its own such as selectable cars, each with their own unique driver and passenger, and some very creative stages (Atlantic Ocean Underwater Tunnel?). Throw in some fantastic graphics and mix it all together and the result is one of the finest non-polygon-based driving games I've ever played. 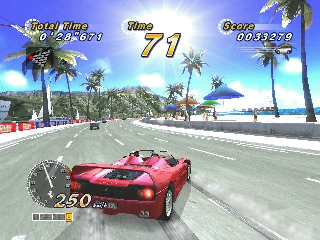 This was the game I bought my otherwise-hardly-used PS2 for. Is any console worth buying for one game? Maybe, maybe not, but either way, this flashy update/sequel to OutRun 2 is a pretty blinking awesome game! I'm not keen on the idea of having to do huuuuge drifts around practically every corner but apart from that it really is a faultless racing game. There's loads of stunning tracks, branching stages, lots of awesome Ferraris to drive, several play modes including a creative mission mode, and tons of stuff to unlock (including the original OutRun music). Best of all though, it comes closer than ever before to matching the charm and atmosphere of the original game which is all many fans wanted, including me. Sega have rarely seemed to reach their former heights in recent years but this wonderful, addictive, and long-lasting game made up for a lot of previous disappointments. One of the best arcade-style racing games ever.
Posted by RetroKingSimon at 18:05