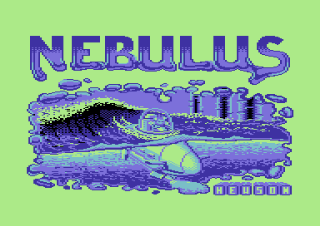 As far as gaming is concerned, when you think of fancy visual tricks you might immediately think of Mode 7 on the SNES or maybe some extravagant demo on the Amiga, but John M. Phillips achieved a pretty nice one as early as the 8-bit computers with this memorable platformer for Hewson. It's a game set in a rather watery world (so Kevin Costner might turn up unannounced) and stars a green space-hopper type creature called Pogo who gets sent by his boss to investigate and destroy a series of cylindrical towers which have sprung up almost overnight. To do this he must make his way to them in his amusing little submarine and climb to the top of each in turn, and they rotate as he walks around them! 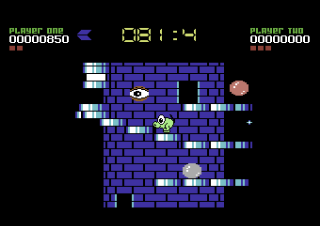 Since the object is to reach the top of the towers, each has lots of stairs, lifts, and doorways which lead through the tower to a similar doorway elsewhere, but as he climbs Pogo encounters more than a little resistance. For starters, there's a number of aliens residing on the platforms. Some of them move in simple patterns and must simply be avoided while others can be dispatched with Pogo's short-range snowballs. Far more inconvenient that these clots, however, are the flying aliens which drift across the screen every now and then. These pesky things travel in a straight line and can't be defeated so the only way to avoid them is to move further up or down the tower until they've passed. Contact with any of the enemies will knock Pogo down to the platform directly below. If he's already at the bottom when he's hit, he'll fall into the water and lose a life. 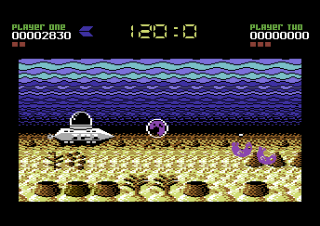 Each tower also has a pretty strict time limit which will cause Pogo to lose a life if it expires before he reaches the top. As well as the enemies, there's also groups of floor tiles which are slippery and harder to walk on and a few unstable tiles which disappear when Pogo walks on them. The latter can be the biggest problem as there's no way to distinguish them from normal tiles until... you've guessed it - you've already fallen through them, most often to your death, and that means we're in trial-and-error territory! To be fair, aside from the vanishing tiles it's not too bad in that regard but the greatest requirement for success here for much of the game is a good memory rather than platforming skills and that can make Nebulus a rather frustrating game. 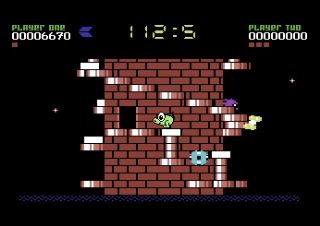 By its very nature the game gives you little space to manoeuvre so, until you've learnt each stage, poor Pogo will be tumbling down the towers often. Even more annoyingly, there are also a few points where being hit will send you all the way back down to the start, or even into the water and death. There are eight towers altogether though, and they get progressively taller and more complex, so it's at least a game that will last you a good while, and there's even a bonus round between each stage where Pogo has to scoot along in his submarine catching fish! It's quite a nice-looking game too. Most of the sprites aren't very interesting but Pogo looks quite amusing and is well animated, and the colours are appealing too with each tower a different colour. 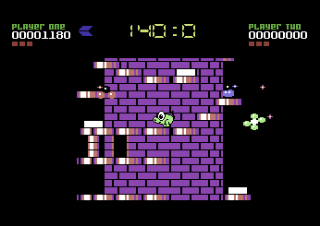 The best thing, though, is the rotation of the towers which is a superb effect and has been really well done. It does of course mean that Pogo stays in the middle of the screen at all times and the towers effectively move around him instead so it takes some getting used to - I swear it made me dizzy to start with! This alone makes Nebulus a rather unique game to play and it's definitely worth trying out. Once you get past the novelty of the twirly towers though, you may find yourself tiring of continually getting knocked down to previously beaten areas. Not many games make me want to throw my controller in anger but this one came close! Nebulus is original and can be great fun, but it can also be very frustrating!