Is this an overhead run 'n' gun game? I'm not totally sure it counts to be honest but I'm not too concerned if it isn't, it still gives me the excuse to play it! And play it I did, for the first time since my good friend Luke had his Dragon 32 all those years ago which, subsequent research indicates, did not host an official version either. So, this is my first experience with 'proper' Berzerk and it was one which I'm sure will leave a lasting impression on me. It's a game that was supposedly born in a dream of Stern employee, Alan McNeil, who imagined fighting rooms full of hostile robots. The subsequent game was released soon afterwards and malevolent automatons did indeed play a pivotal role. The object of Berzerk, you see, is simply to avoid meeting your maker at the hands of one of the pesky cycloptic metal monsters. 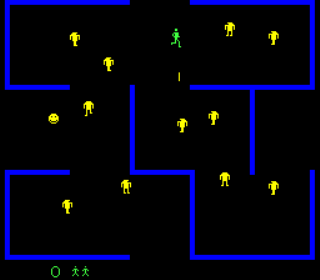 Curiously, there doesn't seem to be a title screen with the attract mode alternating between the high-score table and demonstrations of the in-game action which consists of a basic, single-screened maze populated by a green stick-figure (the 'humanoid') and numerous robots. You, as the humanoid, must simply reach one of the exits around the edge of each screen to move to the next. Destroying the robots isn't mandatory but does of course make things a bit easier as well as earning you points. They can all be destroyed by a single laser shot which Mr. Humanoid can fire in any of the eight directions he's moving in. There are, however, several dangers that can befall him. The walls of the maze are apparently electrified so contact with them will cost him a life, and contact with any of the robots or their lasers does the same who come in various colours which indicates their lasering ability. 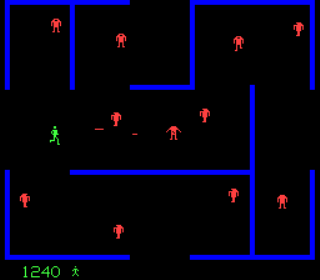 The first robots you encounter, the yellow ones, can't fire, but all subsequent colours can, and with increasing frequency and speed too! They don't generally walk very quickly but will gradually home-in on our hero, shooting as they go. Unfortunately, you can't take too long to hunt or avoid them or 'Evil Otto' will appear who's an invincible, bouncing smiley face who will head straight in your direction, and much quicker than the robots do! The amount of time it takes for him to appear depends on how many robots the maze contained at the start and both of these factors are random. There are apparently some 64,000 different mazes - each time you enter a screen it could be any of them and will also contain a random number of robots. This includes when you lose a life too - if you get killed, you'll start the screen again with a new layout and different number of enemies. 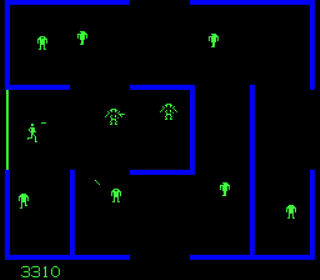 As you can see from the screenshots, the graphics here are very basic. This is of course understandable for a game that's now over thirty years old and while the sprites are barely animated at all, I do like the classic design of the robots with their rotating eyes and the way they explode when shot is pretty satisfying too! Much more famous than its looks though, is the sound. There's no music and very few effects but there is some fantastic robotic speech! There's actually quite a few phrases including the likes of "Intruder Alert!" and "Kill the Humanoid!" and the game even taunts you, calling you a 'chicken' if you leave a screen without killing all the robots. Even the attract mode entices you to play by periodically uttering the classic "Coins Detected In Pocket!" which must've been quite startling, not to mention supremely awesome to hear at the time! 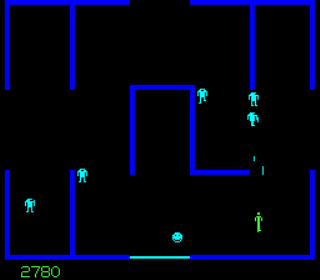 Many of the classic coin-ops from the dawn of gaming fully deserve their standing as all-time greats but are they all as playable today as they were in their day? Not always, it has to be said, and I wondered if this might be the case with Berserk, particularly as I hadn't really played it before so I didn't have any nostalgia to cloud my judgement. What I've discovered, however, is one of the most addictive games I've played! It's pretty tough going and gets much tougher but the controls and collision-detection are top-notch. I'm still not very good at it but I've enjoyed playing it immensely and every time I play I'm sure I can get a better score than I did the last time. This is not often the case as you can probably see from my 'high' score table but my belief and determination continues unwavered! Berzerk may have given rise to such legendary games as Robotron 2084 but it's still a hugely enjoyable game in its own right - just don't play it if you value your free-time!