It wasn't too long after I had the pleasure of discovering Astro Wars at my cousin's house that I first met my good friend, Luke. We met in middle school and I believe the catalyst was the mighty Star Wars. It's really hard to remember these things accurately (for me, at least) but I'm pretty sure he heard me talking about what we would soon discover was a mutually-appreciated subject and we soon became friends. The first few times we met up outside of school was of course for Star Wars-related reasons - swapping duplicate figures, primarily - but it wasn't long before I discovered he had a computer too. I only had a passing interest in them at this point but he was eager to show me his favourite games. 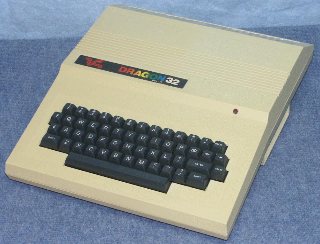 Unknown to me at the time, his Dragon 32 was an 8-bit micro and wasn't one of the most well-known or appreciated computers of the day, but where they were most popular was here in the UK. That's hardly surprising, I suppose, since they were produced by Welsh company, Dragon Data, but they were apparently also available in the US as a 'Tano' (any American readers remember them?). It was actually a reasonably powerful machine for its day but also included some rather unfortunate flaws as well which put paid to any chance it might've had of challenging the mighty ZX Spectrum and Commodore range. Luke and I never played a large range of games on the system but we both still have great memories of the ones we did play. 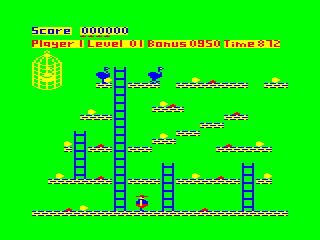 One of the best platformers of all-time? Almost certainly, and this is still my favourite version which makes it even funnier that, after all those hours Luke and I spent playing this game, I have absolutely no memory of the background being bright green, which is strange - you'd think that would be the one enduring memory! Hmmm, anyway, regardless of the rather garish colour scheme, Chuckie Egg remains a superb game. It features nine progressively harder single-screen stages where you, as Hen House Harry, must collect every egg whilst avoiding the evil Hens of Death. It sounds pretty easy in principal but some screens have a fiendish layout, and that's before the Master Goose arrives to terrorise you! This really is a superb version of this famous game, and it even allows a few little tricks that the other versions don't! 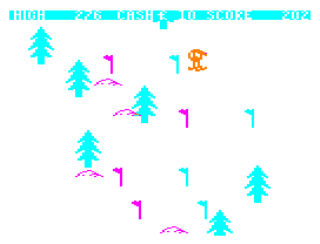 I know many have asked before me but does anyone have a clue what Horace actually is? I think he must be some sort or ogre or something. Well, whatever he is, he sure seems to like skiing. So much so, in fact, that he's willing to brave a busy road filled with fast-moving traffic, Frogger-stylee, to rent his skis. Then he has to get back across the road before he can use them! Ironically, this first part of the game is the hardest - the actual skiing part is very pleasant and relaxing after the intensity beforehand. This Dragon version probably isn't the best, as I've subsequently discovered - the graphics are blocky and the choice of colours is a bit odd - but it was pretty good fun in short bursts back then. I think Luke liked it more than I did though! 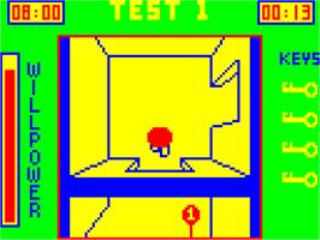 As far as I'm aware, this obscure maze game was actually a Dragon exclusive which must've been a rarity! It's a slightly odd game starring you as a ginger-haired head with legs who, as shown in the very short intro sequence, has unwillingly been trapped inside a series of overhead-viewed mazes. Contained within these 'tests' are horrifying skeletons and man-eating (or head-eating) snakes. The object is to avoid these and collect keys to assist in your escape, and before your 'willpower' meter expires! I hadn't played this game in 25-odd years before this feature, so it does understandably seem to have aged somewhat, but it's still a fairly enjoyable game, and has an impressive 3D effect as you walk through the mazes. 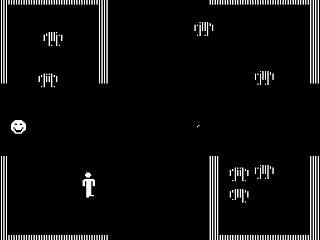 I can find precious few references to the Dragon version of this game nowadays but I do vividly recall that, unusually for an 8-bit micro, this game actually came on a cartridge meaning Luke and I didn't have to go off and find something else to do for ten minutes before we could play it! I suppose Berserk was more famous as an arcade and Atari game but this version is great fun too. It was one of the main influences behind Eugene Jarvis's Robotron 2084. Accordingly, the object is to clear each room of evil robots by shooting them with your laser. Predictably, they can also shoot you back, and if you take too long the evil, not to mention invincible, Smiley Face of Doom will stalk you! I swear I remember this game having colour graphics, but aside from that possible inaccuracy I have great memories of playing this addictive blaster.


It wasn't long after playing these great games that I became a Speccy owner and Luke upgraded to his trusty CPC and the poor old Dragon was never used again, but Luke and I still occasionally reminisce about those 'good old days' of no responsibilities and addictive games. Maybe they'll return one day...
Posted by RetroKingSimon at 18:10