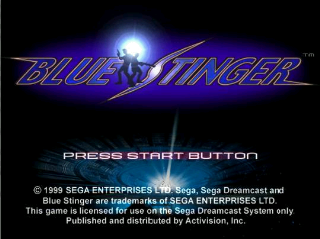 As game systems get more and more powerful over the years it's only natural that the games played on them will evolve to make better use of them too, and occasionally new genres appear. One such genre was arguably started by Alone in the Dark which appeared in 1992 for the PC but I don't think anyone would deny it was the arrival of Capcom's Resident Evil series which really saw it take off. This genre came to be known, of course, as survival horror, but it's one that's never really taken a hold of me. Despite this, I bought Blue Stinger at the Dreamcast's launch and looked forward to exploring its world. Is that because it promised something more than existing survival horror games, or would I once again fail to be ensnared by this burgeoning genre?

In all honesty it was probably just excitement over the Dreamcast's arrival which prompted the purchase of this game, but it does have a few differences to earlier games of its type. It's set in the Gulf of Mexico in the vicinity of the Yacutan Peninsula. As we're shown in the fairly decent intro sequence, this was the site of the immense meteor strike which brought to an end the age of the dinosaur. Fast forward to the year 2000 and a mysterious island is all that remains after a huge earthquake hits the presumed site of the meteor impact, and it becomes known as Dinosaur Island. It isn't long before the island is occupied by a shady biotech corporation called Kimra. Nearly twenty years later, ESER (Emergency Sea Evacuation and Rescue) member, Eliot Ballade, is fishing in the area while on vacation with a friend when something falls from the sky, heading towards the island.

Soon after the island is struck by what appears to be a meteor, an energy barrier appears around it which traps Eliot's friend, and almost capsizes their boat in the process. Needless to say, Eliot awakens on the island with only a blue, floaty creature called Nephilim for company. Urging Eliot to follow her, it's at this point your adventure begins. To begin with you'll just have Eliot to control but before long you'll meet some friendly characters - Janine King, a member of the security force on the island who most of your contact with is via computer/viewscreen, and Dogs Bower, a resident of the island. From this point on you can select either Eliot or Dogs to explore the mysterious island with. Eliot is faster and more agile, Dogs is stronger and can take more damage. But damage from what, I hear you ask? The majority of Blue Stinger is a adventure game - explore the various buildings and other areas, solve simple puzzles or find items to progress, etc, but there are also some less-than-friendly creatures on the loose.

As you might expect from a survival horror game, the island is occupied by some horrifying creatures as well. Many of these used to be human by the looks of it, but I don't think they're zombies. Whatever they are, they waste little time in tearing chunks out of Eliot and Dogs if they get the chance. To begin with, your only means of fending them off is your fists but it isn't long before you'll start finding some more effective weapons. These come in two groups. Short-range weapons include the trusty baseball bat (do these things actually get used for playing baseball?), axe, even a light-sabre type device. Far more effective (and safer), but with finite ammunition, are the long-range weapons. These include the standard handgun and shotgun, a couple of more originals ones in the acid gun and plasma gun, and the supremely satisfying bazooka!

Some of these weapons can be found surreptitiously laying around, but they can also be bought at one of the various (automated) shops you'll come across. It's the same for ammunition, although this can also be found on some of the dead bodies you'll periodically encounter. Eeek! Dinosaur Island is a fairly extensive place too. As well as the expected areas like the docks (which is where you start), warehouses, and research facilities, there's also shops, banks, and all sorts of other places. It's more like a town than a corporate headquarters - they even have their own currency - the Kimra dollar. This can be found in several places but your first source of it is a dangerous one - the terrifying monsters themselves!

Predictbly enough, the hideous creatures increase in both strength and numbers as you progress through the game but it's worth taking them on rather than running as each will explode in a shower of coins upon defeat! Whilst this does break the illusion a little, they are nonetheless invaluable sources of money which is needed to make decent progress. Money can also be found in a few other places, as can numerous other items. Some of them are useful but not very exciting such as keys, bank and ID cards, stamps, etc. Others are a bit more interesting but less useful such as an array of new t-shirts! Various foods and 'Hassy' drinks can also be found or bought which replenish your energy level to a varying degree depending on what you consume.

One of the biggest attractions of games like this is their realism which is probably why they, as a genre, were born relatively recently as a result of the ever-increasing power of home systems. After all, only so much realism could be achieved on the older and more limited cartridge and disc-based machines! Accordingly, considering it was one of the first Dreamcast games, Blue Stinger is a fantastic-looking game. The intro and cut-scenes are great (although the lip-syncing is a little ropey) and this was one of the first games on any system to feature a fully-3D game environment. The scale and atmosphere this helps to convey is pretty darn good and all the characters, especially the gruesome monsters, look superb. Some of the boss monsters are enormous and mightily impressive!

The various areas of the game have been well thought-out too and the attention to detail is top-notch. For example, the game apparently takes place near Christmas as there are decorations and jingly music around the shopping area! The voice-acting, whilst not cringe-inducing, is a little below-par but the rest of the music is of a high standard too. Some of it's creepy as you would expect, but that Christmas tune is brilliant. There's something very surreal about shooting the crap out of disgusting, mutated creatures while music as happy and jolly as that is playing! A vast majority of the game is viewed from a third-person perspective and, mercifully in my opinion, control over Eliot/Dogs is more akin to Tomb Raider than Resident Evil which gives the game a lot more immediacy and is greatly beneficial to the enjoyment of the game.

And enjoyable it is too. The graphics, sound, presentation, etc are all about as good as you could expect for a Dreamcast launch title and they still impress today but for one problem - the camera. Yep, it was a familiar story in the late 90's. The view of the action is very good until you find yourself in a cramped corner or something similar, at which point it doesn't seem to know where to go! That said, it's not a game-ruining problem and it shouldn't dissuade you from playing Blue Stinger. The story is engrossing and the interaction between the characters is superb with some amusing banter between them all. The shady Dogs rarely seems at ease with Eliot and even less so when Janine's around (I suspect he'd be ever more incensed if he knew about the revealing pics Sega hid away of her on the game disc!). 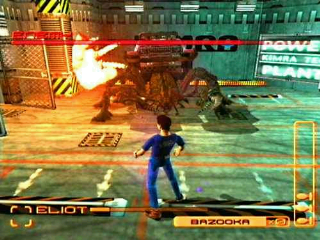 Aside from the camera problem there really isn't and bad points to this game. There's a genuine urge to unravel the mystery and see how things end and there's a good 10-15 hours of tense and atmospheric gameplay before you'll get to find that out. There's also enough secrets and small side-quests to encourage multiple play-throughs and it's enjoyable each time. A survival horror beginner I may be, but I'd like to think I know a good game when I see one, and this is certainly that.