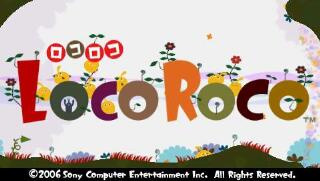 There are very few games around these days that can make me want to buy them just from a mere screenshot. Maybe back in the days of Mean Machines magazine with its amazing shots of shiny new MegaDrive games, but today? Not for me. With that in mind, the chances of there being a game that looks so irresistible that I'll make me want to buy the system it's on just to play it? Surely not? It would have to be a very special game indeed. A game of untold wonder and magnificence. A game so enticingly unique as to awaken a primeval need to explore every facet of its being. Against all the odds, such a game did indeed cross my path. And so it came to pass, RetroKingSimon did unto that day purchase a PSP just to play... LocoRoco. 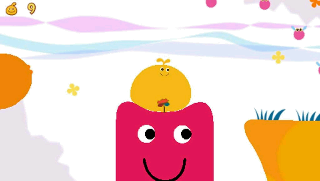 Okay, perhaps that's a slight exaggeration but every time I saw a screenshot of this peculiar game, I became more and more intrigued to the point where I just had to buy a PSP! The game's premise is just as crazy as I had suspected too. It's set on a distant and peaceful planet inhabited by the LocoRoco amongst others. They are cute spherical creatures somewhat akin to space-hoppers and they spend the majority of their time growing things and looking after nature, as well as playing, eating, singing, and generally being happy. That is until the heinous Moja Troop arrived. These invaders from another world want LocoRoco's happy world for themselves but the poor old peaceful LocoRoco don't know how to fight them. 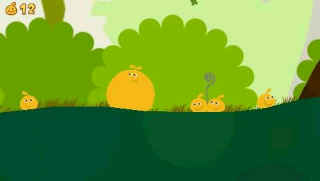 This is where you come in. Rather than taking control of the LocoRoco, however, you take control of the world they live on. Using the PSP's shoulder buttons, you can tilt the world to the left or right and this rolls the LocoRoco across it's terrain. Pressing both buttons at once will cause the world to give your happy beanbag a jolt, sending it briefly skyward. In other words, it makes him jump, and by using these simple controls you can guide the creatures across their world to safety. There are five themed 'zones', each split into eight stages, and the object of each is simply to get to the end. There is of course a bit more to the game than that, however. 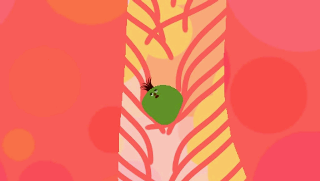 You'll start off with one solitary LocoRoco. To gain more you must find plants growing large red berries. There are twenty of these on every stage and each one eaten will give you an extra LocoRoco who all join the main one making him larger and larger. The landscape isn't always flat and simple though. Some parts are too narrow to fit a large LocoRoco through. In this situation, tapping a button will cause a lightning strike which scares the large LocoRoco into splitting into all its individual pieces which can then fit through smaller gaps. Holding down the same button will cause them to gather and reform into the single larger creature again. Overcoming some of the other obstacles relies on their biggest talent - singing. Take our happy red friend in the first screen shot, for example. He, and others like him, are fast asleep when you encounter them. To wake them up, your LocoRoco must sing a song, but you have a to have a certain number of them in order to sing loud enough! 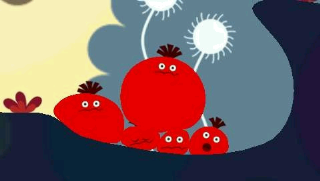 The object of the stages here may well be merely to reach the end but there's stacks of things to find and collect too. Sharing the planet with the LocoRoco, for instance, are the Mui Mui. These friendly creatures are usually hidden in some secret part of the stage but when found will award you with an item for your Loco House (although they'll often need waking up first!). Each stage is also home to dozens, sometimes hundreds of Pickories. These small red fly-like things can be used as currency in the mini-games that are found outside the main game. The first of these is called Mui Mui Crane and is basically a 2D version of those 'grabber' machines found in arcades and fairs. The other is Chuppa Chuppa, named after the creature it involves. Chuppa's are larger and rather strange creatures which can fire a LocoRoco high into the air. The mini-game features many of them who help you to reach the end of a course. 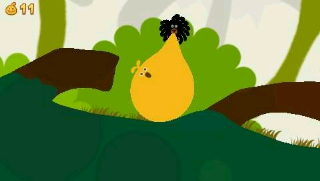 Of course, it's not all fun and games - we seem to have forgotten all about the Moja Troop! These black, dreadlocked monsters also reside on most stages, although there are surprisingly few considering it's supposed to be an invasion. Anyway, the ones that do exist fly around aimlessly until they see a LocoRoco, at which point they'll home straight in. If they manage to grab you, they'll eat one smaller LocoRoco at a time. The only defence against them is to jump into them. This is effective enough against the smaller ones but at the end of each world you'll be faced by a much larger one. Upon defeat of a boss Moja, you'll be given a new colour of LocoRoco to use! As well as looking slightly different, each colour has its own favourite 'zone' and they also have their own variation on the in-game music. 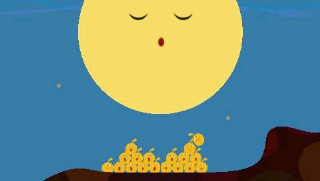 Talking of the music, it is this that has earned the game much of its attention. There are various tunes through the different worlds and stages and each is sung by the LocoRoco themselves. A unique language was created for them and the voice it's sung in depends on which colour of LocoRoco you're using. The original yellow one, for example, has a childs voice, while the pink one has a female voice, the black one a deep voice, etc. The songs also sound slightly different depending on how many LocoRoco's you've found as each one adds a voice to the song. This is all very well of course, but are the choons any good? Well, the official soundtrack has sold nearly as many copies as the game so that fact alone should give you a clue! Suffice to say, the songs are all creative, catchy, and usually very amusing! 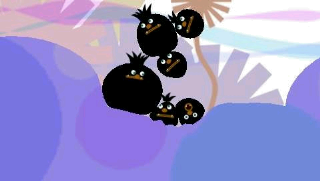 As well as sounding nice, this is also one of the most appealing-looking games I've ever played. The game worlds are fairly varied and include flowery stages, a jungle-based one, dark caverns, and of course the obligatory ice world. Some take place at night and some even look like you're inside a giant animal! Everything is vividly drawn and moves beautifully smoothly and all the various creatures in the game are just as good. The Moja Troop look more amusing than scary (even if they do have teeth) but, as you may have guessed, the LocoRoco themselves are them most appealing characters, and characters they are too! Leave them alone for a while and they'll quite happily jump 'n' jostle around, playing and singing, and while you're moving them around they'll bounce and flop around like a piece of wax in a lava lamp. Look out for the various expressions on their faces too, they're adorable little blobs whatever they're doing. 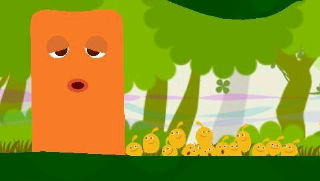 In fact, you'll probably spend just as much time messing around as you will actually trying to play the game! When you split a larger LocoRoco into its component parts, it can be a game in itself trying to keep track of them all as they jump around and get stuck in various nooks and crannies, and the sound effect when you 'regroup' them is something you'll keep splitting them up just to hear! Whether as one or many, however, you'll marvel as they whir through cogs and gears, get stuck to ceilings, swing from vines, fall through revolving platforms and hit pinball machine bumpers, roll down skateboard ramps, zoom through chutes, spring from bouncy floors and lord knows what else, They're immensely endearing creatures and they'll rarely fail to make you smile. The mini games are good fun too and your Loco House can be gradually upgraded and decorated as you acquire new items from the main game which is fantastically designed and packed with secrets and features. 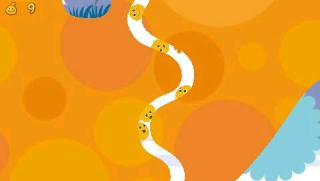 While it's true that the game is rather easy, at the same time, there's often more than one route through a stage and discovering all that each has to offer will take a long time. Plus, perfectionist gamers like myself will strive to find and collect each and every berry, pickory, Mui Mui, and anything else that each stage might be concealing. I must admit to having a soft spot for these cute 'n' colourful Japanese games - it's probably what made we want the game from a mere screenshot, but happily it turned out that there is an outstanding game behind the unusual appearance. It's true that this won't be to everyone's tastes - 'tough' and 'manly' gamers might not be able to stomach the cute, even childish nature of the game, but they're missing out if you ask me. LocoRoco is one of the funniest, most enjoyable, most addictive, and thoroughly unique games I've ever had the pleasure to play. Great fun, pure and simple.

I don't normally like to include videos, but if any game ever warranted it, it's this one!