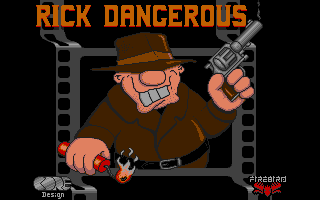 There's not too many games I've played on Atari's most popular home computer but one that I did play is Rick Dangerous, so what better way to kick off my coverage of the great ST! It's notable for being the first release from Core Design, who would later create the Tomb Raider series of course, but for their debut release they took inspiration from the Indiana Jones films. Their own hero is a British agent and is clearly based on Dr Jones, at least aesthetically. He comes complete with fedora and six-shooter (although no whip, oddly), but it remains to be seen how extensive his archaeology skills are. Indeed, it's a game that pretty much everyone has an opinion of, and not necessarily a good one either.

Rick's adventure begins when his plane develops problems en route to the Amazon rainforest to search for the lost Goolu tribe whose territory he soon finds he's crashed right in the middle of, and they're not happy! Rather than attempt to establish a dialogue with them, however, he quickly decides the best course of action is to steal their treasure and kill any of them who try to stop him, and it's this that comprises the first of the four large, side-viewed, scrolling stages. After Rick has escaped from the 'enraged Goolu' his next stop is Egypt where he treats the natives with equal disregard. The third stage requires him to rescue captured Allied soldiers from the Nazi stronghold of Schwarzendumpf castle before he's recalled to London to save us from a secret Nazi missile plot.

Each of the stages is a sprawling 'platforms & ladders' type affair and they are teeming with enemies and traps. Rick is armed with a stick to poke enemies (which doesn't work very well), a pistol containing six bullets, and he can also carry six sticks of dynamite. Each enemy is felled by a single shot but Rick is no stronger than them and loses a life after any contact from them. To begin with they're just in the way but later on they'll start firing back at you too! They can also be killed by dynamite but it's best to save this as it can also be used to disable some of the traps or to move obstacles, and speaking of the traps, it's these that have given the game its level of notoriety. Progress in Rick Dangerous, you see, is tough-going to begin with, but it's also very much of the trial-and-error variety, with the emphasis on the latter! As you'll learn very quickly when playing this game, death can come from any part of the screen.

The enemies generally follow fairly predictable patterns but the multitude of traps often appear from nowhere and with no warning. For example, if you have to fall down a gap, there's a good bet there will be spikes waiting at the bottom for you. Next time, perhaps you'll try to outwit the game and fall to one side or another but the game is usually one step ahead of you. Unseen spikes will thrust out at you from a wall, cages will drop down onto you. If there's a choice of two ladders, one of them will usually lead to a spear through the torso... Suffice to say, it's a rather unfair game! The presentation isn't especially impressive either. The graphics are neat, tidy, and well-defined, but this barely looks like a game on a 16-bit system. Likewise, there's no in-game music, although there are a few jingles now and then and the sound effects are good.

All this considered, it's really difficult to know what score to give Rick Dangerous. It looks and sounds rather basic, it's hard, very unfair, has iffy collision-detection, and will have you ripping your hair out. But at the same time, it's got a lot of charm and is supremely addictive too - it's one of those games where you're certain you'll get just a little further if you have one more try. It's worth persisting too as it's an enjoyable game to play through once you learn the stages and it's very satisfying to do well. There's a good few humorous touches too. For example, the first stage begins with Rick having to evade a large boulder rolling towards him. Sound familiar? Rick's first adventure has aged very well - it's always been one of the few ST games games I've never forgotten and it plays just as well now as back then. It's hard to recommend such an unfair game but I can't help wanting to play it over and over so it's definitely got something!