The most famous console ever? Certainly if you're my age or older, but it's one I have very little experience of. However, unlike my situations with the Commodore 64 and NES, this time it's not because I was an owner and fan of the competition. The Atari 2600, or VCS as it was originally known, was a bit before my time you see. I was a mere two years old when it was first unveiled, and by the time I had developed an interest in video games, it was on, what were at the time, the modern machines. 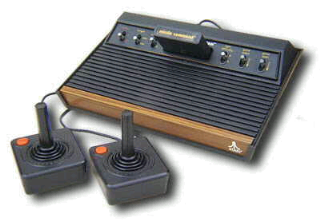 Whether I was there to witness it or not, however, there's no question of the enormous impact the VCS had on the industry, for both good and ill. I think it's also the console that most gets its former owners all misty-eyed until they finally play it again and wonder how they used to enjoy the games! For the most part though, I don't have the problem of any of its games having to live up to precious childhood memories. For all intents and purposes, these are new games to me, so however well they may or may not have aged, I can look upon them with a largely impartial eye. Which games to choose was another matter. Unlike my Exploring the NES series, I don't count many VCS fans as friends. Instead, I've decided to split this feature into two parts.

This first part will feature the few VCS games I remember having played as well as a couple of apparent classics that I've heard much about but never played. These are all likely to be good games though, so the next part of this feature will consist of five randomly-selected games to even things out a little. For now though, here's part one: 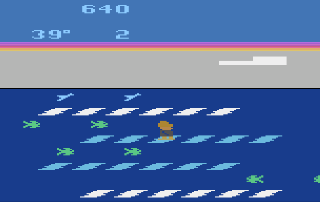 During my school days I had one friend who owned a VCS and it was already pretty old by then. He did occasionally dig it out though, and there were a few games we'd play, but for some reason there's only one I remember today and that's Frostbite. It's basically an Arctic version of Frogger with our hero making his way across an icy river instead of a busy road and the motorised traffic replaced here by birds, clams, and crabs. There are four rows of ice blocks blocks which come in different sizes and move at different speeds. Passing over the ice blocks gradually builds an igloo at the top of the screen which on later levels is also guarded by a polar bear. Simply enter the completed igloo to finish the stage! It's a simple but entertaining game and I'm pleased to see it's still as much fun as it was all those years ago. 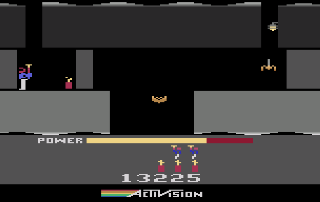 I actually had no knowledge of this game until fairly recently but since then I keep hearing about it all the time so I had to give it a go! I could already see from its attract mode why it's highly regarded and when I played it, it actually reminded of a game I've reviewed very recently. Unlike that game though, it seems the object here is to rescue workers trapped in labyrinth-like mine shafts, using your laser to shoot beasties and dynamite to get through blockages. Each stage starts on a different coloured version of the same screen, but the remainder of the flick-screen stages get bigger and more complicated as you go. The gameplay is rather trial and error-based but it's good fun and very addictive. 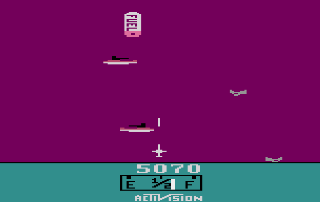 Vertical shooters aren't really a genre I'd ever associated with the VCS but this famous game turned out to be a rather pleasant surprise! I was hardly expecting Raiden and indeed, River Raid is understandably basic. Your little plane can be moved in all four directions and is armed with a rapid-fire cannon which you must use to take out as many of the enemy planes, helicopters, and boats as possible. The plane also has a limited supply of fuel which can be topped up by flying over the fuel icons that are present in each of the long stages. These are destructible though, so careful shooting is required! Like all the best games of this era, River Raid is a simple but very addictive game. The earliest vertical-scroller I've played and it's a good one. 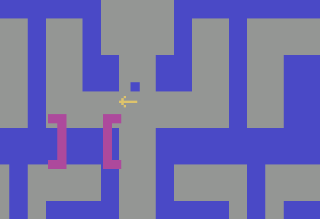 This is another one I've played, albeit very briefly this time. It is of course one of the 2600's most famous games and widely regarded as the first ever adventure game (just as well with a name like that). The object of the game (which I've only just learnt) is to find an enchanted chalice which naturally involves conquering a vast, maze-like world. Your hero, represented by a square (chortle), must brave three castles in this land and make use of the various items also found there to fend off the dragons for long enough to achieve success. Adventure is one of the oldest VCS games and its graphics and sound (or lack thereof) illustrate this but it's a surprisingly enjoyable game which even has good replay value thanks to its randomised item placement. 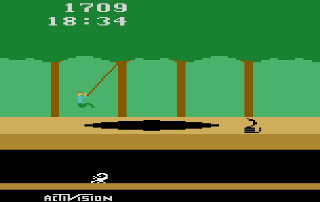 My first taste of this game actually came on a MegaDrive of all systems when playing its semi-sequel, Pitfall the Mayan Adventure. I'm particularly proud too as it was the first hidden 'Easter egg' I found all by myself! Anyway, Pitfall! is far too well known to need a detailed description from me but after playing some other VCS games recently its technical achievements are clear to see. Apparently it consists of 256 screens, which is impressive enough, but the graphics are surprisingly detailed too, given the console's well known difficulties in that area. It's a bit of a 'pixel-perfect jumps' kind of game but that's easy to forgive when it's so playable. Definitely the best VCS game I've yet found, but the search isn't over yet...

Indeed, while these five games have all been great fun as expected, the next five could hold some very good or very bad surprises! I will choose them randomly from a complete list of games for the console and see what happens. One thing's for sure - after playing these games I'm certainly looking forward to it. Wish me luck!