Unlike the two of the previous 'Exploring' features posted here where I asked fans for recommendations of games to try out on the systems in question, this time I didn't. For the first part, I revisited the only VCS game I had spent a significant amount of time playing, then tried out a few of the more famous games that I'd heard of. This means there was a good chance that they'd be great games though, so for this part I've selected five random games to try out. Here's the ones I chose: 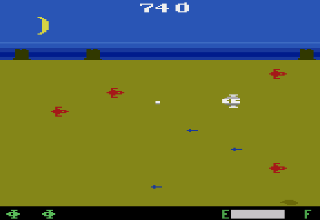 This Spectravideo release was my first pick and I was pleased to find that it's a good one. It plays a lot like River Raid, which I looked at in part one, only turned on its side! Unusually for a horizontal-scroller, it moves from right-to-left and charges you with rescuing downed pilots. To do this you must brave the waves of enemy fighters and missiles, taking down as many as you can, pass over the pilot to rescue him, destroy the enemy city, avoid the ensuing debris, stop to refuel, and repeat! One novel feature is the gradual transition from day to night. During the latter, the enemies are only visible from the flash of your cannon firing! It's a great idea and adds a little variety to an addictive and enjoyable shmup. Blimey, a racing game! There can't be too many of these on the VCS! This one is a conversion of the Sega coin-op released earlier in the same year in which you find yourself in control of a buggy of some sort travelling on a single-lane network of branching roads which are populated by lots of other vehicles which you can jump over (or on top of). The object is to collect ten flags after which you'll progress to the next stage, but the roads can get rather crowded and it's also possible to jump off the track altogether! The arcade version looks quite nice for its time, and this is a brave attempt to convert it, but I'm afraid it looks rather horrifying with ultra-blocky roads and unrecognisable buggies. Luckily it's still pretty good fun to play in short bursts but I think one of the other versions might be a better bet! 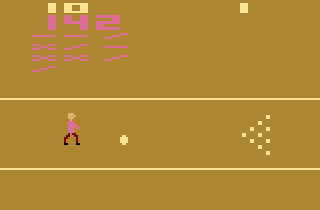 This one must be one of the oldest games for the VCS but does that make it a bad one? Not from what I could tell! As the really smart among you may have already deduced, it's a game based on the sport of ten-pin bowling. This obviously means it's most entertaining when played against a friend but it can be played by a solo-player too and I enjoyed doing so for a short while. The several game variations provide very little variety though, so it understandably gets a bit boring after a while. I imagine this would be the kind of game that I would've had a quick game of every time a friend came round though, and if I had fun playing it for the first time over thirty years after its release, it must've been a hit back then! 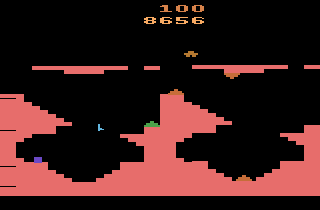 Although fairly well-known as it turns out, this is one I've not personally encountered before. I guess, like the VCS itself, it's a little before my time, but I'm confident I wouldn't loved this if I was a little older! For the benefit of fellow newbies, the original used vector graphics and sees you in control of a small blue spaceship which you must use to destroy various cannons on several planets which can be visited from the opening solar system screen. As well as having to avoid shots from the cannons and rogue enemy ships, you'll also have to contend with gravity and an ever-diminishing fuel supply! Obviously this version loses the vector graphics but otherwise it's a top conversion. Most sections are just as blocky as Up'N Down but it doesn't affect play as much here. The ship remains responsive and it's a very enjoyable and addictive game. 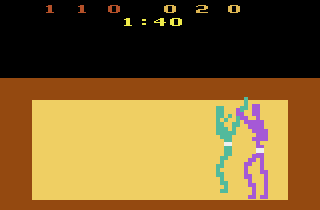 Dear dear me! I've either been pretty lucky with my selections up until this point or this game is something of a freak occurrence; an unwelcome blight on the 2600's back-catalogue. Karate, as you can see, is a one-on-one fighting game, and it's not a very good one. The two stick-figure combatants automatically move toward each other leaving the player(s) to pound the button hoping that the staggeringly poor collision-detection registers a hit. All the while, the figures are constantly jiggling around for no apparent reason. Perhaps tellingly, Karate was apparently designed by a black-belt karate dude rather than an actual game designer, and the result is one of the worst games I've ever played. Sorry karate dude, please don't roundhouse kick me!

Verdict:
I do genuinely prefer playing 'classic' or retro games to modern ones (in fact, I've literally only played a handful of games on the current machines, and only then for just a few minutes). Is it because retro games are better or it is just nostalgia - a desperate attempt to hold on to my childhood? I wouldn't say they're better, necessarily. I think they're just more in tune to my personal tastes and preferences (most notably, my short attention span!), but nostalgia certainly plays a part too. It's no coincidence that a lot of the content here at Red Parsley features games on systems I owned (and in many cases, still own). But if nostalgia is the main cause, then surely it's not the actual games I enjoy, and if this is true, accordingly, the further back I go, the less appealing the games would surely be? This brings me, in a typically long-winded way, to the Atari 2600.

Technically it's not the oldest console, but few would disagree that it's the oldest successful console. I'm sure it was a technical revelation in its day but I think it's safe to say that today, it and its games look rather basic to say the least. The ultra-blocky graphics the console offers, combined with the tiny amount of memory available to programmers, understandably made it very challenging to create anything remotely enjoyable. Fortunately, there were some extremely talented people on hand, such as David Crane and Larry Kaplan, who were able to make the most of the limited resources available to them to create some fantastic games, as I've discovered with this feature.

So, if my love of retro gaming is fuelled by nostalgia, it must still only account for part of the source as I've greatly enjoyed the time I've spent with Atari's famous old console. Most of the games are indeed very basic, and some are terrible, but isn't that true of games on all consoles? The few VCS games I played 25-odd years ago are still enjoyable and I've also discovered some more crackers. The kind of graphics that the VCS produces are perhaps a little too basic for some, and I can understand that, but they are also very colourful, more so than some later systems, and they certainly don't prevent all of its games from being great fun. Near enough all of the games I tried are of course rather repetitive but that was par for the course in those days I suppose.

I think I would've had a lot of fun with my VCS when I was younger if I'd had one and I'm sure I would have immensely fond nostalgic feelings regarding it today if that were the case. I didn't have one though, I barely saw them by the time I had an interest in gaming, but I can see why they were so popular, and it's a testament to the skill and creativity of many of the programmers of the day that so many of its games are still enjoyable.

Next up, I'll be looking at a slightly more modern, and much more powerful system, and I'm looking forward to it already!