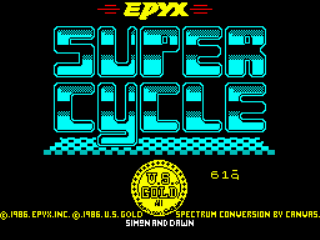 In my quest to find good driving/racing games on retro systems, I thought that this time I'd return to one I've enjoyed previously to see how it holds up today. Of course, when I say 'enjoyed', I don't mean I loved the game - I have an abiding memory of it being far too easy for one thing, but enjoyable games of this type were few and far between on the poor old Speccy so it held my attention for a while. It can be thought of as a budget homage to Sega's great Hang On since both are motorcycle-based, and the objective is also the same - to keep going. Your bike has three gears to get you up to speed and from that point on your only job is to steer left and right, taking care to avoid the other riders. There are no positions though so they're only there to get in your way. 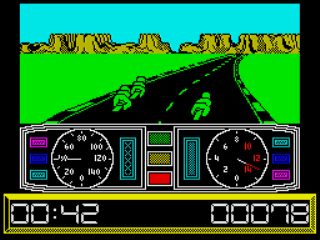 Aside from a flag-collecting bonus round, that's pretty much it too - there's no alternate routes, no power-ups or different bikes to choose - it could literally be a Speccy conversion of the original Hang On, albeit with markedly inferior graphics and sound. Although the scenery graphics and monochrome colour sheme changes every now and then when you pass a checkpoint and progress to the next stage, they remain very repetitive and not very detailed. There is an occasional road-side object but overall the sensation of speed is also quite poor. The sound, predictably for a Speccy, is even worse - it's practically non-existent aside from a highly irritating engine noise so this is one to play with the sound turned down! But is it even worth playing at all? 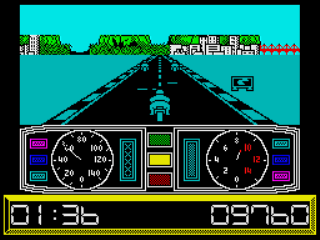 Well, as I said, even at the time of its release it was more of a ten-minute time-killer rather than an engrossing racing game, but time hasn't been too kind to it either, unfortunately. It is indeed as easy as I remember, far too easy in fact, but I've also now noticed the rather questionable collision-detection too. Actually, that's being kind. You can ride directly through other racers, for example, but if you pass by either side of them closely, you sometimes explode! If the game was harder and had more precise collision-detection it would be pretty enjoyable, but those problems make it boring and frustrating in equal measure for the most part, and therefore rather less appealing. Super Hang On is the king of Speccy motorcycle racing games but this game is unfortunately far from Super.