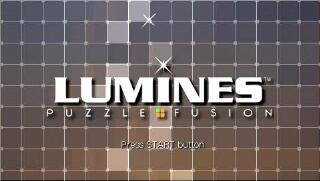 When Sony announced the launch line-up for their swanky new handheld console, I and many others were expecting the same old flashy 3D games found on their other systems to accompany it. This turned out to be a largely substantiated assumption, but there were a couple of surprises amongst the usual suspects. Just about the most un-flashy 3D-ish kind of game around must surely be that of 'falling block' puzzle games, perfectly playable examples of which can be found on the most basic of formats, but here was one nestled next to Ridge Racer and the like. Typically though, this isn't an ordinary falling blocks game even if it may initially seem to be. 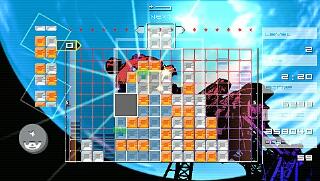 At its heart, Lumines is one of the simplest games of its type that I've played. The playfield consists of a grid sixteen blocks wide by ten blocks high. Falling into this are a succession of two-blocks-by-two squares which are any combination of two colours. These must be arranged so as to create complete blocks of the same colour. If they are four-by-four or larger, they will disappear when the 'timeline' passes over them. This is a vertical line which sweeps repeatedly across the playfield. However, as with the cult hit, Rez, developed by Q Entertainment founder, Tetsuya Mizuguchi, music plays a more active role here than merely massaging your ears as you play. 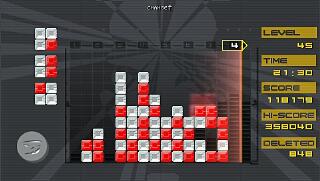 The soundtrack would be worthy of special mention here anyway. Most of the tracks are of the techno/trance style but there are few other styles too and they are outstanding to listen to for the most part. As mentioned, however, they play a bigger part that just that too. Each music track is part of its given 'skin', which also includes the background image and colour scheme. New skins are unlocked as you reach them in the game with a new one arriving every four 'levels', with the level ever increasing the longer you play for. The timeline, which removes matched-up blocks, is synchronised to the music so it sweeps across the playfield faster or slower depending on which music is playing, and your actions can in turn affect the music. This can all make quite a difference. 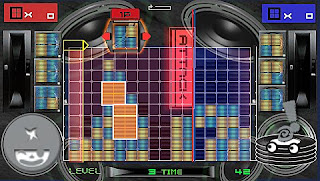 As with many games of this type, progress is made easier by forming as large groupings of colours as possible, and by stragically planning for chain-reactions. The faster the timeline is moving across the screen, the less time you'll have to position the blocks as you wish. The falling blocks can be moved left and right across the screen and rotated so you can place them anywhere you want. Obviously they'll stop when they touch already-placed blocks, but if only half of the falling block is resting on the others, the rest of it will continue to fall. There is also occasionally a special flashing block. This will cause all blocks of the colour it's touching to disappear when the timeline passes over them which can cause some huge chain-reactions!

As well as having fantastic music, the graphics here are also of a flashiness you may not expect from a puzzle game. Many of the backgrounds are animated or feature moving parts which will light up, change colour, or emit sparkly and twinkly effects as you match up blocks. Many of the effects can be caused by a combination of the music and your block-matching antics, and particularly large chain-reactions can fill the screen with flashy explosions and firework-like writing in the sky. The grid itself even has a faint spectrum-analyser behind the blocks! As you can probably tell, Lumines is certainly a game that's a treat for the senses!

Admittedly, a big part of the appeal of the game is its audio/visual splendour, but like Rez before it, it's not just a game which happens to have fancy graphics and music - they combine with the gameplay to create an overall experience, and it's a fantastic experience too! In a slightly different way, Lumines does for the PSP what Wipeout did for the PS1 - it takes an ordinary gaming concept and adds a fresh, exciting, not to mention 'cool' sheen to it. There's a few play modes to choose from too, including time-attack, puzzle, and a split-screen mode which can be played against a second player or the CPU.

The puzzle mode charges you with creating a specific shape with your blocks (which is very hard) while the split-screen mode is interesting in that it moves the line dividing the playfield depending on how well one is doing in relation to the other. It really doesn't matter too much which mode you choose though - Lumines is an addictive and truly entrancing game in any of them. The action can get pretty fast and challenging, especially as you frantically try to place blocks before the timeline sweeps past, but it remains hugely entertaining in any case. I'm not sure many gamers would've expected a falling-block game to be the star of the show at the mighty PSP's launch but I can't think of too many games that are more enjoyable to play.