Back when I was a raging Sega fanboy I was hopelessly loyal to my Master System and MegaDrive and worshipped them everyday. The Amiga and Atari ST were frequently the butt of my elitist teasing and there were, in my opinion, two genres in particular at which the consoles excelled, and which the home computers seemed incapable of matching. One of these was shmups. I've already taken a look at the selection of these available for Commodore's 16-bit powerhouse, so now it's time to see how the other disputed genre performs...

If I review any Amiga platformers in my upcoming feature that get really high scores, they don't appear in this Top Five because I hadn't played them before! (a.k.a covering my arse!) 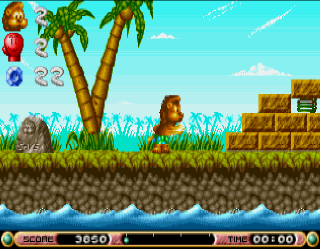 Released by Psygnosis quite late in the Amiga's life, Brian the Lion was, it seems, developed purely so disgruntled Amiga owners could wave it in the face of sneering console owners (like me). Indeed, it's biggest claim to fame is that it features some flashy graphics of the kind previously only thought possible on Sega and Nintendo's obviously far superior machines (hee hee!), including SNES-style Mode 7 effects. Fortunately it's also a pretty damn good game too! Brian himself is a beach shorts-wearing Lion on a quest to save his friends by means of his roar and claws alone! It doesn't appear especially original or unique in any way to begin with, and it is a standard platformer for the most part, but it does have those admittedly impressive visuals, some fantastic music, and a later section even throws in a shoot 'em up! It tries its best to stand out from the crowd and winds up pretty successful. A very enjoyable game that's great fun to play. 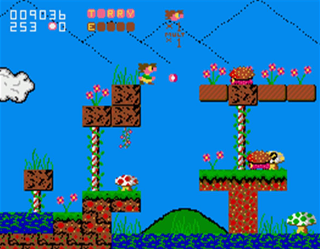 And after the graphical wonder that is Brian the Lion, we come to this game which is from the opposite end of the Amiga flashiness scale. It isn't original or innovative in any way and looks more like a C64 game (actually, there is a C64 version which looks even worse but, curiously, runs faster!). It isn't even particularly well made - the enemies can walk over platforms or water as though there's no difference but the water kills you, of course. None of this matters though as I just can't help but love this game! It's a pretty simple Mario-style game starring Terry who takes out the enemies with his yoyo whilst collecting mushrooms and bonus letters. There's not much more to it than that but the controls are simple and intuitive, the music is catchy, plus it's just great fun, pure and simple. 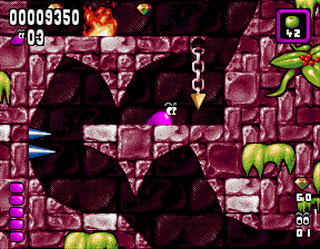 I'm ashamed to say I first discovered this game when a friend gave me a *cough* pirated copy *cough* of it. I hadn't heard of it but figured it was worth a shot. Happily, I soon discovered a platformer of remarkable splendour! Yes, yes, don't worry, I hastily then bought a retail copy of it and it was very much worth it. Globdule stars a pliable purple blob whose dream is to become a top toy. To achieve this he must first brave a series of scary, hazard-filled caverns which he can stick to any part of! Much like Terry's adventure, Globby's is hardly one filled with original ideas, but it is a highly-polished one. It's a very big game too (it came on three 'floppies') and features lovely graphics, nice music, lots of secrets, and a good challenge. Indistinct purple shapes have never been so appealing! 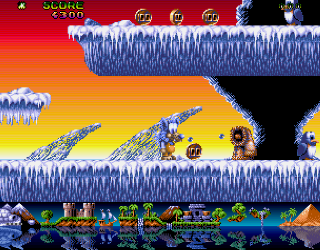 Despite not being an Amiga owner at the time, I heard all about this popular game. I never played it though, even when I did get an Amiga, I'm not sure why. So, playing it for this feature was my 'first time' and... I was very impressed! The star of the game is the rather unimaginatively-named 'Cool Coyote', which nearly put me off, but luckily he is stupid in name only. He controls supremely well which was immediately one of my favourite things about the game. He has a long and high jump which is fully controllable, and that makes navigating the stages a pleasure. They're not simple left-to-right affairs here either but span several screens high as well as wide and are filled with lots of secrets and stuff to collect. Everything is nicely presented too, the graphics and music are fantastic. I can certainly see why this one caused to much fuss in its day! 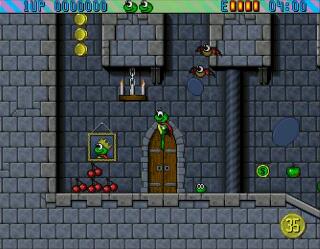 Sorry, it may not be an original choice but this Team 17 classic is very deserving of the reverence that is still receives. It was seen by many as being the title that finally forced console-owners to sit up and take notice of the Amiga instead of mocking it. Whilst I disagree that it was the first console style platformer on the Amiga (it's just as good as most console platformers but it's still very much an Amiga game in style), it is without question the finest platform game I've played on a home computer. It's pretty tough going but the large stages are superbly designed, perfectly paced, and chock full of secrets and bonuses. The controls are also nigh-on perfect and everything's topped off by perhaps the finest graphics and music of any Amiga game. The best from the moment it was released.
Posted by RetroKingSimon at 20:36