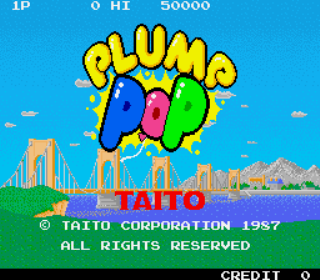 Arguably the first successful game ever was Pong which was a great game for two players, but what about solo gamers? They were soon catered for too when Atari adapted the game for the single player. The result? The all-time classic, Breakout! It wasn't long before clones started appearing, of course. Up until recently, every one of these 'bat 'n' ball' games that I had played quite literally featured a bat and a ball, just like Breakout itself, but as soon as a year after Atari's classic was unveiled, a game called Circus was released by Exidy. This replaced the bat with a see-saw and the ball with two small men (or 'people', I suppose) who bounced each other up and down on the see-saw, destroying the balloons above, which of course had replaced the bricks. It is on this game that the amusingly-named Plump Pop is based. 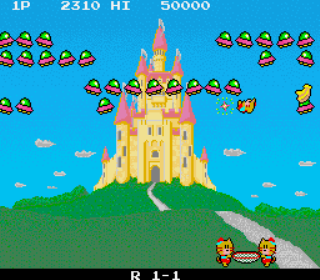 Although Taito had released other Circus clones before, it's this one, released some ten years after Exidy's game, that caught my eye. It replaces the see-saw with a small trampoline which is carried by two small creatures, one either side. Bouncing on the trampoline is a third creature of the same type but smaller. As you may have gathered by now, your job is to bounce the creature up into the destructible objects above. This is apparently to save the land from an evil 'spilit' (snigger). You can choose between three animals before starting - cats, dogs, or pigs. It doesn't seem to make an awful lot of difference which you choose though - the objective remains to clear the single-screen stages of the floating objects contained therein. UFO's are the first but they do change from stage to stage and include the likes of aliens, monsters, bubbles, etc. Some of them drop items such as fruits for bonus points and you can also find three different coloured stars which can explode, taking some targets with them. There's also an occasional bird flying past which you can hit for points but if you take too long, a small dragon will obstruct you on the floor! 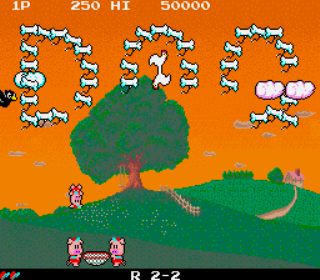 Like many bat 'n' ball games, Plump Pop employs a paddle controller for each player (of which there can be two) and there are forty stages to play through - ten rounds of four stages each. The first stage of each round features objects moving moving backwards and forwards, the second features a stationary shape made of (usually) smaller objects, the third is a bonus round with lots of fruit up for grabs, and the fourth hosts a boss which obviously requires multiple hits to see off. Each round also has a different background image. These aren't bad but I'm not sure I like the style in which the they're drawn. The sprites are pretty cute as you'd imagine, as are some of the floating objects you must destroy with them, but animation is poor too. Generally things look pretty primitive for the time and it's the same with the audio really. The music is quite jolly and happy, and is rather catchy, but it's nothing special either. 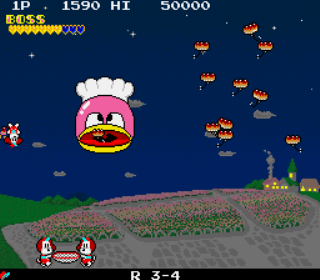 My appreciation of cute games is well known (although I should perhaps have been trying to keep it secret) and a cute bat 'n' ball-style game was an interesting concept. Surely if anyone could pull if off (giggity) it would be Taito? Well, it's certainly cute but I think as far as the gameplay is concerned, they've taken a backwards step from their previous genre offering. Having moving objects instead of different arrangements of coloured bricks robs the game of the kind of fiendish stage design that made Arkanoid so great. This game is also devoid of power-ups too, which further limits its appeal. It's not all bad though. Sending animals bouncing around the screen couldn't fail to be amusing, for one thing! You can make the trampoline-holding animals jump in either direction which affords you a reasonable degree of control over the trajectory of their airborne counterpart but things can get very fast with your animal bouncing around all over the place, so you'll need lightning reactions to prevent them from ending up in a crumpled heap on the floor! Overall, Plump Pop approaches the genre from an interesting angle, and it can be great fun, especially with two players, but more times than not I'd still rather play Arkanoid.


Special note: If you do want to play this game, it's probably best to go for the PS2 version on Taito Legends unless you're lucky enough to find an arcade version. It doesn't play well via emulation since it was made to be used with a paddle controller.
Posted by RetroKingSimon at 21:29