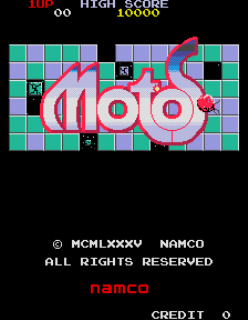 Whilst I still think it was a good idea, I don't seem to have had much luck with this 'Random Game' feature so far. The first two I chose both turned out to be worse than finding a dead mouse in your hamburger, but surely I can rely on Namco to buck the trend? Actually, seeing as it is by Namco, and an 80's arcade game, I'm rather surprised to find that I hadn't already heard of Motos, but a mystery it was. Happily, first impressions were good. It's a simple game and so was quick and easy to get to grips with - each single-screen stage features a grid floating above the vacuum of space. Starting in the middle of each is a small bumper-car type craft, about the size of one grid square, which you can move around the grid at will, each of which is also populated by numerous enemies. 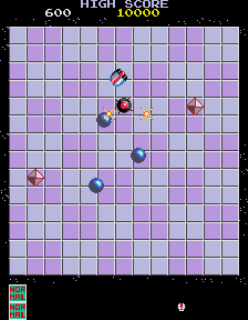 There are fourteen different types of enemy altogether, with new ones being gradually introduced as you progress through the game. Each stage is completed by defeating all the enemies that accompany you on the grid and this is done by bumping them off the edge into the black void! They mostly take the form of various types of bugs (e.g. Pupae, Fire Bee, Beetles, etc) and each has a different speed and weight. This obviously makes them progressively harder to bash about and also means they can bash you back increasingly effectively! If you get knocked off the edge of the grid you'll lose a life and if you run out of lives, that's it. Unusually for an arcade game there's no continues here so if you want to try again, it'll have to be from the beginning! 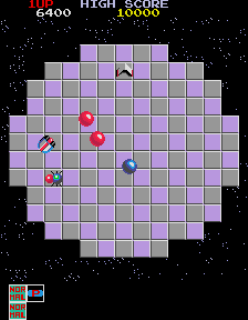 This is one of the reasons, although certainly not the only reason, that Motos is one tough game! Apparently there are 62 stages but I can't imagine I'll ever see them all without cheating in some way. Aside from the introduction of new enemies, the gameplay varies little throughout play. Later stages do attempt to mix things up a bit by adding enemy generators (meaning you have to work very quickly) and by varying the shapes of the grids (including ones with gaps in the middle - eeek!), and there are power-ups now and then which increase your craft's bashing power or enable it to perform jumps. It's also worth mentioning that if you take too long on one stage, meteors will start raining down, breaking tiles on the grid when they hit it! 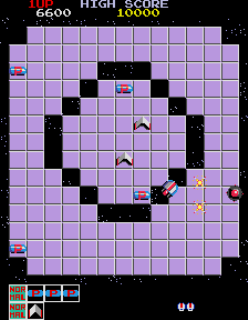 The enemy AI is surprisingly good for a game of this age too - even near the start they gang up on you and take advantage of your proximity to the edge of the grid, and as you progress, they do too, getting ever more nimble and diving out of your way. A good proportion of player deaths are actually caused this way! The graphics are quite basic, even for the time, but are very tidy. I like neat, symmetrical-looking games like this, and some of the sprites are great. The robotic-bug theme is unusual but suits the game well and they are nicely-designed for the most part. Sound-wise, the effects are fairly minimal but decent enough and there is various little jingles as well as a fairly tense-sounding main in-game tune. It suits the action well but does grate a little after a while. You'll probably hear it a lot though as Motos is very addictive! In spite of having to start from the beginning each time, the urge to progress far into the game is quite strong. There are also a lot of variables during play so one session may go disastrously while the next may go amazingly! It's all good fun though. It can get frustrating, and is rather repetitive, but you'll still play it again to show the stupid bugs who's boss! A unique and original game that finally brings some success to the Random Games feature! Whether you've heard of it or not, give Motos a try.