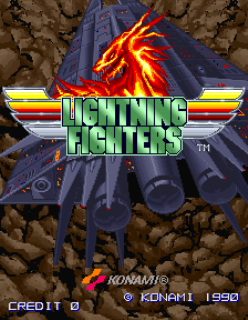 It was while selecting the latest instalment of my 'Random Game' feature that I discovered this title and it's another apparently obscure, little-known game by a big-name developer which I knew nothing about. It's known as 'Trigon' in its native Japan and at first glance it appears to be a thoroughly unremarkable vertical-scroller. Perhaps, you might therefore think, its obscurity is for good reason. On the other hand, perhaps it's an under-appreciated gem, who knows! After initially sneering at it dismissively, I quickly inserted (giggity) some virtual ten-pence pieces and gave it a whirl, and... it's not bad! The first thing that struck me about it is its 'arcadeyness' - it's loud and boisterous, and features a decent attract mode - it certainly would've caught my eye if I'd seen it! 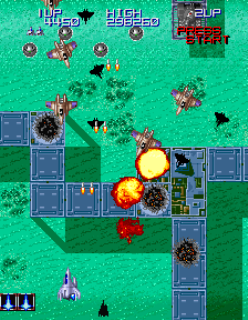 As you can probably tell from the screenshots, it's a bog-standard, military-style shmup which means it takes its influence from such games as Flying Shark, Tiger Heli, and all the rest. You control a slightly weird-looking jet fighter (I expect it's an 'advanced prototype') and pretty much as soon as you take off you're set upon by squadrons of enemy fighters and shot at by lots of ground-based cannons. Your fighter is equipped with a basic forward shot. This can of course be powered up by collecting the relevant icons which appear when you destroy certain enemies. This icon alternates between an 'S' and a 'V'. The former increases the power of your default cannon, which becomes a 'spread' shot whilst the latter replaces it with the vulcan cannon. 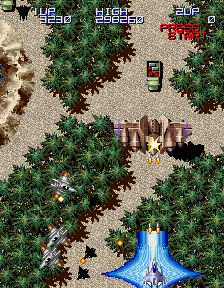 As you may have guessed, the spread shot covers more of the screen while the vulcan cannon has a much narrower range but is more powerful (and rapid-fire which gives your trigger finger a break!). There are also two 'super attacks' available. You don't get any of these as standard and must collect them in the same way as the weapon power-ups. The icons alternate back and forth like the weapons one as well and the choices are Particle Beam or Dragon Laser. The particle beam is the one you may have spotted in one of the screenshots here - it's a powerful forward blast which will destroy anything it touches. The dragon laser is even more useful. It sees your jet unleash a fiery dragon which swirls around the screen for a few seconds, taking down everything it touches as it goes! 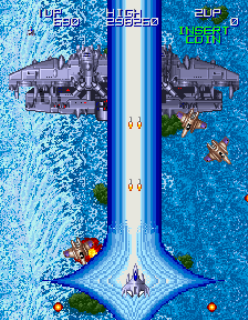 Of course, neither weapon takes down a boss with one hit but they do cause quite a bit of damage. Having said that, the bosses also have weak spots and if the weapon doesn't hit this, it will do no damage, so careful use is still required! There are nine stages altogether. The eighth is something of a boss-rush which fooled me into thinking it was the last stage, but there is another. Each includes lots of smaller enemy crafts and guns but as you progress, larger and larger enemies will begin to emerge which are of course more powerful and are harder to destroy. The bosses are generally the likes of giant tanks, ships, aircraft, etc, but curiously, you don't actually have to destroy them - if you merely avoid death for long enough they'll go away on their own! 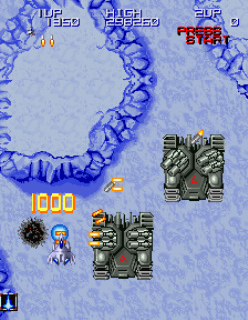 Other than a few minor points of note, Lightning Fighters must sound like a wholly unremarkable game, and to be fair it is. There's few collectibles (the only one not mentioned so far is the stars which can be picked up for bonus points) and the stages are all set over terrains we've seen dozens of times before. The first stage is a partly-watery one and there's a full-on sea stage later on too complete with battleships and all that kind of thing. There's also an Arctic stage, one with trees, etc. Despite their lack of creativity, the backgrounds are quite pretty for the most part. The first boss encounter takes place over a huge waterfall, for example. The sprites are also detailed and nicely drawn but not particularly varied through the game, as is often the case with this style of shmup. 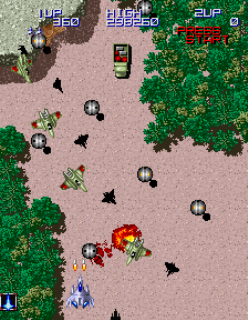 As mentioned, the music and sound effects are rather loud and they suit the action well enough too, but are instantly forgettable. There is some good quality speech but, all-in-all, Lightning Fighters sounds like the epitome of mediocrity to write about. For some reason, however, it's not to play. It's a pretty tough game - all power-ups are lost when you lose a life and enemy shots are quite fast, always homing in on your position - but if you lose a life you'll continue on from the same point. This isn't the case with the Japanese version as I understand it, but it's welcome here! There's also a good two-player mode including some co-operative weapons that only appear in that mode. More than all this, though, it's just a very slick, well-designed game. Control over your fighter is smooth and reliable which, along with the nicely laid-out stages, makes this a very enjoyable game. It's not original or especially flashy, and it could certainly be better, but any shmup fans who haven't played this little-known Konami offering would do well to seek it out.