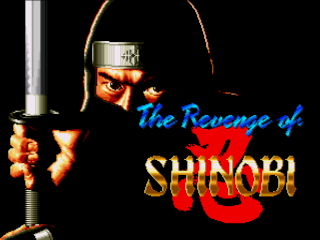 It might seem obvious to follow up a successful game with a sequel or two but not all of them receive one. As we know now however, Sega sensibly released many sequels to the classic Shinobi and the first two appeared very close together. First came Shadow Dancer, a fellow arcade game which updated the basic Shinobi formula nicely. Following closely behind it was this game, known in Japan, where it was first released of course, as Super Shinobi. Here in the UK it was renamed as above and was a launch title for the eagerly-awaited MegaDrive console. Even now, there has seldom been a launch game that so ably and immediately demonstrated the abilities of the system on which it's based. The effect it had on me was profound at the time and is still keenly felt today.

The story is the same old nonsense and is perhaps the least interesting aspect of the game. Happily however, it does involve the hero of the first game (and indeed most Shinobi games), who returns here to save the day once again. Yes that's right, the mighty ninja master, Joe Musashi, is back! Also returning are his mortal enemies from the first game - the ghastly Zeed gang, newly tooled-up and rejuvenated, and with a (slightly) new name too - the Neo Zeed. They've been up to their old tricks and this time it appears to be personal. As well as kidnapping Joe's beautiful girly, Naoko, they've also assassinated his sensei. Filled with rage, Joe vows to travel to all corners of the world to track down and punish the Neo Zeed and will not rest until the vicious enemy has been destroyed.

Despite the presence of a black-clad ninja on the title screen, Musashi is this time decked out in a white keikogi, much like his son in Shadow Dancer (but minus the dog). In order to rescue his girl and avenge his master he must fight the Neo Zeed over eight themed levels spread across much of the world. Each level is divided into three stages - two large, usually multi-tiered affairs followed by a boss fight. Of course, the stages are populated by the Zeed minions who include various types of ninjas, soldiers, mercenaries, samurai, and all sorts of martial arts thugs. Some merely attack with various punches and kicks while others are armed with shurikens, guns, grenades, flame-throwers, or various ninja weapons. Attacks from any of them deplete Joe's energy bar (although contact with the enemies themselves doesn't always cause damage) but he is of course sufficiently-equipped to dish out the hurt too!.

His arsenal is much the same as it was in the original - he can kick and stab enemies at close range and he can also fling shurikens. Unlike the original, however, he has a finite supply of them. The number he starts with depends on the difficulty level selected (which also determines how many lives he starts with) but luckily more of them can be collected during the course of the game by breaking open the wooden crates that are in plentiful supply. One additional, and very useful move available here is the somersault. By pressing the jump button again when at the peak of a jump, Joe will perform a somersault in that direction. It's also possible to unleash a volley of eight shurikens which spans from directly ahead to directly down. As you might imagine, this uses up your supply rather quickly but it also covers a lot of the screen and can take out multiple enemies at once.

Also making a return is the ninja magic. You get one per level/life and there are four kinds available: Ikazuchi - the Art of Thunder (a lighting shield which protects you from a set number of enemy attacks), Kariu - the Art of the Fire Dragon (fills the screen with scorching fire, killing minions and damaging bosses), Fushin - the Art of Floating (greatly improves your jumping height enabling you to reach previously inaccessible locations), and Minjin - the Art of Pulverizing (turns you into stone, then you explode!). Minjin should only as a last resort when you have little energy remaining. It's effectively a smart bomb and causes devastating damage, but it also costs you a life! Luckily, as mentioned, there are lots of wooden crates around. As well as containing more shurikens (which comes in fives or twenty-fives), you can also find extra magics, extra lives, health, and a shot power-up which doubles the size and strength of Joe's shurikens as well as giving him a sword for close-quarters fighting. The crates aren't all so helpful though - some contain bombs which explode if you get too close!

So far it probably all sounds fairly by-the-numbers but the secret of Revenge of Shinobi's greatness isn't what it does but how it does it. The game begins with a short but explosive introduction sequence which, despite actually featuring very little, still manages to set the tone superbly for the game and was unlike anything I'd seen outside of an arcade before. The presentation is exceptional throughout too. For example, when you start the first stage you'll find leaves blowing around and the moon is gradually rising, turning the sky from an evening pink to the black of night. There's lots of small touches like that through the game and it's great. There's also a small map screen between levels, a pause screen where you can select your magic - everything really is of superb quality. One of the first examples of this you might notice in-game is the audio.

Composed by the great (and now very famous) Yuzo Koshiro, the soundtrack was absolutely amazing at the time and, even more than the graphics, was what impressed me most about the game on first impressions. There are around fifteen named tunes so some do repeat on a couple of stages, but considering their quality, fifteen is plenty for me! They all suit the stage on which they feature pretty well too, especially the far-eastern themed stages and the boss stages. The latter stages all feature the same music but it's a good piece! Graphically, the game is also supremely impressive too. The animation is a bit of a mixed-bag with some superb examples like the explosions (all the enemies explode - they must be cyborgs!), and some less impressive examples like the guard dogs which move like South Park characters! That's the only blot on the landscape though - the many stages are very nicely designed and feature lovely background and foreground scenery for the most part.

They are pretty varied too. Predictably, there's some office blocks, military camps, and far-eastern village-type stages (including secret underground passages), but there's also a few more original locations such as a waterfall, atop a moving train, and a highway complete with fast-moving traffic! The bosses seem to be rather generic to start with too - the first is a giant samurai, for example, but later ones include a missile-carrying truck, a tyrannosaurus rex, and even Spider-Man! There's a few other nods to movie characters to be found too but I won't spoil it! The normal enemies aren't quite so imaginative but are all well-drawn and all look the part superbly. Few of the stages are very large but they are all so packed with cunningly-positioned enemies that they should last you a good while. That said, this isn't the most testing game of all-time either.

As you may have noticed from the screenshots, there is a cheat for infinite shurikens (tee hee!) but if you play this game 'properly', it presents a good challenge. Control of Joe is superb. Performing his somersault move often causes newcomers problems but it's fine once you get the hang of it and it's an essential skill to learn too. This is also a fair game. The shot power-up not only increases your attack strength but allows you to block enemy shurikens. Plus, if you get hit while powered-up, you'll only lose the power-up, not any energy. It's like they thought of everything! It really is difficult to imagine how Sega could've made Revenge of Shinobi any better. It looks and sounds fantastic and plays just as well, with varied, intelligently designed stages and is jam-packed with addictive ninja action. As one of the first ever MegaDrive games it was nothing short of a revelation but it hasn't aged a bit and it's a testament to its brilliance that, even near the end of the MegaDrive's life, it was still considered one of the console's best titles. A genuine landmark MD title and an all-time great.