Unlike the poor old Saturn which came before it, the Dreamcast was positively heaving with top quality racing games and a sizeable percentage of my time with Sega's final console was spent playing them. On launch day I bought Sega Rally 2 along with a steering wheel and, while the wheel proved rather tricky for controlling that particular game, I soon had plenty of others games to use it with. Not since Burnout 2 was released on the GameCube have I spent so much time on a console playing one particular genre and my trusty DC (or a DC - they're hardly the most durable consoles ever!) still occupies a lot of my time. This was one of the hardest Top Fives to compile so far, but here are the games I settled on: 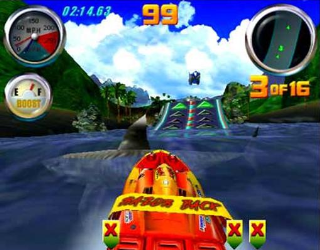 Racing games generally come in two flavours - arcade and simulation - and this multi-platform release from Midway is very much the former! It features a collection of half-boat, half-spaceships which must be raced at super-speeds around a similar assortment of highly creative courses set over rivers and various other waterways. It only has one mode which is a basic arcade mode, and it's a tough game too - new boats and courses are only available upon successful completion of the preceding courses (and in a good position too!) and this is dependent on collecting and using the numerous 'boost' icons. Hydro Thunder might not have much depth but it is a hell of an entertaining racer. One long, non-stop adrenaline rush of a game! 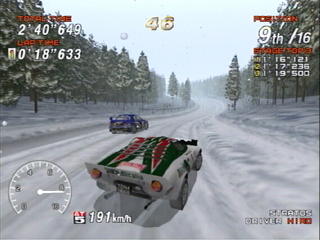 Much was expected of this sequel to the crown jewel of the Saturn. In my opinion it lived up to the expectation but I don't think it was particularly popular for some reason. Maybe it's because the Dreamcast was much better catered for than the Saturn but it's still rather mystifying to me - this game features the same, slidy, arcade-style handling as its predecessor, but gave the player the choice of many times more cars and courses as well. On top of that, there was a several play modes, including the splendid '10 Year Championship' mode and lovely graphics including some fantastic weather effects. With all this in mind, Rally 2 should've been more popular than the first game, not less! Nevermind, I still loved you, Rally 2. You gave me many hours of superb, bumpy, racing action and continue to entertain today. 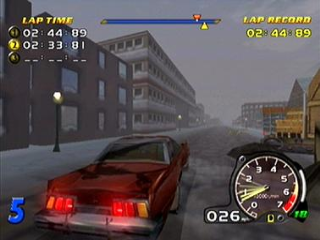 Granted, this isn't the most spectacular of the Dreamcast's racing games, at least at first glance, and it's not the most popular one either, but it's arguably the one I've spent most time playing. One of the main reasons I love it is the handling of the cars which is very smooth and perfect for my DC steering wheel! It also features a fantastic career mode which sees you racing through numerous divisions, each home to several other drivers who you can make bets with and form rivalries with. There are also a good few cars to unlock and modify and some awesome themed courses which all feature unique, not to mention highly original, hazards and obstacles. The graphics and music aren't the best, and it's a pretty easy game, but I just can't help but love it. 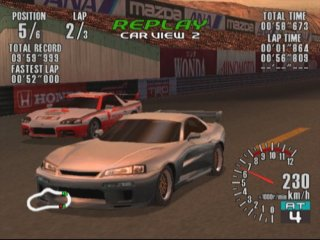 Yes, it's probably one of the most blatant rip-offs there has ever been, but the lack of Gran Turismo on the Dreamcast made this a most welcome, if somewhat shameless release by Sega. It copies more or less everything from Sony's landmark game, even the annoying license tests (although they're far more manageable here), but it does throw in a few ideas of its own too. One of these is the ability to create your very own car! I've created several including some ridiculous spaceship-like contraptions, but they can all be raced as normal. As you might expect, there's also a staggeringly large selection of real cars to buy and modify too, including several manufacturers not found in Sony's effort. There's loads of competitions to get stuck into aswell. The only down-side to this great game is the slightly wonky car handling but it's okay when you get used to it. An exciting game with a lot to do. 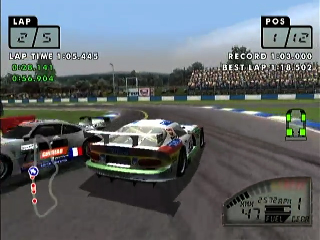 Released as part of the Test Drive series in the States, this superb game wasn't very well known for some reason. I had never heard of it when I saw it in a shop but I took a chance on it which more than paid off! It has quick race, championship, time trial, and multi-player modes but the main attraction for me was the Le Mans mode itself which is a real test of endurance, even in digital form! You can race a shortened version if desired too but either way the racing action here is of the highest order. It's a perfect blend of arcade and simulation and features some of the finest graphics to be found on the DC including some fantastic attention to detail. Even the PS2 version can't match this amazing game. It may not have the quantity of cars or courses as other games but what it does, it does better than any other game, not only on the Dreamcast, but on most systems!

Special Note: I do own original copies of all the games listed here (even the honourable mentions), but due to my inability to emulate the Dreamcast I had to try and rely on the internet to find screenshots, and it was a pain in the arse. I'd therefore like to take this opportunity to say a big FUCK YOU! to the ridiculous tossers who tag their screenshots. Yes, I'm looking at you Gamespot, IGN, C&VG, and all the rest of you. Grrrr!
Posted by RetroKingSimon at 17:44