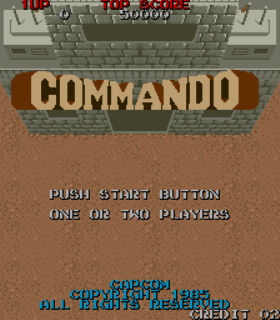 If I were to count all of the games on most of the modern consoles by genre, which type do you think would have most examples available? I'm willing to bet it would be first-person shooters, and like all modern genres, these too have their roots in much older games. While it's true that there were some attempts at first-person games as far back as the early 80's, I think that overhead run 'n' gun games have been more influential over first-person shooters than any other genre has. With that in mind, I suppose I can only feature them for so long here at Red Parsley before I come to this particular title, which is a great example of what I'm talking about - it's an FPS, but from above! 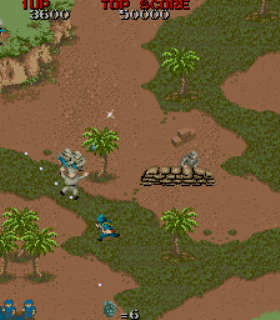 To be honest I'm not sure if it's the first game of this type but it was certainly the first popular example. Released by Capcom in 1985, it was an immediate hit and no wonder. It was a new and exciting concept and even tied in with many of the kind of action films that were popular at the time. Like those films, it features little in the way of plot too. It's your familiar 'lone soldier takes on entire army' type scenario with the soldier in question here going by the heroic moniker of Super Joe. The start of the game sees him getting dropped off in an unspecified jungle where he is immediately set upon by waves of hostile enemy troops just waiting to cut him down. 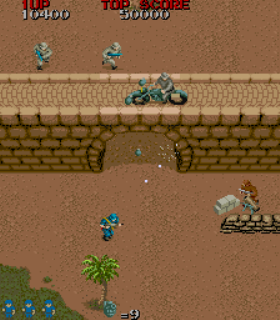 Fortunately, he's suitably equipped to fend them off. His machine gun has unlimited ammo and can be shot in whichever of the eight directions he's facing and he also has a limited cache of grenades which can only be thrown directly up the screen. There are four different stages which are repeated once you've cleansed them of enemy scum who are almost exclusively comprised of generic soldiers. To begin with they are armed with the same weapons as Super Joe but a few later enemies are equipped with rapid-fire RPG launchers. There's also an occasional gun turret, and vehicles like motorbikes and trucks drive across the screen now and then which doesn't make this tough mission any easier!

The trick to succeeding in this game, and indeed many subsequent games, is to keep on the move. The main reason for this is that, inconveniently, the enemy soldiers are infinite. They are also quite often protected or hidden, making them more difficult to take out. They can be found in trenches, bunkers, and watch towers, but wherever they come from, the further into the game you get, the more numerous and accurate they inevitably become. Control over Super Joe is pretty good and his gun, which has a range of less than half the height of the screen, incidentally, is accurate nonetheless. He does, however, have an annoying tendency to get 'stuck' on some scenery. 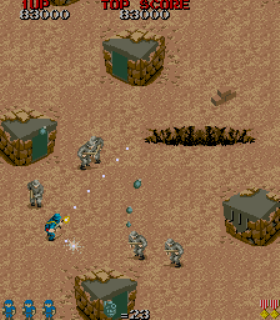 This is my biggest problem with the game. It can prove very frustrating, resulting in many unfair deaths, and had me gnashing my teeth every few minutes! With some careful play its effect can be minimised somewhat but it's still very annoying. This kind of manic game is hardly the kind that gives you time to be careful, after all! The graphics have understandably dated somewhat too and are very repetitive with very few different enemy designs and the stages, which take in jungles, airfields, and that kind of thing, are samey-looking. The sprites are fairly well drawn though and the choice of colours though the game creates a decent atmosphere. The music isn't bad but can also get a bit repetitive. Chances are, if you're playing the actual arcade version of this, you won't last that long, but you'll at least get to use the cool high-score name-entry a lot! Despite its flaws, Commando is still enjoyable in short bursts, and I guess that's the way it was designed to be played. It's fast-paced, reflex-testing, addictive, and over quickly! It feels wrong to be too harsh on it though. It has aged, more so than some other games of the era, but its immense influence is clear for all to see. I just wish it didn't make me so angry!

Special Note: A big thanks to Steve Drysdale for helping me get this pesky game working in MAME. Thanks a lot mate! :)
Posted by RetroKingSimon at 20:55