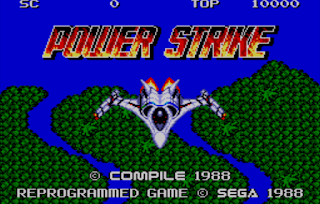 While it may be largely unknown to some Western gamers, the long-running Aleste series now numbers more than ten games which have appeared on a variety of 8-bit and 16-bit systems over the years. Predictably, they are based on an anime series in which an evil 'Super Computer', having been infected by a virus, is attempting to wipe out mankind! As is often the case, not all of the games based on it were granted a Western release and some of those that were have seen some changes. This Master System game is a conversion of the first Aleste game and outside of Japan it was known by a different name - Power Strike - and featured an entirely different story. Gone was the malevolent Supercomputer in the version I owned for my MS. In its place is a story involving good old crazy scientists and a botched experiment!

Yep, you can always rely on those pesky scientists to expose us all to untold terror, huh? The outcome of this particular incident has seen the birth of many monster plants with super-intelligence which have taken over the feeble brains of unsuspecting humans, forcing them to produce the heinous weapons to destroy their own people! Eeek! It seems at least one human has evaded the terrible plants though. He, under your control of course, must pilot Power Strike, the world's most advanced jet fighter, and wipe out the ghastly plants as well as their machines piloted by zombie human slaves with the ultimate goal of destroying the horrifying 'Mother Brain'. What this essentially boils down to, as you can probably tell from the screenshots, is a vertically-scrolling shoot 'em up.

This plant-smiting action is spread over six rounds which are crammed full of evil enemy attackers. These include aircraft - millions of small ones as well as a number of larger ones - and there are also a lot of ground-based gun emplacements and installations which also come in a variety of shapes and sizes. It's the latter, in much larger and scarier form, which also comprise some of the middle and all of the end of round bosses. Fortunately, in the face of such sheer unbridled horror, your Power Strike fighter is equipped with two different weapons which it can employ simultaneously to weed each of the rounds, ridding them of the the evil plants and machines alike. Both weapons are pretty feeble to start with of course, but happily they don't stay that way for long!

The first weapon is a weak, yellow, forward-firing shot. This can be powered-up by collecting the many yellow 'P' icons that some small ships carry which will (eventually) increase the number of shots you can fire at once. The P's will fall rapidly toward the bottom of the screen once their carriers have been destroyed and you must catch them before they disappear! The other weapon is blue plasma which can be deployed in several ways by collecting the numbered icons. There are eight variations which include the standard directional shot (which you start with), laser cannon, and R-Type style charge shot and there are also more original ones like the Homing Flame, Swing Web, and Wipe Laser. These can also be powered up by successively collecting the same number icon.

This is one of the most interesting things about Power Strike actually, but I still can't decide if it's a good or bad thing. All but one of the plasma weapons, you see, lasts for a limited time. There are plenty of the numbered power-ups around so you could almost certainly have a constant (or at least nearly constant) supply of them but the default directional shot (number one) lasts indefinitely. Considering that it's also a more than capable weapon, it doesn't make too much sense messing around with the others. Once you've powered it up, it's also capable of destroying the bullets fired by enemies too. Before you get to this point, Power Strike is a very tough game, especially since you lose all of your power-ups when you lose a life, but if you do manage to power-up your weapon sufficiently, the difficulty level then swings the other way and the game becomes rather easy.

Having said that, the game's AI is good enough to see if you're doing well or not and throws more or less enemies at you accordingly, but a powered-up ship will still slice through all comers nicely. Uneven difficulty curve or not though, I'm still finding it hard not to heap praise upon this fine game! From a technical point of view it has to rank among the Master System's finest games of any genre. The sound effects and music are great and suit the game well (although they're a bit funny when running the game via emulation) but it's the graphics that impress the most. A majority of the sprites are pretty small but there are millions of them zooming around the screen at once with hardly any slowdown or flicker! Okay, perhaps not quite millions but if you include the bullets (both yours own and the enemies), there is a lot of movement at once. Considering how much the MS usually struggles with that kind of thing a lot, it's a pretty amazing achievement.

The animation isn't great - I guess it seldom is in shmups - but most of the enemies are nicely detailed and there's a good few different types with some creative attack methods. The backgrounds aren't all that varied either. Most of them consist of only marginally different coloured patterns and textures but there are some great touches like the old office blocks which have become consumed by vegetation, and the desert which gradually opens to unveil a base. They are all nicely drawn and each suits the organic premise of the game well. All this might make it sound like Power Strike is a fancy graphics tart of a shmup with little in the way of gameplay, but happily nothing could be further from the truth. Now that I stop to think about it though, I'm not sure why.

I suppose it's possible there's some nostalgia and loyalty creeping into the equation - this was after all the first shmup I over owned on a console - but it's a unanimously well-regarded game too so it's not just that. I think the greatness of Power Strike comes in part from it not overextending itself. It sets an achievable goal and devotes itself to it. The result is a supremely polished and slick game. Control of your ship is faultless, the collision-detection is spot-on, the stages are challenging and packed with stuff to keep your attention whilst never becoming over-complicated, and as mentioned, the aesthetics are fantastic. With the possible exception of that slightly squiffy difficulty-curve, I think it just gets everything exactly right. Proof of this lies in the fact that it plays just as well today as it did 20+ years ago. The best shmup on the Master System without question.

Gameplay Video: here's a video of the whole game being played by one of the talented fellows at World of Longplays (check out their great channel here). I should probably point out that they are running the game on an FM-powered console (or emulator) which, in my opinion, doesn't sound as good. Oh, and as always, don't watch if you want to avoid spoilers!