I don't know if it was caused by the admittedly-sizeable expense of new games for my Master System, but one Christmas morning I had a nice surprise. Well, I had a nice surprise most Christmas mornings but on this one in particular I was rather taken aback when I unwrapped a sizeable and fairly heavy gift to find a picture of a ZX Spectrum staring back at me. I'd briefly used other people's computers - my good friend Luke's Dragon 32, a school friend's CPC, but a majority of my experience with computers was at school where they had some BBC Micros. These were I'm sure great computers in their day but they weren't very up-to-date at that time and were hopelessly inadequate for school work. So, aside from a few games of Chuckie Egg and Bomb Jack on my friends computers, my opinion of them was fairly low overall. But then came the Spectrum! 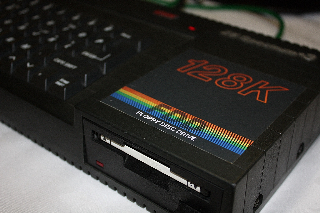 I didn't know it at the time but it soon became apparent that this was no ordinary Spectrum either. As a result of Amstrad's buy-out of Sinclair, they wanted to freshen up the range, so they launched two new models - the Spectrum +2, which had a built-in tape deck, much like Amstrad's CPC 464, and the Spectrum +3, which had a built-in floppy (giggity) disc drive, like Amstrad's CPC 664 and 6128. These discs were a curious format. The biggest problem of being an owner of a Speccy, CPC, or C64 was waiting an eternity for games to load by cassette. I already knew this well before the Christmas gift, and the disc was an ideal solution to this problem. The unfortunate side-effect of this was the inevitable price increase which wasn't helped by the fact that Amstrad had opted for the 3" disc format rather than the already-popular 3.5" ones used by other computers. Needless to say, it was the stylish, jet-black +3 which I received that morning.

Well, I say 'I' but it was actually a joint gift to be shared with my pesky sister (just joking siss!) so it went in a neutral room, but it was, unsurprisingly, I who spent the most time on it. The additional cost of games on disc didn't really matter to me at that point - I was still at school so I didn't have to pay for them, and I could still connect an external tape deck as millions of Speccy fans had done for years anyway. My thoughtful parents had also bought a couple of compilations on this fancy new disc format for us to enjoy, and it came bundled with an Ocean Software compilation which was apparently exclusive to the Dixon's electrical store chain. My experiences with the trusty Speccy would certainly prove to be interesting over the years but, after my dad had spent what seemed like an age tuning it into our portable TV, it was these games that we tried first... 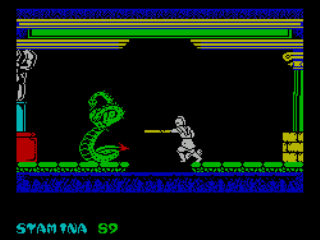 My dad had taken charge of the situation until we had confirmed everything was working and this was the test game. It's a flick-screen game which sees you in control of a Greek guy who has wings on his boots that let him fly around! After much aimless wandering around from room to room we decided it might be best to consult the instructions. This unfortunately proved to be of little use but subsequent research has revealed that it's an arcade adventure set in an ancient Greek palace called Mycenea and has a fairly detailed story. It's a pretty nice looking game and gave me a good introduction of the kind of graphics I could expect from our new computer, but I didn't get very far. I'm sure it's very enjoyable once you know what you're doing but, despite numerous attempts, I never did. 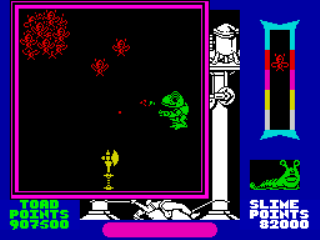 The next game we tried was this one which is by the same developer (Denton Designs) and is, if anything, even more bizarre and hard to work out. Your job here is apparently to rescue the Queen of the Cosmic Wartoads who has been kidnapped by the evil Slime Beasts, but how this is achieved is something I wasn't able to determine. At its start the game presents you with a grid. Each square here presents you with a single-screen 'challenge' (or at least the few I could access did) where you have to defeat the peculiar inhabitants by shooting them. Success earns you 'Toad Points', failure earns you 'Slime Points'. Predictably I never got very far and didn't return to the game very often despite the fairly pretty graphics once again. I wonder if it was good once it was deciphered? 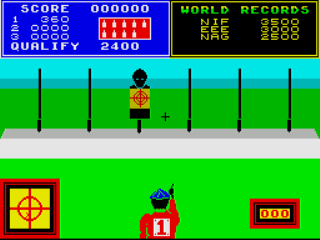 This was more like it! As I'm sure you've guessed, this was one of those notorious joystick and/or keyboard destroyers! I had never played one of these kinds of games before but, unlike the last two, it didn't take me long to work out what to do! It's split into two parts, both of which feature six events including the likes of cycling, ski-jump, tug o' war, diving, and shooting (my favourite). Success in each event required you to waggle the joystick or pound buttons alternately on your keyboard as fast as possible which inevitably resulted in a bent keyboard for my poor old +3. It's great fun though, a multi-event sports sim in the finest style. I soon discovered that there's a good few games like this around but this remained my favourite. My sister even liked this one! 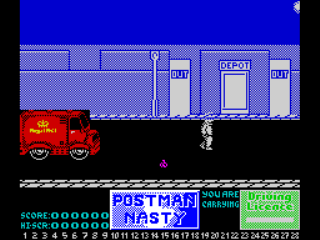 Alas, my good fortune didn't last long. Although reasonably well-regarded, this is another one I couldn't work out how to play at the time. It's a 'postman simulator', but with a twist - it's set in a near-future where criminals run rampant! As Postman Nasty, it's your job to ensure the mail gets through, no matter what gets in your way. To do this you need to collect various items to obtain the mail and well as to defend yourself. Looking back, it's quite a novel little game with some good ideas, but thanks once again to the lack of decent instructions with this compilation, I could never get very far. This is probably the least graphically-impressive game on the disc too so I never felt much compulsion to give it another try, sadly... 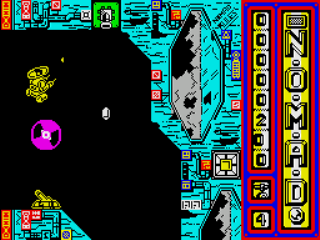 Hooray! This was by far my favourite game on the compilation, my sister's too! It's a shoot 'em up which sees you flying around a flick-screen maze-like structure filled with dangerous defences. I've only recently looked into the story which reveals that this maze is apparently a man-made asteroid which acts as base for an evil intergalactic criminal. Nomad, of course, has been sent as our 'last hope' of infiltrating the base and stopping the dastardly crook in his tracks. It's a pretty big game set over four sections and there are some creative features found within too. Nomad himself, an attack droid, is a little cumbersome to move around which can make the game's later stages rather tricky, but this is still an addictive and very enjoyable game which I continue to play today, now and then.


So, as my introduction to home computer gaming, this compilation was something of a mixed bag. Nomad and Supertest were both great fun and remain so today but the others? Looking into it, it seems they all got at least reasonable reviews in magazines of the day. Was my inability to suss them out a result of my own stupidity? It's certainly possible but lets not forget - up until this point, the only games I'd really played were arcade or arcade-style games, both in their native habitat as well as on my splendid Master System. The fact that the compilation came with practically nothing in the way of instructions certainly didn't help matters!

Oh well, like I said, my parents had also bought a couple more compilations for my sister and I to play, including the immensely awesome Magnificent Seven and Giants, and the Speccy soon became a treasured and much used system. My sister gradually lost interest in it so I was able to move it up to my bedroom (sweet!) and my collection of games was increased frequently. The fantastic budget games sold by my local video rental store were a frequent source of my attention and my dad very helpfully bought all three of the main Speccy mags - Sinclair User, Your Sinclair, and Crash - and the cover-tapes they regularly featured were an invaluable resource. I even got a Multiface 3 the next Christmas which allowed me to see the end of games I had gotten stuck on!

As I mentioned in my 'Exploring the Commodore 64' feature, it's easy to see the appeal of the Speccy's competitors. I'm sure I would've had a similarly happy time with one of those if I'd been given one, and I'd have the same warm, nostalgic memories of that system now instead, but the Speccy it was, and it's a system I still have an enormous amount of affection for...

Special Note: Thanks to Stiggy for the Speccy pic which I borrowed from him without realising! Check out his great blog here :)
Posted by RetroKingSimon at 14:37