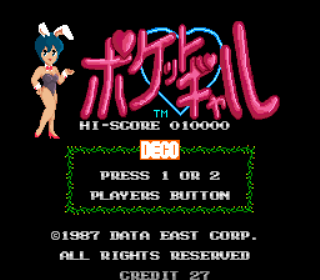 Love them or hate them, videogames are big business. Those of us who partake in their wonders, however, have taken a lot of stick over the years for the sake our 'nerdy' hobby so it doesn't really help matters when developers release blatantly pervy games featuring titillating girlies in various states of undress. Most of the time this is of course a less-than-subtle attempt to grab the cash of lonely gamers with a bare minimum of effort. Indeed, the games that facilitate these giggling girlies are usually utter trash - the flimsiest of excuses for the nudity and immoral material contained within, and that's when there even is a game at all! But could there be any genuinely good games hidden amidst this nonsense? In a series of new features here at Red Parsley, I will bravely attempt to uncover an answer to this intriguing mystery! 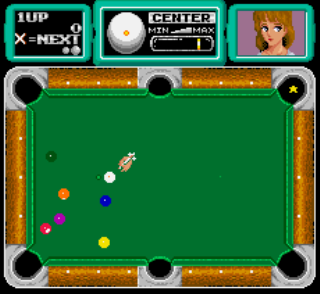 As you've probably already seen, the first game of this feature is a pool-based game. It's a Japanese game but as far as I can tell there's no fancy options or tournaments. When you start, you'll see a chart featuring four different classes, each of which is represented by a 'sultry' lady and you have to work your way up the ranks, so to speak. This naturally involves playing pool. There is a two-player mode but in the one-player mode there is surprisingly no computer-controlled opponent. Instead, you must simply pot all the balls (tee hee!) yourself. Bonus points are awarded for potting multiple balls in succession and for following their numbered sequence. The more points you get, the quicker the girlie will get her kit off! That's right, for the object of the game appears to be simply to disrobe the ladies - first they'll lose their outer-garments, then their underwear, and the further up the rankings you get, the more effort is required to persuade them to do so! Oo-er... 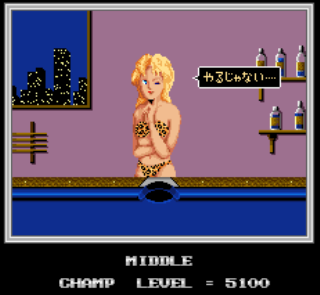 This 'effort' comes in the form of stages. There are more of them per girlie the further you get and they alternate between frames of regular pool (is it still called a 'frame' in pool?) and trick shots. A predictibly simple interface enables you to take the shots - just move your aim, represented by a dotted line, and set the power. It's hardly a complicated process so you should find yourself smacking the balls around (giggity) in no time. There are a few different variations of pool during the course of the game (6 ball, 9 ball, etc) and it's possible to add topspin, backspin, and swerve to the cue ball during play, but that's about as complex as things get. So, your prize for playing well may nudge this game toward the 'adult' side of things, but is it even worth playing it at all? Well, not for the 'prize' itself, obviously - even in its day this was hardly an obscene game - but it's actually not bad. 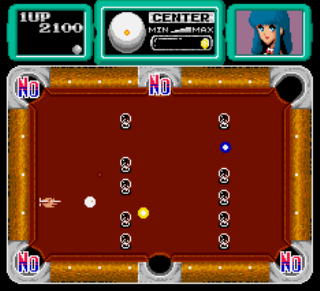 As you can see, the graphics are hardly anything to write home about. The tables themselves, whilst coming in several different colours, didn't exactly require the finest hardware in the world, but everything looks okay. More importantly, the balls move around fairly accurately, at least to my non-expert eyes, and playing the game can be pretty entertaining in short bursts. The different variations and trick shots help to keep it from becoming too repetitive and there's some pretty decent music and sound effects too (even a bit of speech!). As for the girlies themselves... well, they're more amusing than anything else, but that was probably the point I suppose. It's certainly not worth playing the game just to see their 'boobies' but Pocket Gal is a surprisingly enjoyable game regardless. Obviously there's not much in the way of depth so it does get repetitive after a while, but it's good fun while it lasts.