Some people go absolutely crazy over motorsport, spending hundreds of pounds (or whatever currency they use) to travel around their country, even the world, following their favourite cars or drivers. I'm only what you'd call a casual fan myself, but even if you have no interest in the sport whatsoever, there are certain cars that stick in your mind. It may be through their glory on the track that they become well known to you, it may simply be for a distinctive colour-scheme. The reason isn't enormously important I suppose, but as far as I'm concerned, these are the five racing cars that I consider to be the most iconic:

This one is from before my time so it says a lot that it's such a familiar sight to me. It was designed by Ford for the express purpose of ending Ferrari's dominance at the Le Mans 24 Hour race. This determination supposedly stemmed from Ford's attempt to buy Ferrari in the early 60's; an attempt which Enzo Ferrari ended at the last minute, wasting millions of Ford's dollars. Whatever the reason, it was a mightily impressive car! The GT40, so called as the roof lies a mere 40 inches from the ground, was certainly very distinctive in appearance, especially with the colour scheme below. It went through several iterations during its lifetime. Being American, all of them did of course come with a monstrous V8 engine, and all of them were successful too. By the time it was retired in '69 it had won the Le Mans race four years in a row... 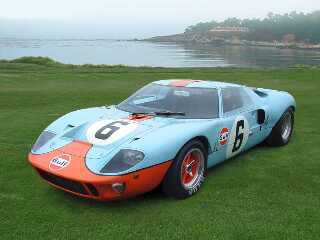 Like many I suspect, a majority of my sightings of this car have come as a result of playing a certain rally game by Sega! The eye-catching Martini livery is certainly memorable, both in the game and in real life, but it's definitely not the only noteworthy thing about this great car. The road version of the Delta wasn't anything special but Lancia are second only to Citröen for World Rally Championship wins and that is mostly thanks to various versions of the Delta. In fact, a new version of the Delta was introduced in 2008 so perhaps we'll see that Martini colour scheme again soon. Maybe it can even end the current dominance of Citröen... 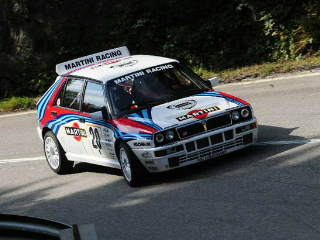 Developed as a replacement for the 956 which had just been banned for safety reasons, the 962 was a sports-prototype created for competitions like the Le Mans 24 Hour race. It was immediately successful and took over Porsche's amazing run at Le Mans by winning the competition for their sixth and seventh successive years. There are many versions of it run by many companies but it's always been the red and yellow Shell car that has stuck in my mind. Whatever colours it's racing in, though, it has proved a remarkably long-lived car, continuing to race successfully years after production of it ended. Some creative (and rich) enthusiasts have even adapted it for road use! 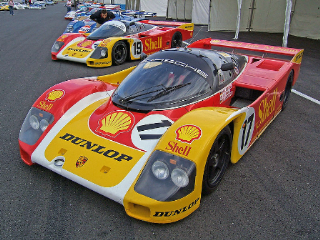 The Impreza is well known for many reasons. Along with Mitsubishi's Evo cars, it has proved popular among boy-racers as a reasonably affordable sports saloon, and a lot of power can be wrung from its flat-4 Boxer engine. In fact, the popularity of its various road versions have almost eclipsed what made it famous to start with. That is, once again, the World Rally Championship! It may not be among the most successful rally cars of all-time but its lovely blue colour along with the gold Subaru logo emblazoned along its sides, along with the comparative lack of sponsors plastered all over it, do help to make it one of the most distinctive. The design is so popular it can even be found on many of the road-going versions. 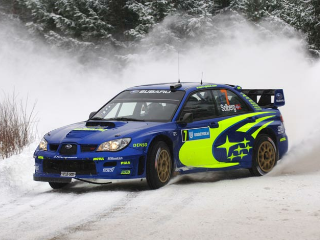 Yes, there's been lots of memorable and distinctive looking Formula 1 cars - the black and gold Lotus, the multi-coloured Benettons, the Rothman's Williams, but for many years when I was younger, the design of this McLaren was F1! Of course I didn't realise it at the time but it turns out the colours are that of Malboro cigarettes rather than anything specific to McLaren, but they carried the colours for a good few years and on many of their cars, from the first car of the range - the MP4/1, right up until the MP4/11. McLaren enjoyed one of the most successful runs in their history while sporting the Marlboro design too. I'm sure it didn't hurt that they had some rather famous drivers too, in the form of Ayrton Senna, Alain Prost, and Gerhard Berger, so the design certainly got a lot of exposure. I remember being sad when it was replaced - I initially thought that McLaren had pulled out of F1 altogether. "Where's the red and white cars?" I cried! It turned out that they were now a rather less appealing grey and black after ending their 23-year long association with one cigarette company, replacing them with another, but then I discovered the colours once again, being used by Penske Racing, an Indycar team in the US! It wasn't the same though, and I miss the red and white McLarens... 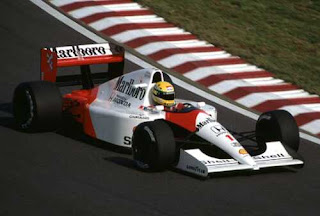