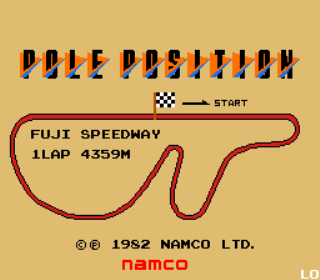 Emulation is great but it's not always easy. I've been trying to get a different arcade racing game working in MAME for a while now but despite the assistance of a helpful Facebook friend, I'm still unable to play it. So in the meantime I thought I'd take a quick look at this old classic. I say 'quick' because it's a very well know game already, and I say 'look' because it's yet another old classic that I missed out on! It doesn't always seem like it actually, I've been hearing about it all my life so I know how well regarded it is but I've never had the opportunity to play it. Well, not this arcade version, anyway, any it is the version that took the world by storm, making 'into the screen' racing games popular in the process. So, how does it hold up today, and to a first-time player no less? 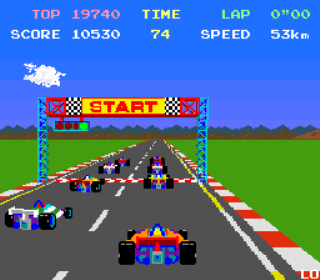 Well, it's a Formula One-based game, I guess the clue for that is in the title! There's just the one track on offer here which can be seen on the title screen. After inserting some virtual ten pence coins I was surprised to hear some speech! It was in Japanese so I've no idea what it said but it was impressive all the same. After that, we're off. At first I though that was it but it turns out you have to actually qualify for the race, and this took me a few tries to discover. Here, the cars are more than just the obstacles I initially though them to be as you're racing for position now too, and there are a few hazardous pools of water on the track too. There are a few billboards at the side of the track which of course cause your car to explode in a ball of flame should you hit any of them, and the same will happen if you hit any other cars. Surprisingly, in an early use of product-placement, they all feature well-known brands too. I always crash into the stupid bloody Pepsi sign inconveniently placed on the sharpest corner! 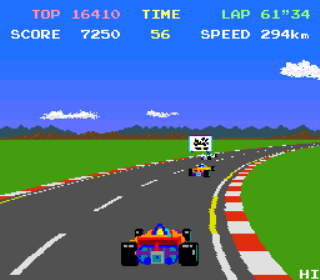 Aside from the occasional advertisement though, the track-side and landscape are quite plain, and the sound is very minimal (although it does have that brief speech I mentioned), but the cars are very colourful and, in the second of the two gears, the sensation of speed is impressive for its age. The existence of only one course is somewhat restrictive to its long-term appeal, of course, but it's hard to complain considering how old it is, and it's good fun. The difficulty of the course is well-graded. Obviously it takes some learning and it features some testing corners, but the car moves around it pretty smoothly. I can certainly see why this was such a popular game in its day. Obviously it was overshadowed by flashier efforts not too long after its release, and there have been countless sequels and updates since then, but this original is still enjoyable now and then and it's not aged anywhere nearly as badly as I had previously guessed. Now I'll have to take a look at Pole Position II to see how Namco improved it... or not!