Back at the very beginning of the 90's, I was a very proud MegaDrive owner. It was the newest and most powerful console ever at that point and I was happy to point this out to anyone who cared enough to listen, and indeed many who couldn't care less. I was in this privileged position for only a short while, however, when I started seeing reports of a new console by some company called SNK. Who the hell were they? Ohhh yeah, now I think about it, weren't they the company behind a few arcade hits like Vanguard and Ikari Warriors? Very impressive, but releasing a few arcade games is one thing, releasing an entire home console system is another thing entirely. I thought the days when any old upstart could (or rather, would) release a new format were long gone, and here was this medium-sized arcade company throwing their hat in the ring. They couldn't possibly pull it off, could they? 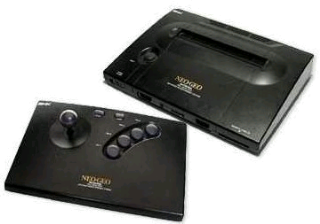 It turned out that they meant business! In the kind of move that would make or break the company, they first released their flashy new hardware in the arcades with the MVS (Multi Video System) which was an arcade machine built to a standard configuration and which could be fitted with up to six different games. Following swiftly on from this was the AES (Advanced Entertainment System), the immense home console version of the arcade hardware. The hardware was based on a Motorola 68000 CPU and a Zilog Z80 co-processor which was the same as that used by the MegaDrive. SNK's machine, however, was packed with lots of custom chips which gave it a lot more power than Sega's machine, or indeed some of the consoles that came after it. The games released for the system was direct ports of their arcade counterparts. If any proof was needed of their authenticity, it was possible to buy a memory card, use it at home, save your position in a game, take the memory card to your local arcade, and continue playing there. Impressive stuff!

Sounds like it was too good to be true. Well, there was two drawbacks to the system. Firstly, by its very nature it only featured conversions of SNK's own arcade games. No ports from other company's games here! The other drawback was the the enormous price of both the console and its games. Each release cost well over £100 with some games costing more than double that. Clearly this was a serious console for serious gamers. The Neo Geo quickly gained a cult following which led to its reputation for being the 'true hardcore gamers machine'. This reputation, of course, mainly comes from the assumption that only truly dedicated gamers would yield to the high price-point of the games, but it's also a reputation earned because of the games themselves which were generally very tough, but of a consistently high quality.

That's enough history though, on to the point of this post. I personally have never had the kind of money that would allow me to become a Neo Geo owner so I haven't played many of the games found on the system. Due to the huge size of the cartridges the system used, its games got ever larger and more impressive. For this post, however, I'll focus on the first few games released for it to see if they really were better than those available on my beloved MegaDrive. 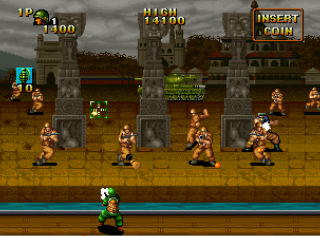 I thought I'd start with this game which was apparently the first ever game released on the Neo Geo hardware. It's also a game I'm reasonably familiar with having given it a bash in its splendid two-player mode with my good friend Luke many years ago. Returning to it now, I'm pleased to see it's not aged much. Using the backdrop of the titular war, NAM-1975 is a 'shooting gallery' type game similar to Operation Wolf, but is played from a third-person viewpoint rather than first-person one more familiar to fans of Taito's classic. There's a canal or river or something that separates the hordes of enemy troops from your players who can run left and right along the bottom of the screen while shooting and lobbing their grenades but it's still a damn tough game. It's also great fun though, especially when played with a friend, and was a promising start for SNK's new hardware. 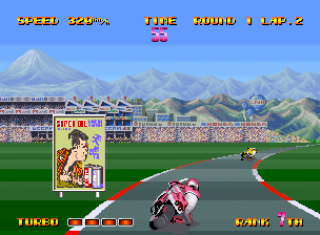 Now this is a rarity - an into-the-screen racing game! I suppose it wouldn't have seemed so special in its day as it was also one of the first games released on the system but, oddly, no other games of this type would see the light of day on the Neo Geo as far as I know. It's therefore a great shame that the clots didn't make their sole effort a good one! It's a motorcycle racing game very much in the vein of Hang On which probably looks pretty good from screenshots. The graphics and sound aren't too bad and the presentation is great, but the game's main problem is a big one - the AI here overwhelmingly favours the CPU riders. I know this is the case with many racing games, especially older ones, but it's particularly annoying here. Your opponents are faster, more manoeuvrable, never crash, and cause you to crash often. An extremely frustrating game which made me very angry. Grrrr! 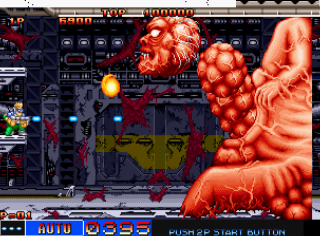 I've heard the name of this one a few times but I didn't really know much about it until now. My first impressions of it, however, were great! It's a run 'n' gunner and appears to be the precursor of the celebrated Metal Slug series. The story involves a malfunctioning military computer and an out-of-control army of cyborg soldiers or some such nonsense but the important thing is, it's good! It features several stages of multi-tiered side-scrolling landscapes teeming with lots of different enemies, mid-bosses, and of course ending with giant bosses, and there's some great weapons to shoot them all with. It's not without its faults but Cyber-Lip is an addictive and nicely-paced blastathon which I really enjoyed. 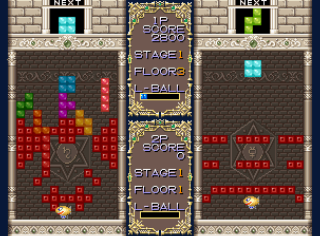 I suppose even the mightiest console needs a Tetris clone and this one is so close to the Russian classic, it might as well have carried the name! The only real innovation here is that each stage features a balloon-like character which is trapped beneath an existing arrangement of blocks. Your job is to remove a sufficient number of blocks to allow it to escape and float away. Despite this and a few other quirky features, it's not as great as the original, but it's still enjoyable and does provide a nice break from the hyper fighting and shooting games that dominate the Neo Geo library. That said, it is surprisingly unflashy for a game born in the arcades, even if it is a puzzle game, and could quite comfortably be duplicated on my MegaDrive. 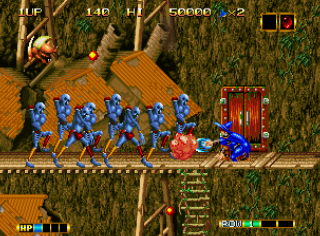 I remember playing this one briefly in its native environment and it's always lingered in the back of my mind as a game I'd love to own the home version of. Playing it again now reminds me why! It's a bit rough around the edges in some areas - the animation of the main character for one thing - but aside from that it's one of the best looking of the 'first generation' games with some nice colours and lovely backgrounds, and the music is great too. Gameplay-wise, like many arcade games it's tough going, but the platform 'n' ladder stages are nicely varied and the protagonist's ability to change into other forms with different abilities mixes things up well. My long-held affection for this title has been justified!

The Neo Geo launch line-up is often cited as being one of the best and these five games certainly don't harm that stance! A nice mix of genres and, aside from Riding Hero, all at least pretty good! The next part of this post will feature five more of the earliest releases for this Leviathan of a console. Who knows, I might even get around to looking at an example of the one-on-one fighting games that the system became so famous for! Stay tuned! :)

Exploring the Neo Geo Part 2
Posted by RetroKingSimon at 17:39