As an avid fan of arcade games it's inevitable I'll have played some Neo Geo games at some point. I did, however, miss out on many of the system's earliest releases owing to my allegiance to Sega's magnificent MegaDrive which was of course ousted as the most powerful home console by SNK's powerhouse (as well as arguably the SNES but that's a topic for another time). Still, time heals all wounds as they say, and here is where I've been taking a look at some of the very earliest games that were released on the Neo Geo hardware to see if they really were better than those available on my beloved MD. Four of the first five I looked at in 'Part 1' were decent enough and now I'll take a look at another five, including: 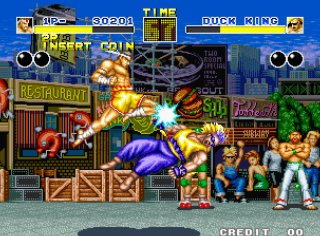 One-on-one fighting games are arguably what the Neo Geo brand is best known for so it's a wonder it's taken me this long to finally play one! Well, I've played a few before but this is still a first for Red Parsley! I believe this is one of the cheapest AES carts around and that's presumably because it's sequels are so much better, but I still enjoyed this original. I was surprised to find that only three characters are selectable but it still plays well enough in the same sort of way as the original Street Fighter 2 does compared to later games. The graphics and music are quite nice with each fighter's stage fairly memorable. The room for improvement is clear to see but it's a good start for the series and least it actually is one-on-one, unlike those stupid tag battles that tarnish many of the later incarnations. The absence of Mai is hard to get used to though... 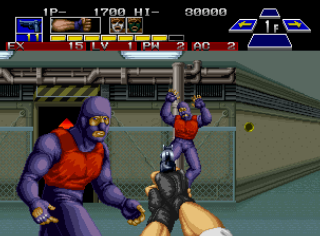 Another 'shooting gallery' type game. There's actually a surprising amount of these for the Neo Geo and, unlike the first one, this effort is viewed from the eyes of a CIA agent who has to take out masked hordes of terrorists who occupy office blocks, warehouses, and various installations. He has the choice of several means of attack, from his fists/feet to a knife and of course a gun, and they don't offer a bad selection of moves considering the rather restrictive interface. The presentation isn't the greatest but it is very arcadey and there's some decent speech too. Unfortunately I just didn't enjoy this one much. It seemed a bit random as to whether my attacks landed or not and playing it just seemed like a bit of a chore. This kind of game is rarely much cop without a light-gun though I suppose which is an accessory the Neo Geo would've been great for, surely? 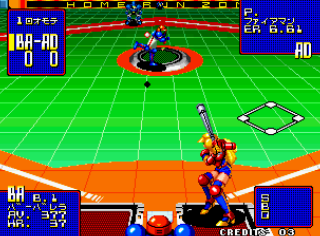 Ah, you Americans have made some great and not-so-great contributions to the world but I've never understood the popularity of baseball. I've even tried to like it but I just couldn't manage it. This game is set in the future though. Could it look at the sport from a more 'explosive' viewpoint? Well it certainly looks more interesting. There's several teams to choose from including ones with robots and female players (buxom, scantily-clad babes, of course) and the field has been overlaid with a grid. The lively sound effects and speech help create a decent atmosphere too and the rules (which I'm not totally familiar with) are simplified, albeit slightly altered too, presumably as a result of the futuristic setting. To my surprise this is actually rather enjoyable and, although it was also converted to the MegaDrive, it will be this version I return to. 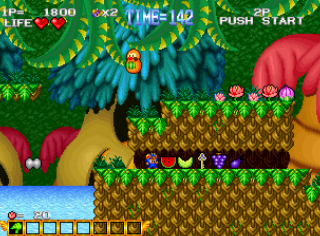 Wow, another real rarity - a Neo Geo platform game! Every console needs at least one good one though, so does this one fall into that category? It's certainly not the most original game of its type, borrowing visual styles and gameplay ideas from some other games, but there's no denying that it wraps them all up in a pretty splendid adventure. The graphics and sound, while fairly typical of this cutesy style of game, are delightful. It's all happy and colourful with really nice backgrounds, amusing sprites, catchy music and great effects. The gameplay is also up to the same high standard with nicely-designed stages, secrets, and lots to collect. For reasons I'm unable to fathom this game has always been looked down on, but under-appreciated or not, it's great fun and a nice change of pace. Perhaps my favourite game yet! 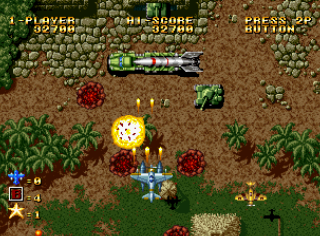 Aside from the masses of one-on-one fighting games it's perhaps shmups that the Neo Geo is next best known for and this was the first one. It's not remotely original, clearly 'influenced' by such classics as Flying Shark and Capcom's 194x series, but as we know well, that doesn't necessarily make it pants. It looks really nice for one thing. It may be set over the usual jungles and rivers but the backdrops are superbly drawn and the attention to detail is great as well. One problem I've heard is that it's too hard but I didn't find it too bad and it supports two-player action too. I suspect I'll find a better vertical-scroller on SNK's mighty hardware but this one is perfectly enjoyable and addictive for now!

Verdict:
The Neo Geo, huh? The very utterance of the name makes gamers of a certain disposition snap to attention, such is the respect it still commands. It certainly is a legendary system for sure and it's a status the machine earned quickly. It was a remarkably long-lived console too, still receiving full retail releases over ten years after its launch. This is partly down to the fact that it was a rather powerful machine, and that is evident even with these very earliest of releases.

Whilst most of them are of a similar style to the games I had on my MegaDrive, the quality here is noticeably higher, at least from a technical standpoint. Whilst Sega's machine could (and in some cases, did) have a good stab at some Neo Geo conversions, they were never as impressive as they are here. Arcade games, more often than not, always had a certain air about them, an aura or sheen that just couldn't be replicated on home consoles, but the Neo Geo saw the end of this, simply because its games were arcade games, the PCB's quite literally transferred from arcade cabinets to the large cartridges the Neo Geo used.

This complete dominance of the arcade world over this console did of course have some disadvantages too. Almost all of the games were short, sharp, adrenaline rush experiences, battering your senses for the ten minutes or so that you would last, and there's certainly nothing like RPG's or strategy games to be found in the system's software library. What is here, however - fighting games, platformers, shmups, run 'n' gunners, etc - is of such a consistently high standard that using the console really is a unique experience.

However, considering the immense cost of both the hardware and software in its earlier years combined with the console's complete lack of 3D abilities in its latter years, it was only ever going to be a niche system appealing to so-called 'hardcore gamers'. Indeed, it would've been completely impractical for a teenager such as myself to have a Neo Geo as a sole console, but if I'd had super-rich/irresponsible parents, good lord it would've been.... awesome!

Exploring the Neo Geo Part 1
Posted by RetroKingSimon at 14:19