It's been around for a long time now but the Mafia, Cosa Nostra, Mob... whatever you want to call it, is still a fascinating subject to most of us. Of course, the closest a vast majority will get to it is through the films, TV shows, books, etc, offered by some talented individuals. Some of these are fact, some are fiction, but most are a mixture of both. Regardless of their accuracy, the subject is one which is both entertaining and tantalising. After all, not many of us enjoy being "an average nobody and having to live their lives like a schnook". There have been many superb films on the subject but these are my personal favourites. Incidentally, if anyone else has others in mind, let me know. Maybe I haven't seen them! 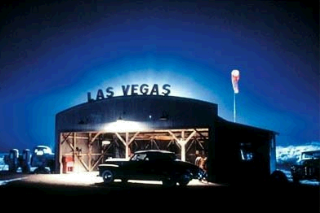 This is the film I've seen most recently out of the five on this list and it was one I enjoyed a lot. As is often the case, it's based on a true story and follows the story of New York mobster, Bugsy Siegel (Warren Beatty), and his attempt to transform Las Vegas from a dusty little town into the 'Entertainment Capital of the World' that we now know (and love?). Of course, it takes some sizeable liberties, including the omission altogether of the man most responsible for setting everything in motion, but it's still a superbly scripted film with great performances by Beatty, Annette Bening, Harvey Keitel, Ben Kingsley, and lots of others. There's not as much killing or racketeering as many other films of the type so even the missus might enjoy Bugsy! 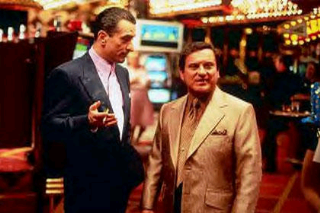 Another Vegas-inspired tale and one which sees De Niro and Scorsese teaming up yet again. This time the city is already the bustling neon-drenched Sin City familiar to us all by the time we're introduced to top gambling handicapper, Sam 'Ace' Rothstein (De Niro), who's asked by organised crime associates to run the Tangiers casino for them. With Sam's natural money-making talents and his boyhood friend, Nicky Santoro (Joe Pesci) watching his back, they're soon raking it in. However, as the film's tagline says, no one stays at the top forever! Featuring a superb, eye-opening script and some fantastic acting, especially from Pesci, as psychotic as ever, and a career-best turn from Sharon Stone as Sam's alcoholic wife, Casino is as epic (not to mention violent) as they come! 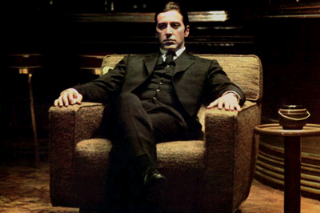 This first film or the second? They're both thoroughly engrossing films without question, but the original just edges it for me. Embarrassingly, I didn't actually see it until a few years ago at the insistence of my good friend, Luke. It's the only film on this list that isn't at least based on a true story, and it does take a while to get going, but the impact it leaves behind is immense and I'm now very grateful to Luke for making me watch it! It features career-defining performances from several top actors and some glorious set-pieces. I'm sure many would place this classic in the number one spot and I can understand that - it is a magnificent display of film-making and story-telling, after all. 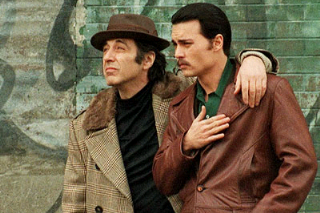 The most recent film on the list and another true story which is perhaps the most accurately portrayed 'true story' of all Mafia films. No doubt the FBI tried on many occasions to infiltrate the Mob and this film tells the tale of their most fruitful attempt. Starring a superb Johnny Depp as Joe Pistone (undercover codename - Donnie Brasco) and an even superber Al Pacino as ageing mob soldier, Lefty, who takes Donnie under his wing, the film depicts a way of life far from the glamour and riches that many others portray, but it's still an immensely entertaining film with lots of memorable scenes and dialogue which does a fantastic job of conveying the pressures and temptations of undercover work. 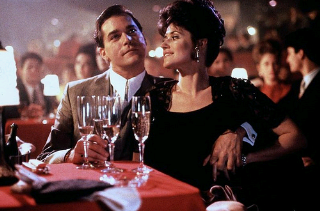 Talking of glamour and riches, that's exactly what this classic film portrays Mafia life as. It follows the life of Henry Hill from young teenage kid up to his middle-aged years, and what a life it appears to have been! Hill, played by Ray Liotta, dreamed of being a gangster from a young age and he doesn't have to try to hard to become one - he soons finds himself part of Paulie's crew pulling off cons and robberies left, right, and centre. Of course, there are some lows and well as the many highs but this is a magnificently directed, scripted, and acted film with top-drawer efforts from Scorsese, Liotta, De Niro, and the amusingly crazy Joe Pesci. Seldom has gangster life looked so intoxicatingly appealing.
Posted by RetroKingSimon at 18:32