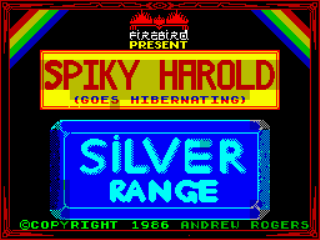 He may have been a household name for many years now but Sonic wasn't the first hedgehog to star in his own game. Take this fairly well-known budget classic for example, which was released on the 'big three' 8-bit micros some five years before the blue blur first appeared. Harold is a much more traditional hedgehog than Sonic ever was though, for instead of taking on evil dictators and destroying machines of war, Harold is instead more occupied with gathering food for his winter hibernation. It is this vital survival process that forms the premise behind his game which takes the form of a flick-screen adventure where you must simply help Harold collect enough food to hibernate in peace and comfort. This is, however, easier said than done as you probably guessed! 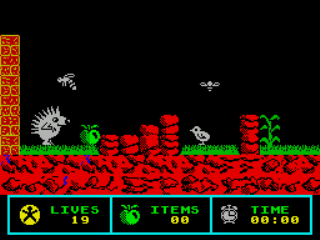 Harold's potential winter pantry is spread over fifty-seven screens, each of which contain one foodstuff. Most of the screens are in caverns beneath the hedgerow which can get quite cramped. There's also an abundance of unpleasant creatures such as wasps, bats, snails, etc, and other hazards trying to stop him. Actually, they're not really, they're just going about their business I think, but they're usually in Harold's way and sure enough, contact with any of them will cost him a life and return him to the point of entry. He may also come across an occasional coin which will give him an extra life and, curiously, a glass of wine which makes him drunk, or in other words, reverses the directions on the joystick for a short while. Not really sure what the point is but still! 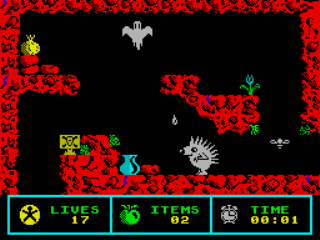 Just about the only think I really knew about this game before playing it for this feature (other than the fact it featured a hedgehog, of course) it that it's uncompromisingly difficult, and this has not proven to be an exaggeration! You may start the game with a surprisingly generous quota of lives but you'll soon start to lose them. Control of Harold is pretty good and the collision-detection is great, but the gameplay requires pixel perfect accuracy so some screens take many lives to pass. This was of course common in games like this but many of Harold´s screens are particularly difficult to cross due to the movement of the enemies, not to mention the size of Harold himself. The graphics are quite nice though and feature no colour-clash and if you've got the patience to stick with it (and turn the awful sound down), Harold's quest is a pretty enjoyable one, but it may be too frustrating for most.