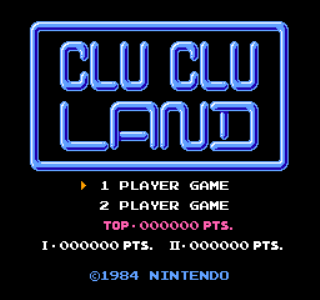 For many years now, I've been highly intrigued by this game whilst simultaneously knowing almost nothing about it. I'm quite sure that it's the unusual name that grabbed my attention but perhaps it's time to learn some more about it. My first attempt yielded little of note so it's time to do some checking. Returning, armed with the necessary details, I have more luck and it turns out that the name isn't the only unique thing about Clu Clu Land. For those as clueless as me, it's an action/puzzle game starring a bubble fish called... umm, Bubbles. This creatively-named orange blob, who doesn't actually look much like a fish, must make her way through twenty single-screen stages spread over five levels which don't appear to be submerged in water. Each stage is timed, viewed from overhead, and features a grid-like layout. Nothing too strange there, you might think, and you'd be correct. 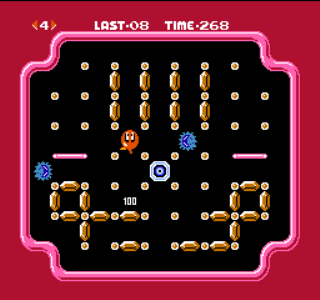 Each stage, however, is filled with what looks like dots. It turns out that these are poles and in order to make her way around each stage, Bubbles must grab a pole with one of her hands (another classic fish attribute) and swing round it to change direction. Her reason for doing so is to recover the many gold bricks that were stolen by a group of nefarious sea urchins called the Unira. These gold bricks have apparently been arranged by the Unira to create a particlar shape on each stage, but each brick will only appear once Bubbles passes between the two corresponding poles. To complete each stage she must reveal the entire shape which is random each time you play. Of course, the Unira aren't just sitting idly by watching her ruin their work - there are at least two of them patrolling each stage and contact with them results in the loss of a life. Bubbles can temporarily stun them with her sonar wave and push them into walls to eliminate them. 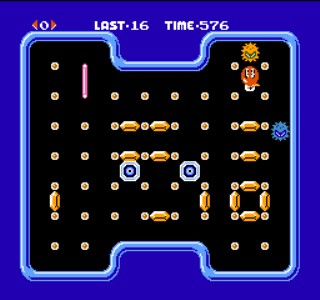 Replacement Unira's soon emerge from the 'black hole' though, one or more of which are present on each stage. Unlike the Unira, Bubbles can't withstand the crushing gravity of these quantum singularities. The only collectibles are fruits and bags of cash which can be collected for points and clocks which freeze the Unira for a short while so, like most mazey puzzley games, things are kept nice and simple. As you advance through the stages, things do get a little more complex though. The number of black holes increases and some stages require the gold bricks to be passed over twice before they are revealed, and there is also an increasing number of elastic bands between posts which spring Bubbles back the way she came. It remains a simple game to play though, and is great for high-scores. There's an occasional bonus round and bonus points are awarded at the end of each stage for time remaining, Unira's crushed, and gold bricks revealed (which seems a bit pointless since you have to reveal all of them on each stage in order to finish it!). 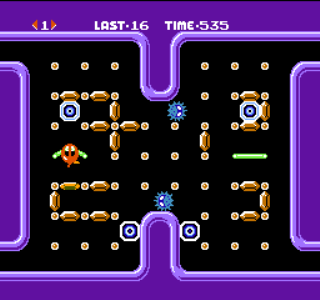 Much like Ice Climber which I also took a look at recently, Clu Clu Land was a very early release for the Famicom and NES, but unlike its platforming counterpart it's aged pretty well. Its graphics are also basic, perhaps even more so. The shape of the 'arenas' and the colour of their surroundings change now and then but that's about the only variety and, while the music and sound effects are quite good, there's also little variety there. I suppose you could say the same about the game generally but its original and addictive gamplay, not to mention the random element of the stages, means it rarely gets tiresome. The controls take a bit of getting used to since Bubbles has to grab the poles with her hands rather than simply turn in another direction, which means you need to press the desired direction slightly earlier. Once you grown accustomed to this though, the game is great fun. It may borrow from a couple of other games but it at least does something interesting and it definitely adds a lot of its own ideas. The result is a unique and refreshing game which I'm very glad I finally tried.