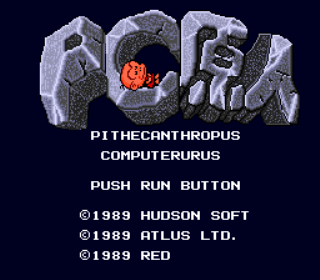 I suppose I can only cover PC Engine platform games here for so long before I get to this famous rock-head who rose to prominence as the mascot for NEC's mighty console, but he actually started life as a comic character in a Japanese games magazine. His popularity swiftly enabled his promotion though, and the result has come to be known by a good few names including PC Genjin (this Engine version), Bonk (American TurboGrafx versions), BC Kid (Amiga), FC Genjin (Famicom), GC Genjin (Japanese Game Boy release) and so on. However, the name I was always most fond of was perhaps the only combination of letters known to man that wasn't an official name - PC Kid! This is the nickname the Japanese games received, at least here in the UK, and it's the only name I've really known the slap-head by, but his series of games is one that I'm ashamed to have never properly played. Until now. 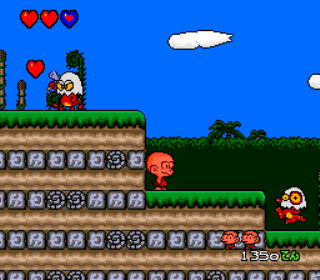 Before the days of Red Parsley, the bulk of my PC Engine gaming had been shoot 'em up-related which inevitably caused me to miss out on games like this. I know, I only have myself to blame, and it's not like I wasn't aware of Pithecanthropus Computerus Kid (to use his full name) - a caveboy with a giant head is hardly the most inconspicuous character ever! Indeed, his game world is equally unusual, predominantly featuring a pre-historic theme, beating both Chuck Rock and Joe & Mac to the punch. The main bad guy is predictably a mean dinosaur. Specifically, he is called King Drool and he has kidnapped Princess Da, a small pink creature to whom PC Kid apparently feels some affinity. Standing between him and his epic battle with King Drool for the right to do... something... with Princess Da are five long levels set over punishing enemy-ridden landscapes. 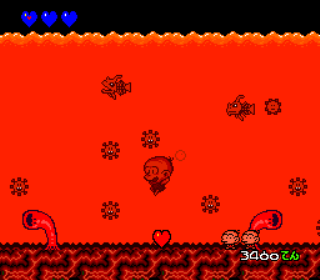 Most of the five rounds are divided into several stages, up to seven in fact, and they take in a wide variety of locales including various deserts, waterfalls, underground caverns, swamps, high up tree tops, icy and underwater areas, and a distinctly un-prehistoric looking castle. There are an impressive forty-eight different characters in total to be found through the game and a majority of these are of course enemies. Most of them are animals or dinosaurs of some sort and they all cause PC Kid to lose some of his energy, represented by hearts at the top of the screen, when they touch him. Many of them are appropriate to their surroundings too, such as lizards and cacti in the deserts, dragonflies and electrical fish in the tropical waterfalls, and strange bugs in the caverns. Of course, being a platformer, they are all taken out the same way - with PC Kid's enormous, shiny bonce! 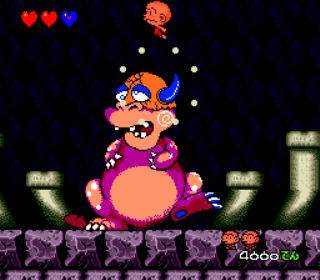 That's right, PC Kid's dispenser of justice is his own great big head! Using this indestructible body part he can 'bonk' the enemies (presumably from where the US name arose) into submission. Some are defeated by one strike, others by two or more, and the large bosses that await at the end of each round take many, but luckily he can also launch a more powerful head-first dive from mid-jump to cause more damage. The only power-ups available really are the chunks of meat found laying around periodically. Collecting one small meat gives PC Kid the ability to head-butt the ground and stun and nearby enemies. Collecting a second meat while already in possession of one will give him thirty seconds or so of invincibility, while collecting a large one will jump straight to the shield. 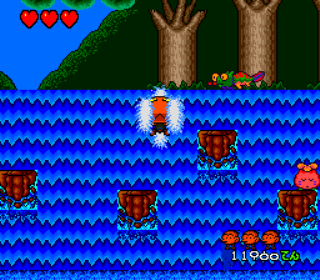 There's a few other collectibles around though. Most of these are various fruits which replace lost energy, smiley faces for points, and there's three types of hearts. Small or large red ones will also replace lost energy, with the amount varying accordingly, but the rarer blue heart will increase your total energy level by one heart. Despite the fairly small amount of power-ups, there's actually quite a bit of variety here. There's some secret areas leading to bonus stages where fruits or points can be earned, and the stages are filled with lots of features like moving platforms, collapsing bridges, quicksand, uprooting trees that carry you along, and three types of flowers which can be jumped on and act as springers. Some bounce you further than others while some reward you with fruits. Some of the stages are pretty tall too, and PC Kid can climb up walls and reach higher areas by biting the wall and inching his way up! 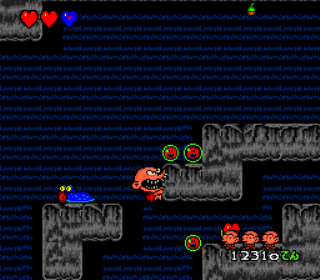 This was certainly an eye-catching game in its day, and even fairly original too. This is partly down to the game's healthy sense of humour which, as well as giving PC Kid lots of amusing facial expressions, also added some nice touches to brighten up the already enjoyable stages. For example, during the first round you'll come across a large sleeping dinosaur. If you manage to wake him up he'll open his mouth and seemingly eat you, but then the game continues in his interior! It's things like this that make PC Kid such a distinctive and appealing game. It's quite tough going for a cutesy platformer though, and rather large too, so it should last a long while, especially since the final stage ends with the kind of boss rush more usually associated with shoot 'em ups! As you may have seen, the game is also something of a looker. As well as its unique humour, it was also for it's supremely bright and colourful graphics that PC Kid first gained attention. 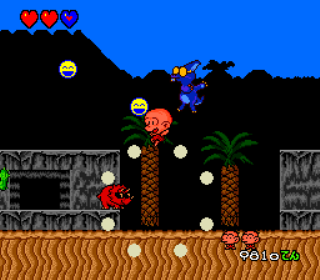 The music and sounds effects are surprisingly average for a game of this type, but those graphics really are superb. The detail in the backgrounds isn't amazing but the foreground graphics are detailed and the sprites are nicely animated and full of character. Of course, even graphics as nice as these wouldn't hold the attention for long, let alone spawn numerous sequels and remakes, if the game was annoying to play, so luckily it's not. Control of PC Kid is fine and, although there are a few frustrations here and there, it's mostly a very appealing and addictive game. It many ways it understandably plays like a bog-standard platform game of the era, but all the humorous and creative touches set it apart from the crowd. Plus, for that same reason you'll continue plugging away to see what awaits on the next stage, and the difficulty is paced in such a way that you won't get there too quickly, but you won't get annoyed and give up either. So, a top debut for Hudson's 'other' mascot, and I've got the sequels to look forward to yet!