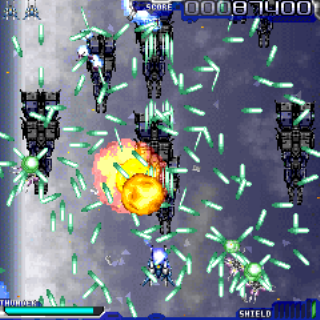 After recently dipping my toe into the previously untested waters of doujin shoot 'em ups, I was immediately recommended this game which, as it turns out, is not free like many games of this type. So, pending purchase of the full game (which is rather tricky to find as I understand it), I'll take a look at this two stage trial version, and first impressions are very good. It's a Japanese game and even the menus and everything are in Kanji but it's not difficult to work things out, and the presentation is great. The game itself is a 'bullet-hell' vertical scroller (as many doujin games are) and has a nice visual style, looking a little like a SNES game with lots of sprite-scaling going on, and at the same time also looking like a modern shmup with millions of bullets all over the screen, giant battleships moving around, and lots of flashy weapon effects. There are few power-ups as far as I can tell but your ship does have an awesome rechargeable 'thunder cannon'. The action isn't particularly original but it is hectic, relentless and, more importantly, well-designed, with nice music and graphics. I'm not sure how much this fine game costs but Kamui is as good as many full-release shmups I've played. Give it a try if you haven't already!