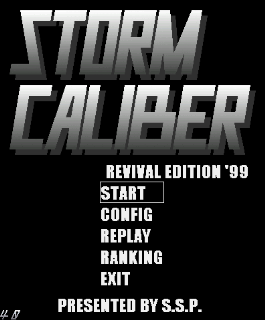 Hello and welcome to another new feature here at Red Parsley! I've been meaning to take a look at some 'doujin', or fan-made shmups for quite some time but it's not a scene I know a great deal about yet so please bear with me if you'd be so kind. But what made me start the feature now, you ask? Well, upon the recent acquisition of a new laptop, I was tidying up my existing PC to prepare for a back-up and transfer of data. I had a quick look in the 'games' folder, which I seldom venture into, and a folder called 'Storm Caliber' caught my eye. Strangely, I don't even remember putting it there but I gave it a try anyway. I didn't even realise it was a shoot 'em up at this point but it wasn't long before it had ensnared me. 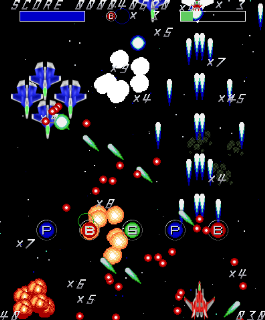 There's no back story that I can determine but that doesn't matter too much. After choosing between the two different attack craft that are initially available you get thrown straight into the vertically-scrolling action. The available craft are the usuals - the red 'balance type' ship is slower but with a greater range weapon, the blue 'speed type' ship is faster but lesser range weapons. Whichever you choose you are immediately thrust into the first of the seven stages that make up the game. Each takes place over the same star-field backdrop and are filled with masses of enemy ships. We're in 'bullet hell' territory here too so the screen is quickly filled with millions of enemy shots, some in patterns, others not. 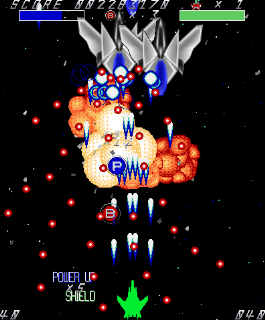 There are three types of enemy ships. The smallest and most numerous are downed by a single shot but there are also a surprising number of larger more powerful vessels too. The third type is of course the giant battleship that awaits you at the end of each stage. The two fighters are both armed with the same basic weapon but they deploy them slightly differently. The blue ship concentrates its fire forward while the red one covers more of the screen but with the resultant reduction in power. There are no other weapons to collect but the default one can be powered up by collecting the relevant icons and you can also add to your ship's meagre stockpile of bombs. These differ from ship to ship the same way. 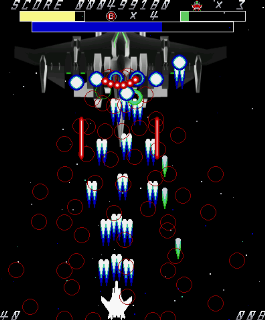 Regardless of ship, the bombs not only destroy most enemies, but also turn all bullets that are on the screen into collectible stars for bonus points! Your ship is offered a degree of protection by a shield, which can also be topped up, but in one of the game's most interesting features, you can also turn it into an offensive weapon. This is a very handy technique known as 'bullet grazing' which sees your ship channel a portion of its shield power into a defensive volley of homing missiles when it is grazed by an enemy bullet. Obviously you can only take advantage of this while you have shield energy and using it too much will leave your ship defenceless but the shots are pretty powerful so it's well worth using them as often as you can. 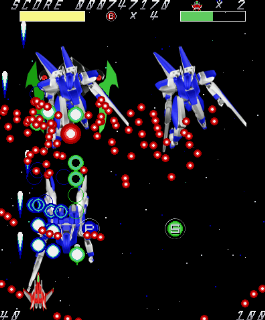 Like many doujin shmups, Storm Caliber is rather lacking in variety - the first three stages don't differ much to begin with but they are then repeated with tougher enemies for the next three stages before the final stage which is a very short one leading up to the final boss. It's also a surprisingly easy game for a game of the bullet-hell type which are notorious for being insanely hard (although it's still far from a walk-over). The graphics are pretty repetitive too - the starry backdrop is unchanged through the entire game and the sprites vary little from one stage to the next. None of this should suggest that we're in the presence of a bad game though, as the idea behind Storm Caliber is to amass as high a score as possible. 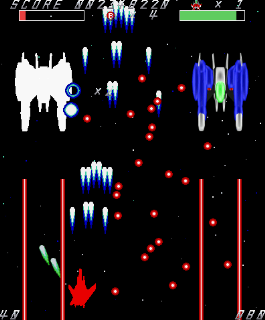 This is achieved by destroying enemies in quick succession to increase the score multiplier, and the best way to do this is to use the bullet-grazing technique. There's plenty of ways to keep increasing your best score and there's more to the game than it initially appears. Only three stages are available to start with, for example, and there's also a couple more ships hidden away too. Of course, good or bad, you'll only have any interest in this game if you're into shmups but there's a lot here for fans to like. The graphics, though repetitive, are crisp and fast-moving and there's no slow-down, even when the bullet-count gets ridiculous (although this may depend on your PC specs). The sound is even better with lots of loud sound effects and some fantastic music, and it's exciting, addictive, and enormous fun to play. With a bit more variety, especially graphically, this would rank among the most enjoyable vertical-scrollers I've played which is no mean feat for a free, homebrew game. There's certainly nothing to grumble about here though, and overall this is a cracking little game which I'm very happy I accidentally discovered!