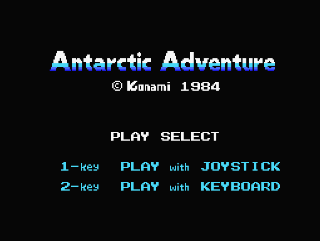 Okay, so it's not really a 'driving' game but this amusing little title does feature racing through its entirety. As you've probably already determined, however, it is not vehicle-based racing. No, the action here instead sees a fleet-footed penguin called Penta trying, for some reason, to circumvent our most southerly of continents by racing from one research station to the next. Penta went on to great fame, especially in Japan where he became Konami's mascot, and his first game is an interesting one. There are ten stages to challenge him, with the stations representing the various nations that lay claim to the icy continent, but the way between them is increasingly fraught with danger. The Antarctic is hardly the safest place in the world to begin with but the paths down which Penta must travel are littered with holes in the ice. 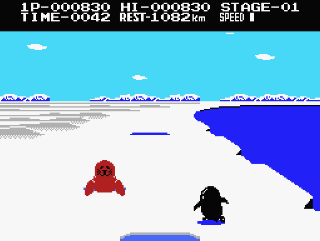 Luckily you can increase or decrease Penta's running speed at will and he is also able to jump holes, but that doesn't help him when one of the pesky sea lions pokes his head out of a hole! Contact with one of these pinnipeds or an ice hole will reduce Penta's speed back to zero (and jolt him around a little too) before allowing him to set off again. He can collect fish, which frequently come flying out of holes in the ice, and flags for bonus points, but there is a rather strict time limit too. If you manage to successfully guide Penta through all ten stages, the game will loop back to the beginning, so it seems the object here is very much the pursuit of high-scores! Is it worth dedicating that much time to though? Well, being an early MSX release, Antarctic Adventure is understandably a bit basic, and not just its presentation either. 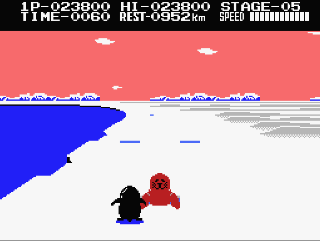 The sound is almost solely represented by a nice but solitary tune and the graphics aren't bad for their age. Penta is a very likeable fellow and amusing too as he waddles along flapping his stubby wings as he jumps! His game plays a lot like those old lane-changing LCD games and accordingly it's great fun but only in short bursts as it's very repetitive too. This is mainly down to the graphics which change very little from one stage to the next with the main difference merely being additional holes to avoid. The time limit is too strict as well - even on the first stage you pretty much have to run full-speed all the way and make very few mistakes. The running and jumping action is very pleasant and well-enough designed, it's just needed to be a little easier and more varied. Still, if you like the sound of it, give it a try. Then try the similar but more varied Pen Pen for the Dreamcast!