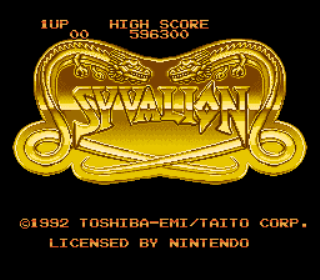 Considering how many shoot 'em ups have been made over the years, it's a little strange how few of them put you in control of anything other than a generic spaceship or plane/helicopter. One of the coolest alternatives must surely be a dragon and it's this mythical creature that takes centre stage here with Syvalion. Taito aren't the first to try it of course - Namco gave us the rock-hard Dragon Spirit a few years before and Jaleco offered the thoroughly delightful Saint Dragon too, and it is the latter that Syvalion is more similar to. This is primarily because they are both viewed from the side, as opposed to Namco's vertically-scrolling effort, and they also both feature a highly manoeuvrable metallic dragon (which I suppose defeats the object somewhat) but it's here that the similarities end. 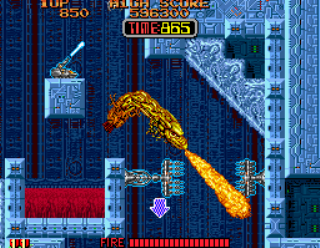 Aside from a typically uninspiring story involving a lone Human attempting to save the world from invading aliens, Syvalion is a rather unique shmup, and my first impressions of it were very good. Despite my average-at-best skill level I enjoy high-score challenges and this game gives one with its very first screen! After this you can choose between three play modes - Basic Series (practise mode), Combat Series (arcade mode), and Time Attack. The practise mode gives you tips as you play and familiarises you with control of your dragon and how to move it around the maze-like stages. One of the first noteworthy things is that the stages don't scroll automatically. Instead, they follow your dragon around at whatever speed and in whichever direction you move him. 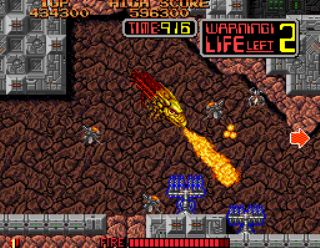 There are five stages in total, which are referred to as 'chapters'. Impressively, they are apparently completely random, although each is still preceded by text presented like diary or log entries which relay the story and the protagonist's progress. Although the stages do not scroll automatically, you do have a time limit in which the stage must be completed. The only requirement of this is to follow the helpful arrows toward the end of the stage and defeat the boss who awaits. The stages are also populated by lots of smaller enemies. Some of these are already there waiting, others appear from nowhere in front of you, behind you, even right on top of you (yep, it's really fair!). Most of them are easily killed by your dragon's fiery breath though, and release orange capsules when this happens. 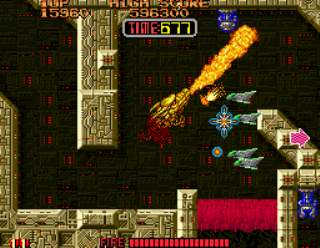 Most of the capsules merely give you extra points but some will top up Syvalion's invisible energy meter. There is also a temporary invincibility shield and a dragon-circling drone that you might find on the odd special occasion but overall this is a game largely devoid of power-ups. As well as the standard, weedy enemies, there are some others which are surrounded in 'blue shining varia' (a glowing aura of sorts) which can't be destroyed. Similarly, there are also lots of guns and other hazards attached to the scenery, and pretty much all of these are indestructible too. It's not all bad though, for while the dragon's fire cannot be used constantly (it, too, has a meter which recharges when it's not being used), it can destroy enemy bullets as well as the enemies themselves. 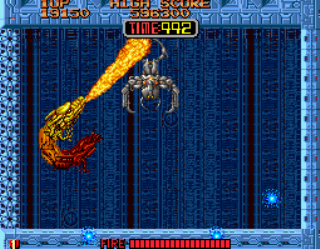 Overall though, this is a very tough game. I suppose it has to be considering its rather meagre length but unfortunately, rather than the enjoyable kind of challenge that makes you want to get better, it's the frustrating and annoying kind. There are several reasons for this. The fact that the graphics are rather average doesn't help matters. As mentioned earlier, the presentation is superb. The dragon also looks quite nice but the other sprites are small and not particularly distinctive or appealing. The backgrounds are worse still with little difference between chapters aside from a different pattern and colour scheme, and next to no variety, either in terms of sprites or scenery. The sounds effects are instantly forgettable too. The music is actually rather good but that's not enough to save the game from obscurity on this front at least. Of course, as we retro gamers know, fantastic graphics are nice but they're not essential to make an enjoyable game. 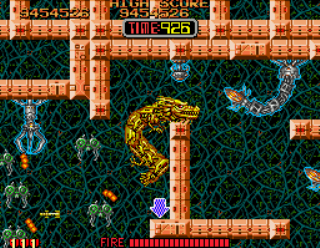 However, Syvalion sadly plays even worse than it looks. You only control the head of your dragon with the tail following behind, but all parts of it can be damaged. That means it's a good idea to take your time but there's also a time limit. This, along with the spontaneously appearing enemies and iffy collision-detection, means taking damage is inevitable, and with this comes frustration. It's a real shame too as there are some good ideas hidden away in here. The bonus score from collectible blobs increases for each one you collect successively without missing one, the Combat Series changes a few minor gameplay elements around depending on how well you're playing, and the random stages are superb. There would be a lot of reasons to like this game if it wasn't so annoying, and I wanted to like it too. Ultimately, however, Taito's innovative ideas were in vain.