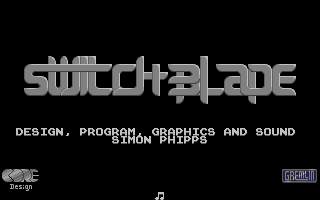 Whether you love or hate Rick Dangerous, there´s no question that it was a memorable game. Anyone wanting more of the same would have to wait for its sequel which would arrive a year later, but released the same year as Rick's first adventure was this game. It's similar in looks and gameplay so it comes as so surprise to find that the same team was responsible for both games, but the setting has changed. This latter effort takes place ten thousand years in the future rather than the recent past, and it appears to be an anime-influenced future 'cyber world' called Thraxx where the Undercity is now ruled by the evil Havoc who has shattered the Fireblade and filled the city with his minions. 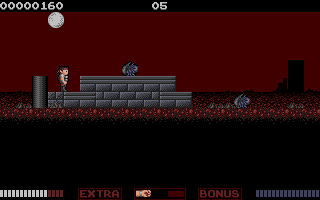 It's down to you to flush the Undercity of this filth and simultaneously find the sixteen pieces of the Fireblade, the source of the Bladeknight's power, and rebuild it to ensure lasting peace. You do this as Hiro, the last of the Bladeknights. He has as much stealth and cunning as you can muster as well as a programmable cyber-arm. Only when the Fireblade has been reassembled will you be able to take on Havoc and help Hiro gain revenge for the death of his people. You'll start this flick-screen adventure above ground but after only a few screens you'll enter the underground depths of Undercity, a vast, sprawling labyrinth of rooms, tunnels, and passageways. A labyrinth it is too as only sections you're in or have previously been in will appear - all other sections are hidden until you enter them. 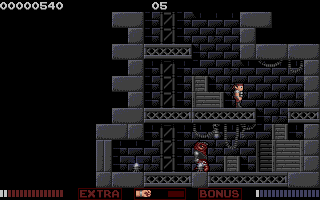 This of course means there's lots of secrets and sneakily-concealed areas which often require some exploration or experimentation to find. Hidden or not though, all areas of Undercity are patrolled by the hideous servants of Havoc, contact with whom will deplete Hiro's energy meter. To begin with he can only use his fists or feet against them but there are six power-up weapons available as he makes his way through the game which are mostly sword or projectile-type weapons. They will all have differing ranges and some projectile weapons also have limited ammo. The effect of some of them (including Hiro's default attacks) is also slightly different depending on your use of the charge bar. More ammo can be collected of course, and other things to look out for include speed-ups, a temporary shield, flasks and orbs which award you with bonus points, and increases to your power-meter. 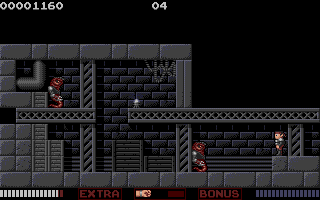 It's also worth looking out for Fireblade fragments, of course, and successful recovery of all sixteen pieces bestows a sizeable bonus upon Hiro as well as the option of using the Fireblade as a seventh weapon power-up. It will be a while before that becomes possible though as Switchblade is a pretty big game. It consists of five levels but, although ending with a boss fight, each level continues on from the last so there's no real break between them. This extends to the look of them. The graphical style is similar to the distinctive look of Rick Dangerous before it - everything is neat and nicely drawn with small, squat little sprites, and I can't imagine it really pushes the 16-bit CPU of the ST very hard - but unlike Core's previous game, there's almost no variety between the levels, and unfortunately that's as far as both graphics and gameplay are concerned too. 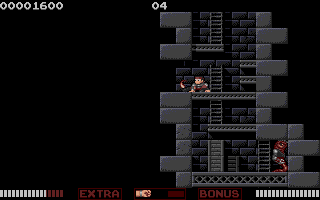 The grey bricks, crates, girders and ladders that you'll first see upon entering Undercity are still prevalent an hour later as you approach the climax of the game. This was very disappointing to find as even the much shorter Rick Dangerous has some variety between its levels, graphically. One improvement made here is the audio - the sound effects are pretty anonymous but there is at least in-game music courtesy of Ben Daglish, and it's great! Playing the game will also feel familiar if you've played Rick's game. There's less trial-and-error frustration involved here, at least with regards to completely hidden traps and the like, but exploring the levels is done in pretty much the same way - jumping around multi-tiered sections and nipping up and down ladders. Hiro also moves in a similar way to Rick but since he has an energy meter rather than one-hit deaths, it's a little easier too. 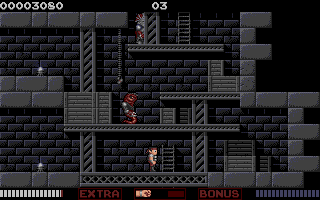 Overall though, I'm not sure if Switchblade represents a forward or backwards step. Rick Dangerous got a mixed response due to its immensely unfair but addictive gameplay while Switchblade was apparently unanimously praised, but in my opinion the latter doesn't possess either of the former's most notable qualities - it's fairer but less addictive since the whole game is pretty much the same as the first five minutes. I know it suits the story to have the whole city looking pretty much the same, but it doesn't do much for the player's desire to see it all. This, combined with a very annoying 'hit mechanic', which sees Hiro shunted backwards every time he takes damage, means I have less compulsion to continue playing this than I do Rick Dangerous. It's far from a terrible game, and uncovering all the hidden areas provides some motivation to play it, but it could've been so much better with a bit of variety.