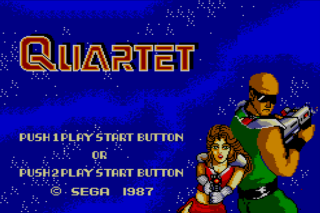 In the late 80's when I was a proud owner of a Master System I only had a handful of games but I was immensely fond of them. Inevitably though, there were others I used to see in magazines that intrigued me and one of them was Quartet. So little did I know about it that, even until recently, I thought it was a platformer, but once again my humble little blog does its job and rights another of my oversights! Like many early Master System titles, this one was originally an arcade release which was released the previous year as a game that could be played by four players simultaneously. Finally getting around to playing this conversion, which supports only two players, reveals that, while it is a game that features some platforms, and you can walk on them, it's actually more of a shmup than a platformer. 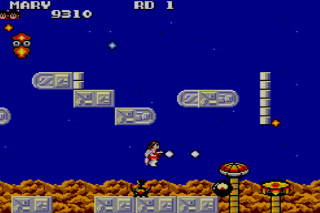 I suppose some shooting of some sort is usually required to get rid of pesky aliens and sure enough, your goal here is to rid 'space colony Number Nine' of the 'vile parasites' that have infected it! Of the four selectable characters from the arcade game, only Mary and Edgar make the cut here with players one and two taking control of them respectively. To begin with you guide them across the landscapes run 'n' gun style, jumping and shooting the endlessly spawning enemies as you go. Most of them leave items behind which you can collect for bonus points but there is one item in particular you should look out for. Located somewhere in each of the six rounds is a jet-pack and after grabbing this the game turns into a side-viewed shmup! Whether running or flying, however, the objective remains the same - defeat the boss at the end of each round to unlock the exit to the next before ultimately reclaiming Queen Cynthia's casket! 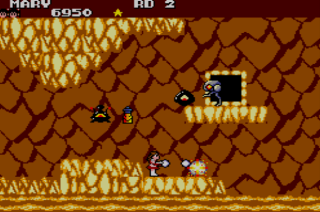 Before you can access that sixth and final round though, you'll need to find the 'Star Power' on each round. These are fairly unremarkable-looking stars but they are nonetheless essential if you want to finish the game properly. To that end they are rather predictably hidden, usually appearing when you destroy a certain enemy. Other items to keep an eye open for include a shield and a clock to freeze the enemies, both of which only last a short while, and there's also a smart bomb and weapon upgrade. These are all found seemingly randomly through the rounds which do not scroll automatically. Indeed, you can move in either direction at whatever pace you like, but you can't get too comfortable as there is a time limit of sorts. There are numbers beneath your character's name and I initially thought these were the score. When I looked more closely, however, I noticed that it was decreasing! 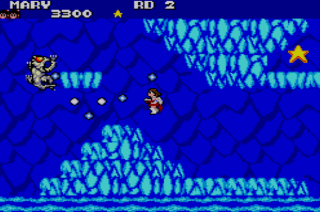 That's right, it's actually a time-limit which decreases even more quickly if you are hit by any enemies. Being hit when you're equipped with the jet-pack will also knock you to the floor too, where you'll have to continue on foot unless you can reach the jet-pack which remains at location where you were hit - particularly inconvenient if you were near the top of the screen! Indeed, this can be a pretty tough game, at least to start with. There are eighteen types of non-boss enemies and, while they only take a single shot to take down, they are also infinite, continually respawning from the same spot over and over, and they get faster and more aggressive as you progress through the rounds. Once you've learnt the location of the Star Powers, it's best to just leave these pesky things alone when possible. 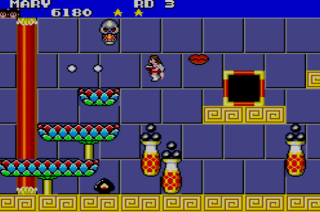 The first round is only a few screens long but they do get quite large. After the first one they are also split into several sections. Passage between these is via the 'warped doors' (which look fairly symmetrical to me). Their main purpose is to provide a little variety and that they do - although there's perhaps an over-abundance of blue, the backgrounds change regularly and new enemies are introduced each round as well which means there's always something new to see. The sprites are all small (even the bosses by bosses standards) but they are quite detailed and there's very little flicker or slowdown - this is probably one of the better-looking of the early Master System releases. The music is unfortunately less impressive with an average but repetitive tune playing throughout but I suppose you can't have everything! 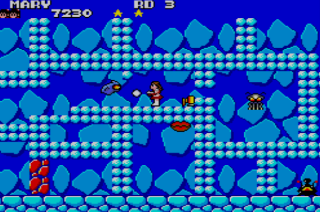 As a Master System game I've wanted to play for a good while, the time I've spent with Quartet over the last few days has been enjoyable, but as a conversion it's a little less impressive. In most other versions, you see, you can select which of the four characters you want to play as and each has their own strengths and weaknesses, but here you can't even choose from the two that were left in. If you can live with that though, this is a pretty interesting and playable game. The mixture of genres works well and it's good fun running and flying around, weaving in and out of the infernal enemies, especially when joined by a friend. It's certainly not the biggest game ever - a skilled gamer could finish it in ten minutes, but it will last most of us a lot longer than that. Quartet certainly isn't the flashiest game ever but it's well worth playing.