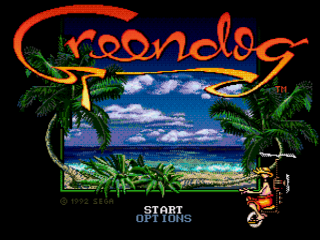 At the peak of the game mascot craze it wasn't just sentient animals who got their chance to be heroes. This effort, starring the laid back 'surfer dude' of the title is very much an American take on the subject and it's a game I always remember as being crushingly average. Okay, so it didn't exactly get ripped to shreds by the critics of the day but I don't recall ever having heard it spoken about with much enthusiasm or affection either. It always seemed to me that it was a game that had potential but, in the end, might as well have never been made. I never played it for these reasons but it does look quite intriguing so it's time for the Crap Games series to return to the poor old put-upon MegaDrive and see what this thrill-seeking nincompoop can offer. 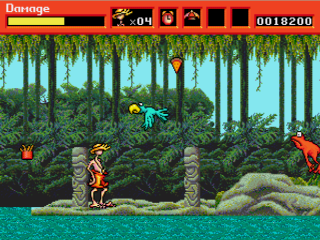 The backstory reveals that Greendog, ever in search of new and exciting surfs, is knocked unconscious by a freak wave in the Caribbean. He awakens in a strange but vivid dreamworld and finds himself wearing a magical but cursed Aztec pendant that can't be removed and which dooms him to be perpetually attacked by all wild creatures in his vicinity. The only way to lift the curse is to find six pieces of a sacred Aztec treasure which has been lost across the Caribbean islands. And so begins another side-viewed platform adventure which as you may have guessed is set over six levels - one per piece of treasure. They take in the delightful paradise islands of Grenada, Mustique, Curaçao, Jamaica, Saba, and St Vincent and each is split into two parts. 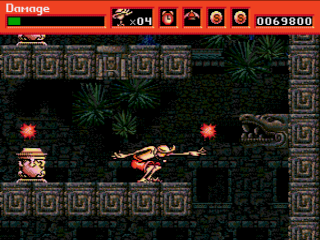 The first part of each level takes place on the island's surface while the second part takes place in caverns/passageways. Each of these underground sections alternates between either a standard platformy stage with a totem pole-like boss at its climax or an obstacle course which is undertaken on a skateboard or in-line skates. Splendidly, you also get to take control of Greendog as he makes his way between levels too, and this takes the form of a short airborne section on his strange pedicopter-like contraption which comes complete with extendible boxing glove! During all these sections, the probably-moronic beach bum is only wearing shorts so you would think him particularly susceptible to attack, and this proves to be the case. Almost all enemies encountered in the game cause him some degree of harm and there's quite a menagerie too. 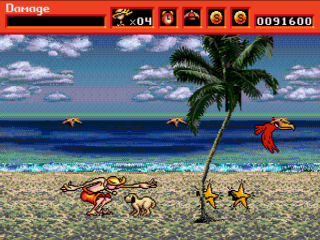 Indeed, most of the enemies are birds and beasts of a tropical variety, such as parrots, frogs, crabs, fish, etc, but later stages also introduce some human enemies like Caribbean women with fruit hats, tourists with cameras, and tribesmen who are all apparently angry to have a 'radical dude' like Greendog in their midst. The only weapon he has with which to see them off is his boomerang frisbee thingy. Many of them, as well as some inanimate objects through the stages, release various junk foods when hit which replenish his energy levels, but there are a few other items too which give him a homing frisbee, a shield, a clock to freeze the enemies, or a mini-umbrella for his head (all for a limited time). Most amusingly there is also an occasional canine companion who chases and takes out enemies for a short while! 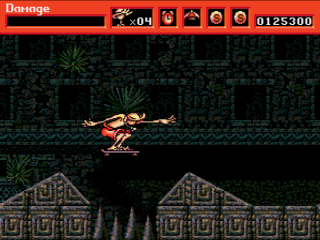 This is all well and good, but does the game deserve its place in the 'Crap Games' feature? Well, to be honest I'm not sure. The 'front end' is superb, for one thing. The presentation is great (there's even an intro) and the graphics are mostly nice too. The sprites are reasonably drawn, although the animation is somewhat lacking, but the background and foreground scenery graphics are great. The underground sections aren't bad, although a little dull and repetitive, but the 'surface' sections are gorgeous! They include beaches, tropical forests, and underwater areas and they all look delightful. Even better is the audio. The effects aren't bad but the calypso-style music is fantastic and well worth listening to on its own! 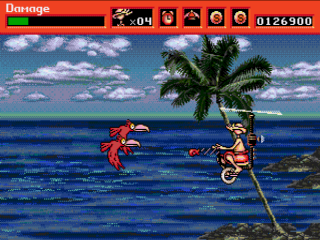 Exploring this lush Caribbean world with the tube-riding cretin is therefore a pleasure, surely? Well, I can definitely say it's not as bad as I was expecting, but there are still a few problems. Perhaps the 'biggest' one is just that - Greendog himself is quite a large fellow which means it's often hard to avoid enemies or traps when he's leaping about the place. Control of him is also quite sluggish and he moves almost in slow-motion at times. This effect is significantly worse in the underwater sections where his movement is slowed down to almost nothing, and the collision-detection also seems to be a little hit-and-miss. That said, it's not the most unfair game of all-time either. His energy meter is quite generous and there are always plenty of junk foods to fill it back up with again. 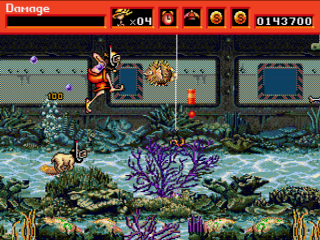 The stages are quite nicely designed with a decent attempt made to add some variety to them. The underground sections feature lots of traps and hazards like spikes and springers, the fourth stage features sections on in-line skates (complete with half-pipe!), and there's a couple of secret areas with bonuses here and there. Overall, it seems like Sega really made an effort with this game and it so nearly paid off. If you can put up with its shortcomings, Greendog is certainly a treat for the eyes and ears, but the fact remains that if it had poor graphics and music it would be a wholly insignificant game - at best a thoroughly average platformer, at worst a blatant demonstration of poor design. It's just a shame there wasn't a sequel where Sega could've ironed out the flaws here. So, not crap, but not great either.